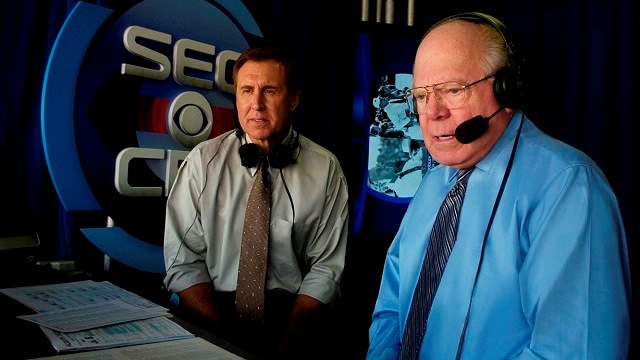 Verne Lundquist, right, will call his last regular-season SEC football game with Gary Danielson for CBS on Saturday, and it's a big one: the Iron Bowl. (CBS Sports)

After 53 years in the broadcasting business, he will put his finishing touch on one of college football’s grand rivalries, the Iron Bowl.

He will give it his best shot, wave to the crowd, probably get a little emotional, and walk away.

That’s how a broadcast professional does it.

“Verne Lundquist is a hall of famer in everyone’s book for what he has done and how he has done it for a long time,” Alabama coach Nick Saban said of the veteran CBS sportscaster. “He has always been fair and honorable to us, and we appreciate his professionalism.”

The Tide-Tiger rivalry is always big, and to add luster this year, Alabama will be gunning for its first perfect season since going 14-0 with a BCS national championship in 2009.

Alabama is favored by more than two touchdowns, but there have been so many twists and turns in this rivalry – the 2013 “Kick Six” game, for example – that nothing can be taken for granted.

Gus Malzahn was in his first season as Auburn’s head coach for that one. Lundquist, in the booth at Jordan-Hare, called it “the greatest finish I’ve ever seen.”

“We are thankful for all that Verne has done while serving as the voice of college football in the SEC during the last 17 years,” Malzahn said.

“He really makes it special for the fans, the players and the coaches and has that knack to always say the right thing in the biggest moments.”

A heads up from the coach

Lundquist, said SEC Commissioner Greg Sankey, “has told the story of SEC football on autumn Saturdays literally since the turn of the century. He has added the color and excitement that brings football to life on the screens of millions of college football fans every week.”

Gary Danielson has shared the booth with Lundquist since 2006, and the two have become close friends.

In a recent conference call with reporters, Danielson was asked about Lundquist, and he answered with high praise, saying, “Verne is a legend in this business. I think he has been as important to the SEC as Bear Bryant.”

Lundquist and Danielson meet with coaches a couple of days before a game. Sometimes a coach will give them a tip: Be alert for this play, or watch out for that one.

After Saturday’s game and the SEC Championship Game on Dec. 3, Lundquist will turn the mike over to Brad Nessler as the voice for SEC football in 2017 and beyond.

“I’ve known Brad for more than 30 years and have always admired his work ethic and his on-air presence,” said Lundquist. “He shares the same passion for college football that I do.”

For “Uncle Verne,” as he is sometimes called, there will still be network assignments in college basketball.

And in early April, he will work from the tower behind the 17th green at Augusta National.

It was there that he made a memorable call when Jack Nicklaus rolled in a birdie putt that capped his sixth Masters championship.