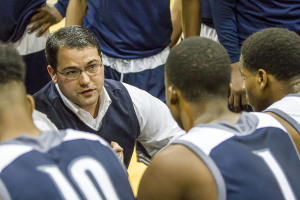 IRONDALE – The Clay-Chalkville Cougars jumped on the Shades Valley Mounties on Monday night and put the hosts away early in a 49-34 win.

Five different Cougars scored in the first period as Clay moved out to a 15-8 lead.

An Anthony Holmes follow with 1:30 left in the half built the lead to 20 and the Cougars led by 18 at the break.

Shades Valley picked up the intensity in the second half and Clay-Chalkville lost some of its focus with the huge cushion.

The Mounties cut the margin to 16 with less than two minutes in the third quarter, but Colin Bryant’s lay-in pushed it back to 39-21 after three quarters.

Three quick baskets in the fourth period by sophomore Jovan Gale off dishes from his teammates built the lead back to 45-25 and the Cougars eased in.

The relentless Cougars’ defense forced numerous turnovers and the Cougars did a good job of limiting Shades Valley to one shot on the offensive end.

Prior to the win over Shades Valley, the Cougars captured the championship of the North Shelby Tip-Off Classic Tournament, beating Southside of Gadsden 62-37 in the opener as Holmes scored 18 and Jordan added 10.

In the semifinals, Clay topped Childersburg 60-53, thanks to a strong second-half effort. Jordan scored 27 and Caleb Toney added 11.

In the final, the Cougars knocked off Talladega 50-47. Jordan scored 22 points to take MVP honors and Holmes scored 11 and made the all-tourney team.

Clay-Chalkville meets Hewitt-Trussville for the first and only time this season Friday night at Bryant Bank Arena in Trussville. Tip is scheduled for 7:30.

Hewitt-Trussville boys: The Huskies dropped a 73-71 heartbreaker at Hueytown on Monday, then were set to visit Pell City on Tuesday before returning home to face Clay-Chalkville on Friday.

Pinson Valley boys: The Indians dropped an 80-70 decision to Pelham on Tuesday.

Center Point boys: The Eagles boys beat Carver 53-50, lost to Minor 66-61 and then dropped a 57-49 decision to Midfield on Monday night. Shy’Im Cunningham scored 18 to lead Midfield as he continued his string of double-digit games. The 6-4 senior wing is averaging 17.7 points a game. The Eagles led 27-24 at halftime, but the Patriots put it away with a 19-point fourth quarter.

The Eagles beat Woodlawn 54-39 Thursday and go to Ramsay for a Friday contest.