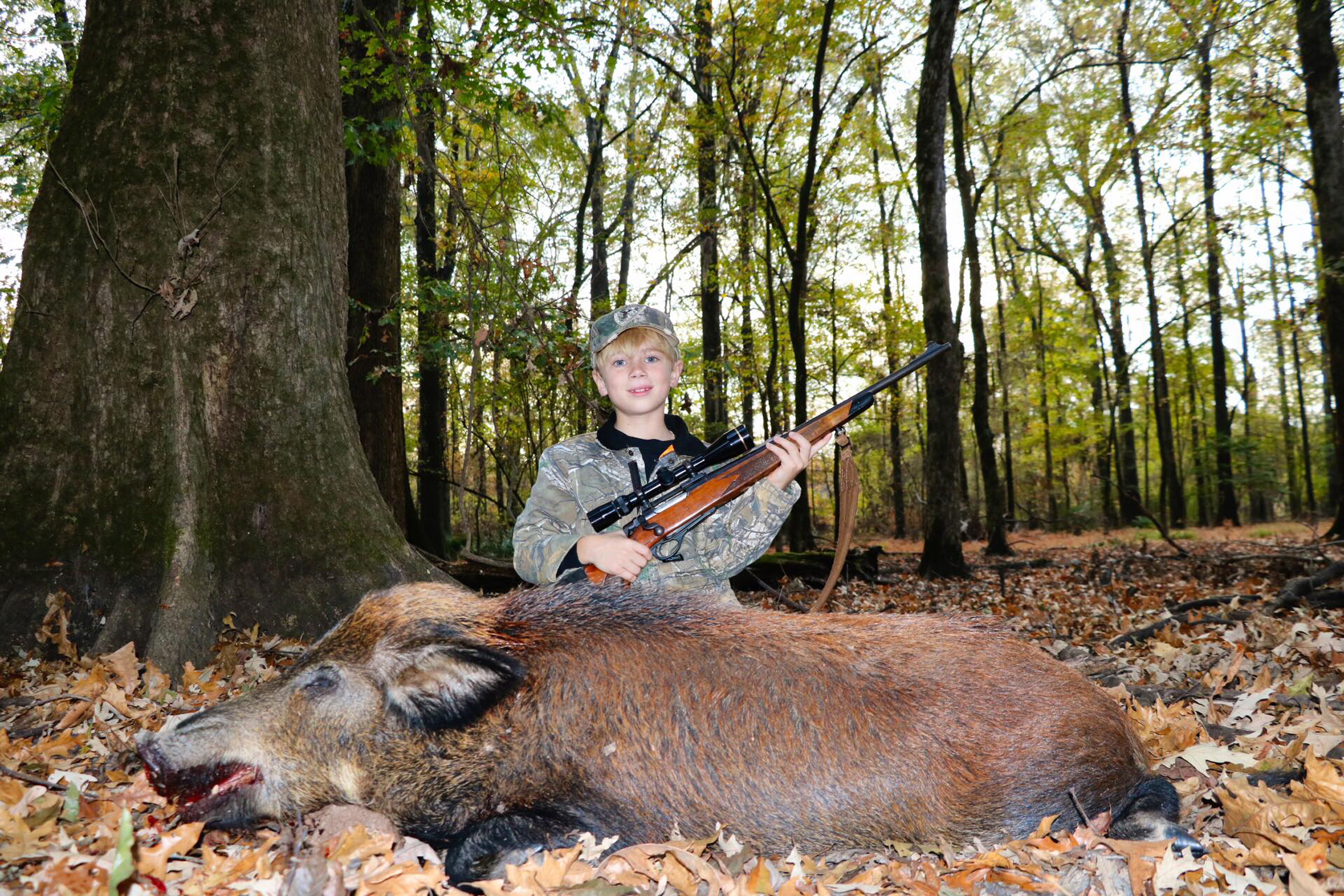 Hunting and shooting hogs at night with a permit provided a great outdoors opportunity for William Malone of Camden and his son, Andrew, but those control methods have not been able to thwart the hog expansion.

Despite a combined effort to loosen regulations on removal and to increase awareness of the problem, the feral hog population has now reached all 67 counties in Alabama.

Chuck Sykes has been dealing with the scourge of feral hogs for years, now as Director of the Alabama Wildlife and Freshwater Fisheries (WFF) Division, and previously as a private wildlife consultant. Sykes said some landowners are making progress. Others, not so much. 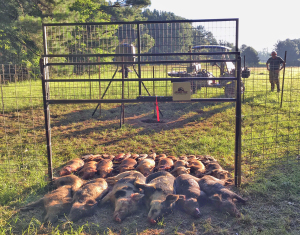 The most effective method to deal with a feral hog problem is to trap the entire sounder or social unit in an enclosure with a trap door that can be triggered remotely using a smartphone app.

“It just depends,” Sykes said. “Some places are; some aren’t. Places that are on year-round trapping programs and practicing whole sounder (family group) removal, yeah, they’re making good headway. People who are trapping sporadically or thinking they’re doing any good night hunting or hunting over bait (both of which are not allowed during deer season), they’re fighting a losing battle.”

Sykes, who has been WFF Director for four years, said he dealt with feral hogs a great deal before he became director.

“Back in the day when I first started trapping hogs with box traps you’d catch one or two and think you were doing a good job,” he said. “With trail cameras you could see you were only catching a portion of what was there with traps they tripped themselves. Now there is a lot of technology out there with corral-type systems that causes the door to fall using your cell phone. That’s the only way to do it now. Everything we do is a learning process. Ten years ago, box traps were the best thing going. Then you had a corral trap with a root stick or a push door. Now you have corral traps with electronic doors. There’s no telling what’s going to be coming in the future.

“I’m not saying people need to quit what they’re doing. I’m just saying that whole sounder removal is the only way to make significant headway, with electronic doors that you can activate when you want to.”

The small farm of Tes and Ron Jolly near Tuskegee is a perfect example of what Sykes just proposed.

The Jollys’ first hog sighting occurred in 2004, and they’ve been in a battle ever since.

“Rumor was a neighboring hunting club brought them in and turned them loose to hunt,” said Ron of a practice of transporting live feral hogs that has now been banned in Alabama.  “Since that time, we’ve been losing ground ever since. We tried shooting them. We tried box traps.”

The hog problem became so bad for the Jollys that they were unable to grow crops that would benefit the preferred wildlife, mainly white-tailed deer and wild turkeys.

“We can’t grow chufa,” Ron said. “We can’t grow corn. Even in the green fields, when the wheat makes heads the hogs get it. It really limits what we can do. As a result, we haven’t killed a mature buck that weighed more than 200 pounds in a while. Four- to five-year-old bucks used to average between 210 and 215 pounds. The last three years we’ve killed four- and five-year-old bucks that weighed 175 to 185 pounds. I think that’s a direct result of what we had to do, which is not grow corn and stuff they can feed on in the summer time.

“We had to change everything. Quite frankly, the best thing we’ve done is plant clover in our green plots, which provides forage to the middle of June. After that, they’re on their own.”

Tes and Ron finally made the decision to invest in one of the trapping systems with an electronically controlled trap door.

“For the first time in six or seven years at least we feel like we’ve got a fighting chance,” Ron said. “Two different neighbors have also bought the systems, and we’re trying to build a co-op with other landowners. If a sounder comes on the place now, I feel like I’ve got a chance to get them all. It may take me a month to do it, but we’ve caught 47 hogs in the trap since the Fourth of July.”

The system the Jollys purchased allows remote monitoring of the corral and remote activation of the trap door.

“That’s absolutely the way to go. I’m sitting in Montgomery, and if a hog goes in the trap I can catch him,” Ron said. “The main thing it allows me to do is not drop the gate on two of 10. When we drop the gate, we know how many pigs are inside. We can drop the gate when all of them are inside and we can get them all.

“The answer is total sounder removal. And we need to expand our cooperative to get other people helping with the removal. I can do it, but if the guy across the fence is not doing it, all he’s doing is growing pigs for me to catch.” 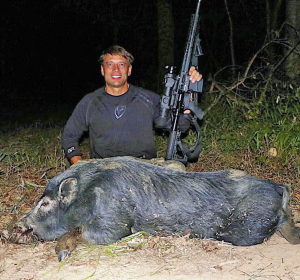 Hunting and shooting hogs at night with a permit provided a great outdoors opportunity for William Malone of Camden and his son, Andrew, but those control methods have not been able to thwart the hog expansion.

The Alabama Cooperative Extension System (ACES) is trying to help with that effort to band landowners together in their battle against the hogs.

ACES has teamed with other agencies such as the Natural Resources Conservation Service (NRCS), Alabama Wildlife Federation and Alabama Soil and Water Conservation, to name a few, to develop a pilot program to both educate the public on the feral hog problem and provide information on traps from the cheapest option to the latest technology in hog traps.

The project involves purchasing a trailer that publicizes hog control efforts through a graphics message on each side. The trailer can be transported around Alabama to complement the seminars being conducted on hog control.

The second part of the project is to provide the public with the opportunity to rent one of the trap doors that can be monitored and closed remotely via a smartphone app, though the project is in its infancy and details are still being worked out.

“We have noticed that hogs are showing up on trail cameras in areas they have not been seen before,” Brock said. “I’m getting requests for technical assistance from landowners who have never had hogs on their property before, so it appears they are still expanding their range. They are definitely on the move.

“And I don’t know how the drought is going to affect that. The last few complaints I’ve had were from people with farm ponds they use for livestock. The hogs have shown up because it’s about the only source of water unless they’re on a major creek or river drainage. The farmers don’t know what to think. They’re seeing them for the first time and are concerned about the impact of the hogs. The biggest question is what they need to do.”

Brock said he’s been making site visits to educate the landowners on what to do to prevent the hogs from doing extensive damage. The estimate of agricultural damage done by feral hogs is $1.5 billion annually in the U.S.

“The best answer to hogs is trapping the whole sounder,” Brock said. “That’s what I’ve been encouraging people to do. People will go out and shoot hogs. They think that by shooting two or three it might help eliminate the hog problem. In actuality, it doesn’t. I tell people to be patient and start pre-baiting. Try to find out how many are in the sounder. Then get them all to come into the trap together, even if it takes several weeks. Our goal is total sounder removal. That way you can remove that entire social unit from that particular area. Then monitor the area, and do it again if the hogs move back in.”