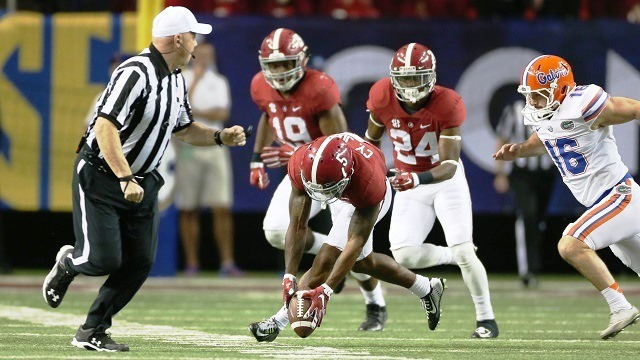 Alabama and Florida return to the Georgia Dome for the SEC Championship for the second year in a row. (Kent Gidley/UA Athletics)

A maintenance crew was busy painting the field of the Georgia Dome, readying for Saturday’s SEC Championship Game. Someone tweeted a photo of staffers painting the encircled script ‘A’ emblem of the University of Alabama.

“This stencil we use to paint the Alabama ‘Circle A’ logo has been used A LOT in the past few years,” the tweet read.

Alabama’s trip to the 2016 SEC Championship Game isn’t just a meeting with an old foe in Florida.

It’s also the renewal of acquaintances with an old friend – the Georgia Dome. The days of that friendship are numbered as this is the final season for the dome, which will give way to the Mercedes-Benz Stadium that’s under construction next door.

The Georgia Dome in downtown Atlanta opened in 1992 and hosted its first SEC football title game two years later. In that time, the Alabama football team has made itself at home.

Alabama’s all-time record in the Georgia Dome is 9-2. Its notable games there include:

Brad Nessler, who takes over for Verne Lundquist next season as the play-by-play voice for “The SEC on CBS,” says Alabama’s frequent trips to the Georgia Dome are part of Nick Saban’s master plan.

“He wants to start a season someplace, tell his kids we’re going to be back here for the SEC Championship and, in the case of this year, be back for the semifinal on New Year’s Eve,” the veteran broadcaster said. “I think they are comfortable here. I bet you they stay at the same hotels, I bet they go through the same routine, whether it’s the first game of the season or the SEC Championship or the playoff.

On his radio show Thursday night, Saban was asked about the Tide’s “dome” away from home.

“I think the exposure in these games, whether they’ve been the opening games of the year that we’ve played there or the championship games that we’ve been fortunate enough to create opportunities to be able to play in have (all) been things that have had tremendous impact because of the exposure that it brings,” Saban said. “Certainly, it helps anywhere in the Southeast in recruiting because Atlanta is a little bit of the hub of the South in a lot of ways. But I also think that there’s a lot of good football players within a four- or five-hour radius of that and that exposure also helps us in recruiting long term.”

Don’t be fooled into thinking the Tide’s success is just about playing in the capital of Georgia. Alabama has a 15-15-3 record all-time against Georgia Tech at its home, Grant Field.

“Well Coach Dodd was around in those days,” Nessler said laughing while speaking of legendary Tech coach Bobby Dodd. “That’s another guy who knew what he was doing, for sure.”

Bill Curry used to discount the significance of home field. But he’s changed his mind as he’s seen fans affect calls made at the line of scrimmage, especially with hurry-up, no-huddle offenses.

“I think home-field advantage is now huge,” he said. “Alabama, unless they play Georgia in the Dome – and I think that happened once – only then would (Alabama) have a disadvantage. They’re going to outdraw the opposition no matter who it is.”

Alabama played Clemson in the first Chick-fil-A Kickoff Classic in the Georgia Dome in 2008 and the Tide has been there four times for that event. Alabama has the potential to play in Atlanta five times over this next year. After this year’s SEC Championship, the Tide could play in this year’s Chick-fil-A Peach Bowl national semifinal. It is set for next year’s Chick-fil-A Kickoff game against Florida State to start the season at Mercedes-Benz Stadium.

Beyond that opener, it could find itself in next year’s SEC Championship and then, in January, the National Championship game.

“We’ll be wearing out I-20 heading this way,” said Gary Stokan, president and CEO of the Chick-fil-A Peach Bowl. “Atlanta’s kind of the New York of the South so for a lot of reasons people want to come here for entertainment. We also have the No. 1 base of Alabama alumni living in Atlanta so that kind of makes it easy for them as well.”

That alumni base was never more evident than in 2014 when Saban was tabbed as the Bobby Dodd National Coach of the Year. Traditionally, the selection committee has an event for the winning coach on his school’s campus, but Alabama took a different turn.

“In Alabama’s case, the administration asked if we could have it over here (in Atlanta) because they had so many alumni over here who wanted to be included,” recalled Curry, a member of the selection committee. “We had it in a hotel ballroom over here and we had a huge turnout. For Alabama, it was like a home visit. There are a lot of Alabama folks around here.”

Ironically, Alabama has never played in the Peach Bowl, or the Chick-fil-A Peach Bowl as it is known today. Now that it is part of the playoff rotation, the Tide will look to return to the bowl often.

An Alabama win Saturday over Florida would put the Tide into the playoffs, and likely send it to the Chick-fil-A Peach Bowl for the first time in 48 years.

“Of all the teams and as good as Alabama’s been, we’ve never had a chance to host them,” Stokan said of the postseason event. “In our kickoff game, with our relationship with Nick and (athletic director) Bill Battle, we’ve been able to have them over here four times since 2008. It’s kind of ironic it’s worked out that way.”