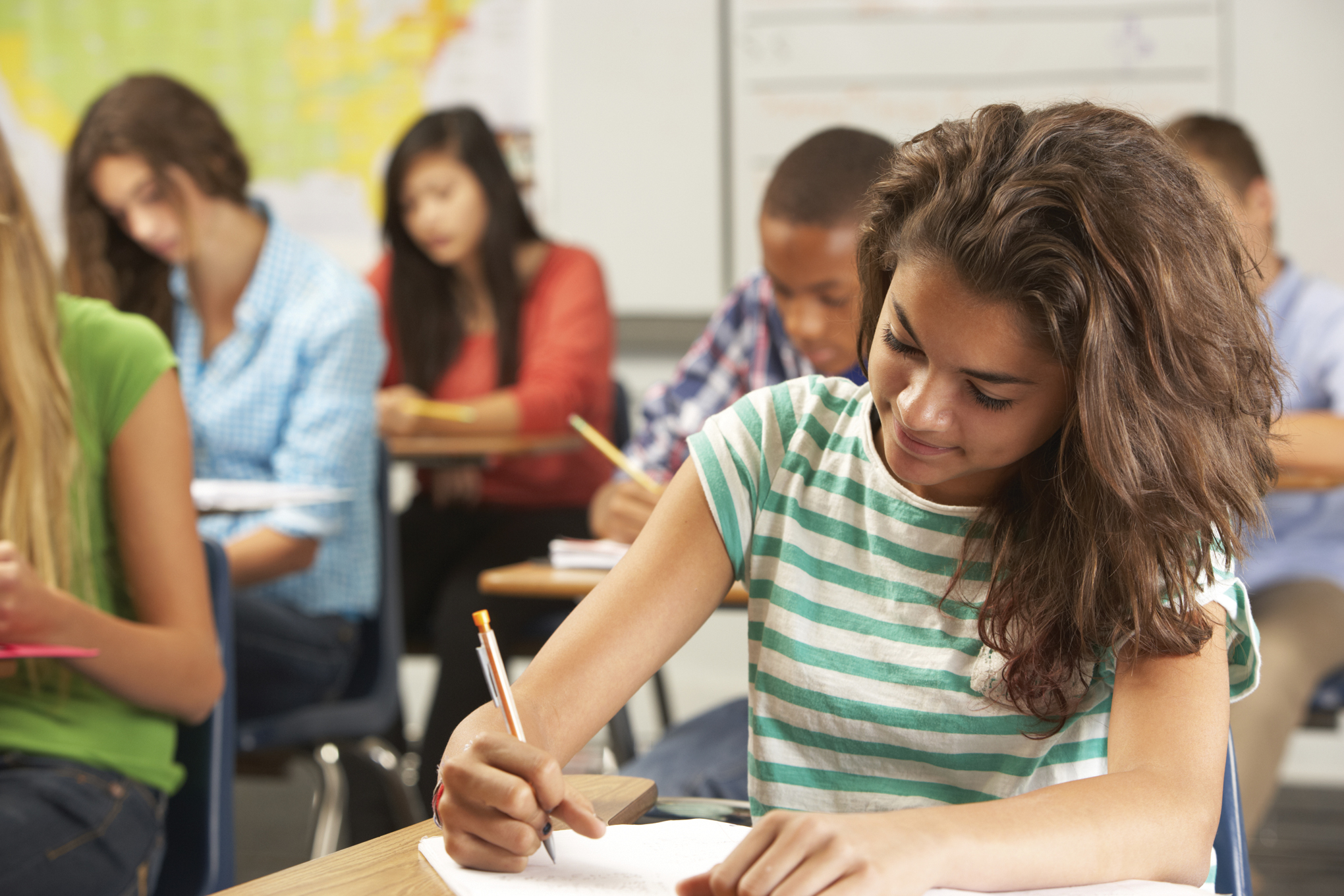 School Report: The middle school test scores are in for Trussville, Clay and Pinson

TRUSSVILLE –This is the second of a three part series in which The Trussville Tribune will examine the test scores in area elementary, middle and high schools.

In the 2013-14 school year, Alabama students in grades three through ten began taking the ACT Aspire test which measured student progress in math and reading on a national scale. The initial scores were an awakening for state schools. Previous testing routinely produced high results from even struggling schools, but the ACT Aspire revealed Alabama students were woefully behind when measured nationally in terms of college and career readiness.

The third year of test results have now been released and show some local schools are still struggling, though showing progress. Other students have surged to among the best in the state.

As content become more advanced and new life challenges present themselves, Alabama students’ scores show a tendency to drop as grade levels increase. Local school officials are working to identify contributing factors and find new ways to combat the effect in order to prepare their students for the future.

Phyllis Faust, Test Coordinator for the Trussville City School System, pointed out that students in middle school face changes that can cause academic pursuits to take a back seat. This can cause test scores to decrease as the grade level rises. “Research shows that this is the trend, that it kind of tends to go downward,” she said, explaining that physical and emotional changes, as well as the introduction of athletic pursuits and other new factors can all play a part. 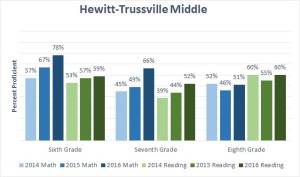 “Elementary school students are used to wanting to please their teachers and do well,” Faust added. But as those same students move into sixth and seventh grade, that changes. “They’re wanting to fit in a lot of times more than they’re worried about their grades,” she said.

Scores above state average are not unusual for Trussville City Schools, and Superintendent Patti Neill credits students’ high scores to a number of factors, starting with the students themselves. “I believe what sets our students apart from the state is the fact that they’re ready to learn when they come to school,” Neill said. “And when they start out ready to learn in kindergarten, then we can accelerate their learning quickly.”

She also credited the students with an “outstanding” work ethic. “Our students work hard, they do their homework, they are ready to move to the next level,” she said. “And if they’re bored in class, they will ask questions that show that they’re bored, and then we can move them forward when they’re ready.”

In addition to providing extra study time during the day, subjecting students to multiple evaluations each year and providing a response-to-intervention program, Neill says that teachers and administrators are interested in helping students own their data. She explained that, often times, students are unaware of what tests they’re taking or how they did on them. “We need to talk about it, and that’s what’s happening now,” she said.

At Rudd Middle School in Pinson, changes implemented over the past few years are beginning to show results. While sixth-grade math scores are hovering at 37 percent, seventh-grade scores rose from 19 percent to 23 percent last year and another thirteen percentage points to 36 percent in 2016. Eighth-grade scores showed a similar increase, rising from 11 percent in 2014 to 23 percent this year. 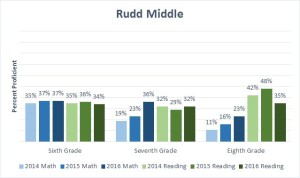 “What kids have to understand is, every year they move up in school, the rigor moves up with them,” said Principal Susan Slaney. Rudd Middle School is a part of the Literacy and Math Design Collaboratives with the Southern Regional Education Board, and Slaney explained that teachers are working to prepare students for more higher levels of work.

“For so many years, kids were doing more of the basic recall,” she said, “so that when you ask them to do something higher level and really think and struggle, it’s been a little bit of a learning struggle for them to understand that they have to persevere.”

Teachers at Rudd Middle School are also finding ways to blend teaching styles from elementary school into their classes in order to more effectively present information. In addition, the school has begun hosting “data days” to help kids know whether or not they are on track.

While the staff is happy to see grade levels’ scores rising from year to year, Slaney also emphasized the importance of watching classes as they move through their school careers. “And really for the first time, we’re beginning to see… that decrease in scores is beginning to kind of level off,” she said. “So that’s what really matters. Because then, you’re comparing the groups of kids to themselves, instead of comparing totally different kids who have totally different experiences.”

The school is in its second year of the design collaboratives, and all of the teachers will be trained next year. “That is really focusing on kids using multiple disciplines to complete tasks that are much more higher level, asking them to collaborate with others, problem solve, things that they’re going to have to do in the real world, whether they’re working or in college,” Slaney said. “If we’re not teaching them that they have to struggle and work hard, we’re setting them up for failure, because we’re not preparing them for the real world.”

The staff at Clay-Chalkville Middle School are implementing similar changes and challenging students to push themselves. Sixth-grade math scores rose from 23 percent to 28 percent in 2015 and continued to rise this year, landing at 37 percent. While seventh and eighth-grade math scores both showed slight decreases from previous years, reading scores are recovering from a school-wide dip in 2015. 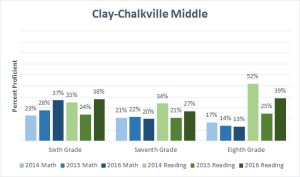 “We realized that a lot of the ways that we’re questioning, the way that we’re working with our kids, we’re not teaching or enforcing those higher-level thinking skills,” Principal Ronald Tillman said. “So we’re trying to change the way that we question the students in class and the way that we do things so that it does force them to get into more of a deeper probing of the lesson.”

Like Rudd Middle School, Clay-Chalkville is working with the SREB on the Literacy and Math Design Collaboratives. The program requires students to work out problems among themselves and discuss their answers with other groups. “It’s really neat to watch them walk around, and it’s just more of a collaborative learning environment,” Tillman said. “I think that’s what the ACT and the Aspire does differently than what we had done in the past, is it causes you to not just know what, but why. And so, we’re approaching it that way.”

For students in need of remediation, Tillman explained that the school uses Compass Learning, which helps reinforce certain concepts that need more attention. “If they have a weakness… they can go to Compass Learning, the teacher can put that skill in there, and it will actually give a lesson to the child,” he said. He also explained that he system administers tests before and after the lesson to determine whether or not the student is ready to move on.

Overall, the staff at the school is working to challenge students to work harder and think on a deeper level. “We’ve had to change the way that we looked at our classroom and how we present our material,” Tillman said. Rather than simply presenting the facts, teachers at Clay-Chalkville Middle School are encouraging students to dig into the lesson and ask questions.

While a number of factors can cause scores to lower as grade levels increase, local middle school officials are studying ways to encourage higher learning skills. As they place an emphasis on the importance of testing, change the ways that information is presented and challenge students to push themselves, teachers and principals are beginning to see changes in their schools’ results. In the future, they hope to close the gap between grade levels and keep kids on track for life after graduation.