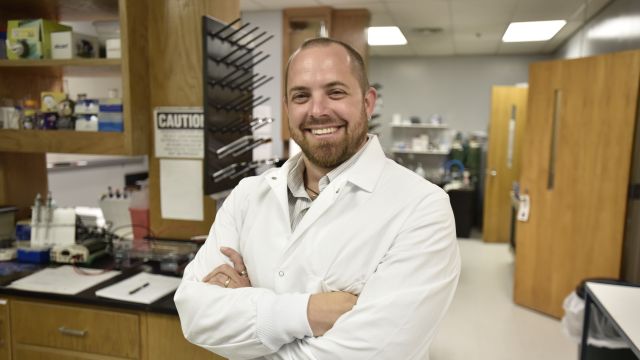 Hundreds of UAB researchers are working on medical cures and answers that hold hope for millions. For example, UAB's Robert Sorge, Ph.D., researches the interplay between addiction and pain, as well as how the immune system can influence the perception of pain. Last year, the Rita Allen Foundation granted Sorge $50,000 a year for up to three years to support his research. (Alabama NewsCenter)

Newly released research funding data from the National Science Foundation shows the University of Alabama at Birmingham ranked No. 18 nationally among public universities and No. 34 overall in federally financed research in 2015, with more than $328.5 million in spending. UAB’s total research spending exceeded $516 million in 2015, ranking the institution No. 25 among public universities and No. 41 overall nationally.

“As we change the world for the better, it is critical to grow a research enterprise that supports every area of our mission, from education to patient care, community service and economic development,” Watts said. “We continue to aggressively and purposefully support our students, faculty and staff involved in research, recruit prominent scientists and research teams to campus, and leverage strategic partnerships like the one we have with Southern Research to expand our results and influence.”

In 2015, UAB secured more federal research funding than all other public universities in Alabama combined, accounting for roughly 63 percent of such funding. The next-highest-ranked institution in Alabama was the University of Alabama at Huntsville, which ranked No. 132 with $67 million. At No. 34 in federal research expenditures, UAB ranks sixth among Southeastern universities, behind only North Carolina (8), Duke (10), Georgia Tech (11), Vanderbilt (24) and Emory (27). UAB ranked No. 22 overall in Life Sciences, as well as No. 22 overall in funding from Health and Human Services and No. 10 nationally among public universities.   “UAB recently vaulted 36 spots in U.S. News & World Report’s Best Global Universities, due in large part to our growing world impact in research, and these NSF figures are further evidence of our prominence among the most distinguished comprehensive research universities,” Watts said. “I want to recognize the significant contributions made by our faculty, staff and students, as well as those of Vice President Richard B. Marchase, Ph.D., who will retire from research administration at the end of the year after 30 years of service to our institution.” “UAB is well-positioned as a leading comprehensive research university and poised with the right people to maintain the positive momentum demonstrated by the NSF data,” Marchase said. “It has been an honor to work with our students, faculty and staff who have made UAB’s and Birmingham’s growth possible.”   Christopher S. Brown, Ph.D., was recently named UAB’s vice president of Research and will start Jan. 23, 2017. From 2012-2016, Brown served as the vice president of Research at the University of North Carolina System, with its 16 public universities, $1.35 billion in research awards in 2015 and 225,000 students. New awards for UNC System research grew by $125 million during his time as vice president.

Brown has more than 26 years of experience in research, teaching, research program leadership/management/development, strategic planning, and university/government/industry collaboration and is charged with broadening UAB’s research portfolio across campus and driving strategic planning and research operations. He will leverage fresh approaches to help faculty and students successfully compete for large federal, corporate and foundation grants.   Brown comes to UAB from North Carolina State University, where he is a professor of plant and microbial biology and works across disciplines to develop large-scale research teams. He is the director and principal investigator of the NASA/North Carolina Space Grant, as well as chair of the 50-state National Space Grant Alliance.