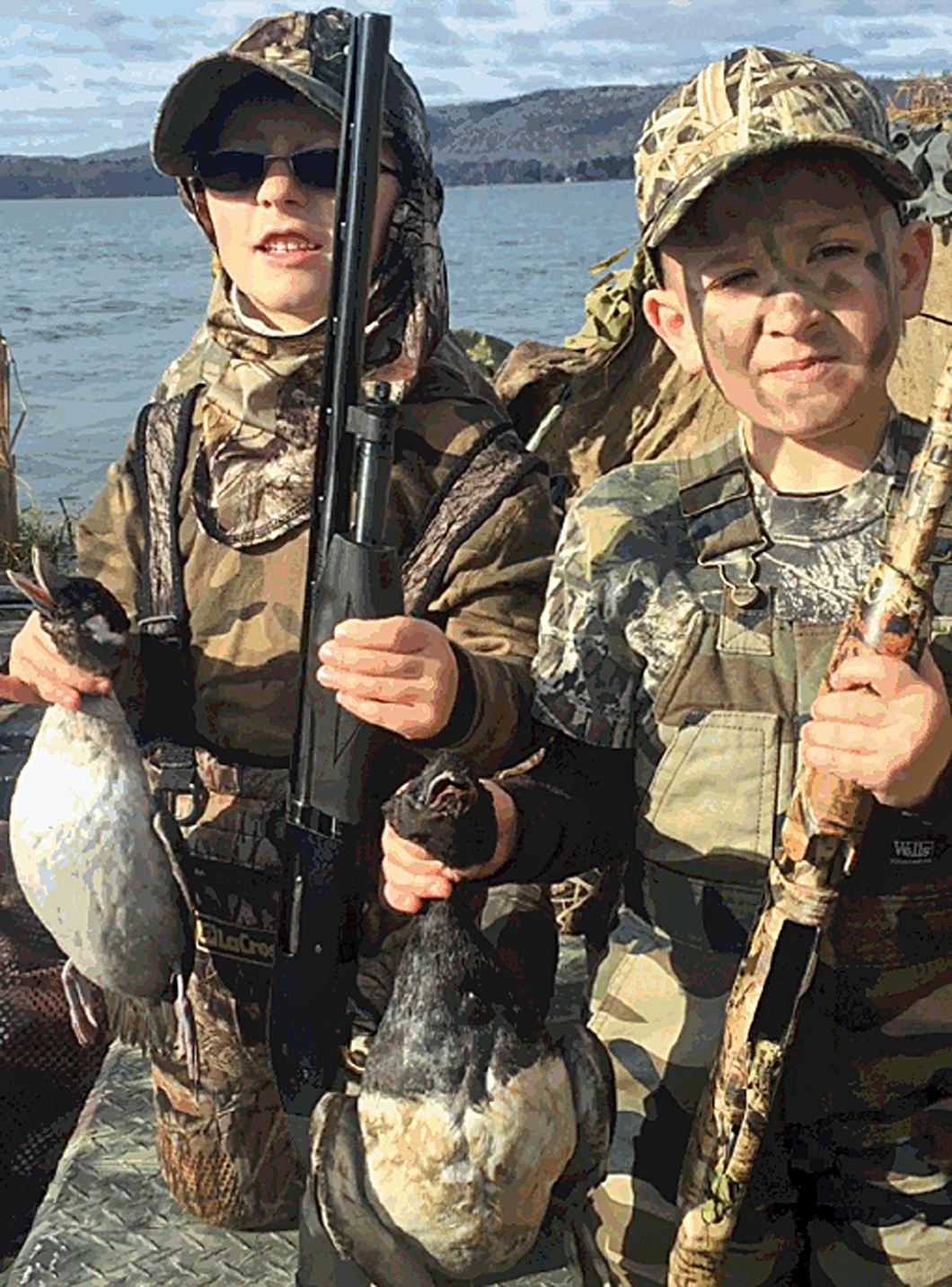 A pair of young waterfowl hunters had success on the Tennessee River. Jaxon Godwin, left, bagged a female bufflehead, while Eli Walston scored on a lesser scaup, otherwise known as a bluebill. (Clinton Walston)

Alabama waterfowl hunters who ventured out on opening weekend will probably have to expand their territory after several recent rain events have changed the amount of water currently available to the ducks.

“Earlier in the year we were in an extreme drought situation throughout Alabama, especially northeast Alabama,” said Seth Maddox, Waterfowl Coordinator with the Alabama Wildlife and Freshwater Fisheries Division. “We had a pretty good number of waterfowl here for the youth hunt and the start of the season.”

Wildlife and Freshwater Fisheries (WFF) conducts aerial surveys in the areas that tend to hold the most waterfowl in the state, including the Mobile-Tensaw Delta and the Tennessee River drainage.

Normal waterfowl habitat like beaver ponds and farm ponds had little water to hold ducks during the height of the drought, and bottomland hardwoods were not flooded like they have been in previous years. The state is still in a significant rainfall deficit despite several days of rain.

Maddox said as opening weekends go, the weekend of Nov. 26-27 was not bad, probably helped because the waterfowl were concentrated because of the lack of water.

“Hunters had pretty good success in most places on opening weekend,” he said. “A lot of hunters had birds when they were coming out of the field. And the youth Saturday the weekend before the regular season opened was good, too. A lot of the youth had birds. I think that was a big success.”

Now that Alabama finally got some rainfall, Maddox said the ducks will likely be expanding their range significantly.

“That rain makes a lot more habitat available to the waterfowl,” he said. “The ground did soak up quite a bit of the rainfall, but this new round of rain will definitely help the situation. The birds won’t be as concentrated anymore, but there will be a lot more available habitat for the hunters and the birds to take advantage of.”

In Mobile Bay and the Mobile-Tensaw Delta, where water levels aren’t affected as much by the drought, Maddox said the typical array of waterfowl has been seen this fall.

“We saw a lot of gadwalls and some shovelers,” he said. “We did the aerial survey on Nov. 18, right before a cold front came through. The count was about average for that survey. But I talked to Thomas Harms, our biologist down there, and he said the cold front pushed a lot more birds in after we conducted the survey.”

On opening weekend in the Mobile area, the main birds in the hunters’ bags were gadwalls and ringnecks. Gadwalls are dabbling ducks and stay in shallow water where they can eat mostly vegetation. Diving ducks, like ringnecks, will add crustaceans, mollusks and other invertebrates to their diets.

“We didn’t see many divers when we did the survey, but Harms said they’ve got a little bit of everything down there right now – redheads, teal and a few scaup.

“In north Alabama, gadwalls kind of rule the state as far as dabbling ducks. On the west side of the Tennessee River – Wheeler, Wilson and Pickwick (lakes), 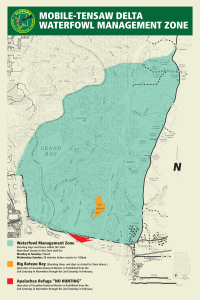 “If we get a little more rain, I think it’s going to open up some of the bottomland habitat, especially if it starts flooding some of the hard mast crops in the hardwoods,” he said. “Acorns are a favorite food of wood ducks and mallards. If you’re looking for greenheads (male mallards), that’s one of the best places to find them.

“And if we get some water in the beaver ponds, it will open up habitat for wood ducks to use across the state.”

Maddox said while the reservoirs along the Tennessee River were affected a little by the drought, it was the smaller areas with food sources for the waterfowl that were impacted the most.

“All the reservoirs were below what they normally are this time of year,” he said. “The main problem was we were struggling on the Wildlife Management Areas (WMAs) to get any water at all. We struggled to get our agricultural crops to come up this summer. But we had decent luck with our moist-soil vegetation. That native vegetation should provide good food sources for the waterfowl going into the winter.”

Maddox said the most popular places to hunt ducks in Alabama include the Jackson County Waterfowl Management Area, Swan Creek WMA, the Seven-Mile Island area in Lauderdale County and the Mobile-Tensaw Delta.

Despite less than favorable conditions for waterfowl hunting, Maddox said Alabama hunters have not been deterred from participating in the season.

“I worked opening weekend in Jackson County, and every boat ramp in the county was full or overflowing,” he said. “From what I’ve seen, I think we’re going to be right on par with what we’ve seen the last few years in the number of duck stamps sold. We sold about 30,000 last year, which has been about what we sold for the last several years.”

Waterfowl hunters are required to have a valid hunting license, federal duck stamp, state duck stamp and HIP (Harvest Information Program) privilege to hunt waterfowl. Only steel shot or other approved waterfowl loads are allowed. The bag limit is six ducks with no more than four mallards, only two of which may be female, three wood ducks, one mottled duck, one black duck, two redheads, two pintails and three scaup. The duck and goose seasons run through January 29, 2017.

There have also been several changes in the waterfowl regulations in the Mobile-Tensaw Delta. The 210-acre Apalachee Refuge was created in the triangle-shaped region between I-10 and the Mobile Causeway, west of the Apalachee River. The Refuge provides a resting area for waterfowl, prohibiting any hunting in this area and the operation of gasoline-powered motors from the second Saturday in November through the second Saturday in February. Big Bateau Bay also has the same restriction on the prohibited use of gas-powered motors but is open for hunting. The Waterfowl Management Zone in the Mobile-Tensaw Delta also has new shooting hours and is closed on Mondays and Tuesdays. Hunting is allowed from 30 minutes before sunrise to 1 p.m. Wednesday through Sunday.