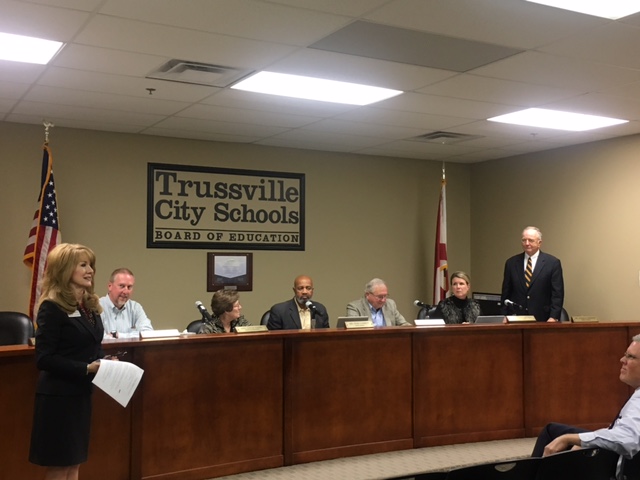 Donald Sweeney recently received the first ever Legacy Award from the Alabama Association of School Boards for starting the Lawyer’s Council for the School Board Attorneys. Superintendent Dr. Pattie Neill said Sweeney was honored in a ballroom of around 300.

Sweeney said his father grew up in a rural town in Iowa during the depression.

“When a teacher told him there was a college after high school, he had no idea that was a possibility,” Sweeney said.

The teacher helped him get afternoon jobs, and he saved for three years to attend college. By the time he got there, he only had enough money to take a year and a half’s worth of courses.

Sweeney said this makes him incredibly thankful to work with the Trussville City Schools BOE.

“The real accolades they should have announced is I got to help form this school system, and that’s a real feather in anyone’s cap,” Sweeney said. 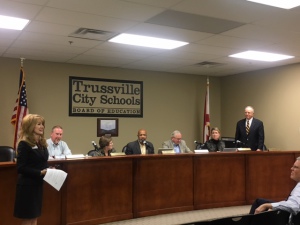 The consent agenda was also approved in full, which included an update to policy 4.01, which was discussed during the work session that preceded the meeting. This is the admission policy for homeless, migrants, immigrants, ELL students and now students in foster care.

The policy now offers protection to students in foster care so they don’t get lost within the school system.

During the work session Dr. Neill also gave a recap of the city services meeting that took place after the Magnolia incident in November.

“In that debrief meeting, we went through every minute detail, the events of the day, and thought we did a great job doing so,” Neill said. “The learning experience was the communication piece inside the storm shelter. Wireless can happen if we manipulate it in a different way, a landline or computer drop can also work.”

Board President Sid McNeal said he enjoyed the discussion about terminology amongst the school system and public safety.

“It’s funny, you talk through things a few times and then decide it’s better to just keep it simple,” McNeal said. “We’ve asked the public safety leadership to have the right to call for a lockdown at any of our schools at anytime, and then we’ll have the discretion within the system of how we carry out that lockdown.”

McNeal said the carrying out of the lockdown will depend on the school and the severity of the situation.