LATEST NEWS
Home Opinion When is the best time for hunters to harvest does in Alabama? 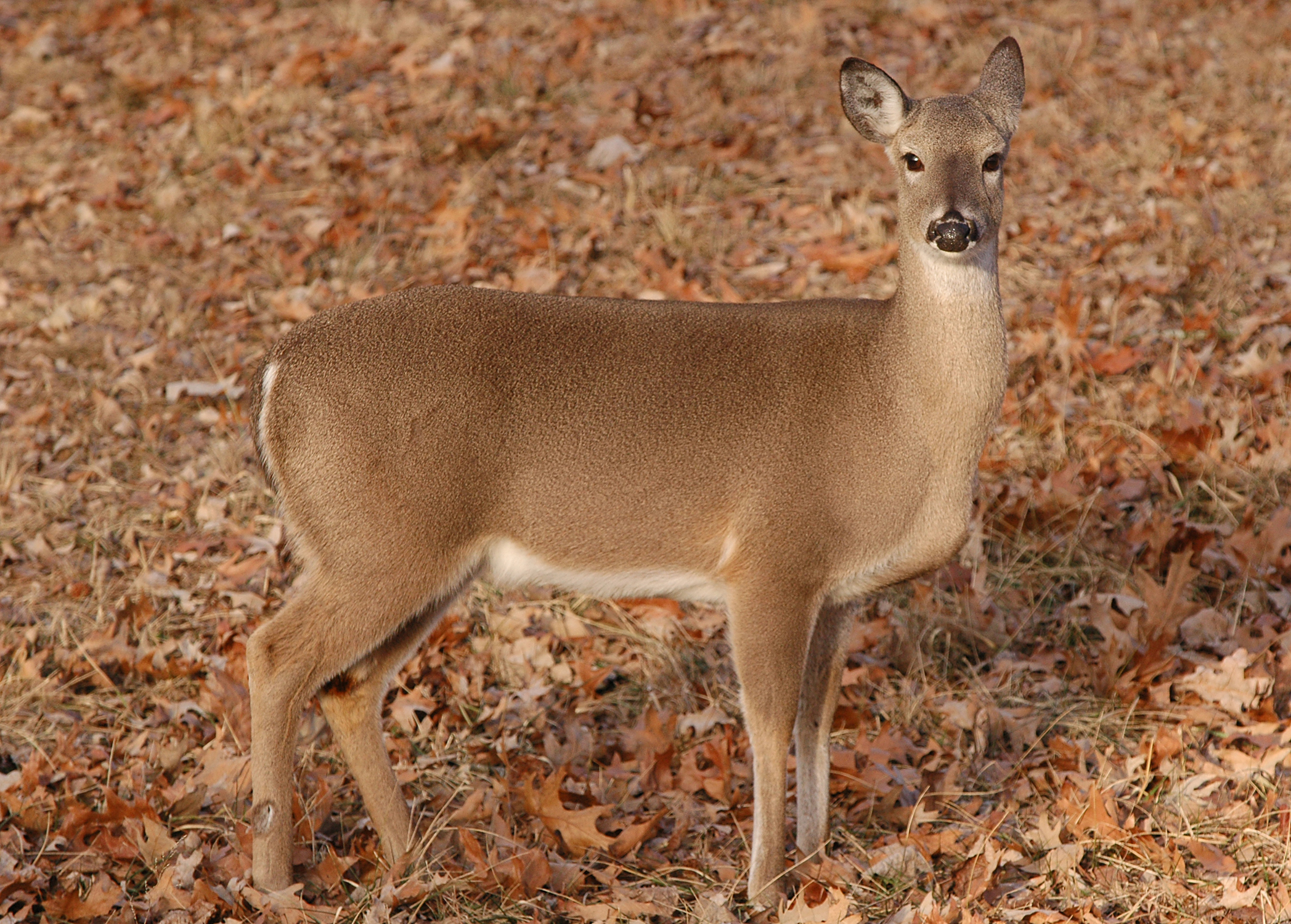 When is the best time for hunters to harvest does in Alabama?

When is the best time for hunters to harvest does in Alabama? According to Alabama Wildlife and Freshwater Fisheries Director Chuck Sykes, the answer is simple: When you have the opportunity.

“I am now a weekend warrior,” Sykes said. “I shoot them when I can. If I need to kill so many does, I have to do it when I can. In a perfect world, it would be better to get it done early. Don’t wait. Get it done, and then concentrate on your buck hunting. That accomplishes a couple of things. It leaves more food for the deer that are left, and bucks have to work a little harder to find a doe during the rut. That means more buck movement, which is good for hunters.”

Alabama hunters have progressed from the philosophy that a doe should never be shot under any circumstances to aggressively thinning the deer herd by taking out does and are now back to a more balanced approach to herd management.

“I’ve got personal experience on one 250-acre tract of land in Choctaw County for the past 40 years,” Sykes said. “We were planting food plots before it was fashionable to plant food plots. I’ve got one four-acre field that has been hunted since probably 1975. The first year we hunted it, if you saw one deer every couple of weeks, that was good. By the time the late 80s and early 90s got here, if I didn’t see 25 to 30 a day, I was upset. Both of those were unhealthy. The first one was there weren’t enough deer. The second one, it had been taken to the extreme and there were too many deer. Both of them were unhealthy situations. Now I can go sit on that food plot and I’ll see eight or 10 deer. That’s what the habitat can support. The deer are healthy.

“We went from a time when it was forbidden to shoot a doe to where we shot everything that was there. We went from one extreme to the other. Now you have to balance it, because there are a lot more people hunting now. There are a lot more predators out there. You just can’t have the blanket policy of kill all the does you can and it’s not going to hurt anything. Those times have passed for most properties. There are still some areas where the deer are overcrowded, but for most areas, it’s not the case.”

Sykes understands why it was forbidden to shoot does back in the middle of the 20th century when deer populations in the state were struggling to remain viable.

“Back then, if you shot the does, you weren’t going to have any babies,” he said. “It went back to the fact that the more females you had in the herd, the more little ones you could have to get the population up. It was beaten into our heads that you don’t shoot a doe: ‘That’s the future of your deer herd.’

“Well, everything has to be held in moderation instead of one extreme or the other. When you have too many, you’ll sit on a food plot and see one little spike and 25 does. Traditional wisdom told you to shoot the spike. It was legal. You could kill a buck a day, and that’s what a lot of people did. The buck-to-doe ratio was skewed terribly toward does and the herd was unhealthy. Now we’re getting back to where it needs to be.”

Alabama went to a statewide three-buck limit in 2007, with the exception of Barbour County, and the results have been noticeable. Hunters can take three bucks per season, one of which must have at least four points an inch in length on one side. All antlered bucks taken in Barbour County must have a minimum of three points on one side, except during the statewide special youth deer hunting dates when any antlered buck can be taken.

“With the three-buck limit, you’ve got more bucks making it into the older age classes,” Sykes said. “People have shot does to get the numbers down. Now it’s a maintenance thing. Instead of a blanket statement of don’t shoot any or shoot all of them, now you’ve got to do more fine-tuning on your management program.” 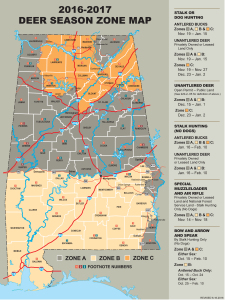 There are not definitive rules regarding the best time to take does out of the deer herd. If time in the deer stand is limited, WFF Director Chuck Sykes recommends taking does when the opportunity is available.

Wildlife and Freshwater Fisheries (WFF) assists landowners with deer management decisions through its Deer Management Assistance Program (DMAP). Through the program, landowners and leaseholders can ask for assistance in management strategies to reach the specific goal for a particular parcel of land, whether the goal is to have more deer or more quality deer. WFF biologists will survey the property, review deer harvest data collected from the property and then determine what the hunters on that land should do in terms of strategies like doe harvest and antlered buck restrictions.

For those who are not on the DMAP or some other management program, Sykes said it’s difficult to determine which strategy would be best, but he does offer some guidance for those who are managing without assistance.

“Without having a biologist visit the property to do a habitat assessment, set up game cameras to determine deer densities and review deer harvest data collected from the property, it’s tough,” he said. “A good rule of thumb that I have used over the years is if your club shoots five bucks, you should probably shoot between 15 and 20 does. The optimal buck-to-doe ratio is one-to-one, but that’s basically unrealistic in a natural setting. If it’s three-to-one or four-to-one, you’re probably in pretty good shape.

“And it goes back to your objectives. If you’ve got 100 acres, you can only expect to kill a few deer. If you’ve got 10,000 acres in a club, that’s a little bit different. But you need to have realistic expectations of what you want to accomplish. Do you want to go see a bunch of deer? Or does it not matter that you hardly see any deer, but the one you see is a big one? Then your harvest strategy changes drastically, so it’s hard to give a blanket recommendation on doe harvest.”

WFF asked the Conservation Advisory Board to scale back the antlerless harvest in a portion of north Alabama for the 2016-2017 season.

“Basically, in much of that area, you have a lot of agricultural land with little wood lots, like you do in the Midwest,” Sykes said. “The area also has much smaller hunting tracts on average when compared to other parts of Alabama. For most of the region, either the habitat is just not there to support the numbers of deer you do in Choctaw County in a pine thicket, or management activities on adjoining properties have much more impact due to the smaller average tract size. Property managers up there requested a reduction in antlerless deer harvest because they felt like the numbers were too low. Our biologists looked at it and agreed that it would be a good idea to try it.”

Judging from what I’ve been seeing on social media, Alabama is enjoying another banner year in terms of harvesting bucks with impressive antlers even with the drought conditions of the fall.

“Fortunately, the antler growth was already done by the time we were in the drought,” Sykes said. “We had good rains in the spring and most of the summer. During the antler-growing period, the deer were in good shape. The drought didn’t hit until late August, so the antlers were done.

“Another thing about the drought is the acorn crop. Because of the early rains, we had a good acorn crop. And with the drought, I’ve never seen the metering of acorns like this fall. The trees would drop a few, then a few more. They didn’t drop all at one time, so the deer had quite a bit to eat. I don’t know why that happens. I just noticed it this year. I planted my food plots a week ago, and there was a swamp chestnut oak still dropping acorns. Usually, they’re done dropping by the first week of November.”