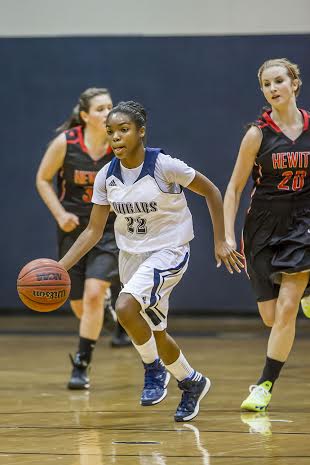 Raven Omar is shown in a game last year. Clay-Chalkville knocked off Hewitt-Trussville on Friday night.

By Kyle Parmley, For the Tribune

Clay-Chalkville and Pinson Valley began play in the Spain Park Lady Jag Christmas Tournament on Wednesday morning, in the first day of the tournament that runs through Friday.

Pinson Valley began the day with a 57-21 loss to Mountain Brook. The Indians scored the first five points of the contest, and the game was tied at 5-5 after a sleepy first quarter. A 23-5 second quarter in favor of the Lady Spartans allowed Mountain Brook to pull away and maintain control the rest of the way.

Clay-Chalkville followed with a 48-47 win over Cullman that was tight the whole way. Cullman had the ball in the final seconds but was unable to get a clean shot off.

The Lady Cougars scored five consecutive points early in the final quarter to take a 40-39 edge. The teams went back and forth a few more times before Clay sealed the game with an Amiya Payne layup and Raven Omar drained a pair of free throws.

Omar scored all 14 of her points in the second half, as Mekaila Hill (six first-half points) and Alex Johnson (four of her six) buoyed the Lady Cougars in the opening two frames. Payne scored six of her nine in the second half.

Both teams pick up tournament play again on Thursday. Pinson Valley faces Cullman at 10:30 a.m., while Clay-Chalkville plays Mountain Brook in the quarterfinals at 4:30 p.m.