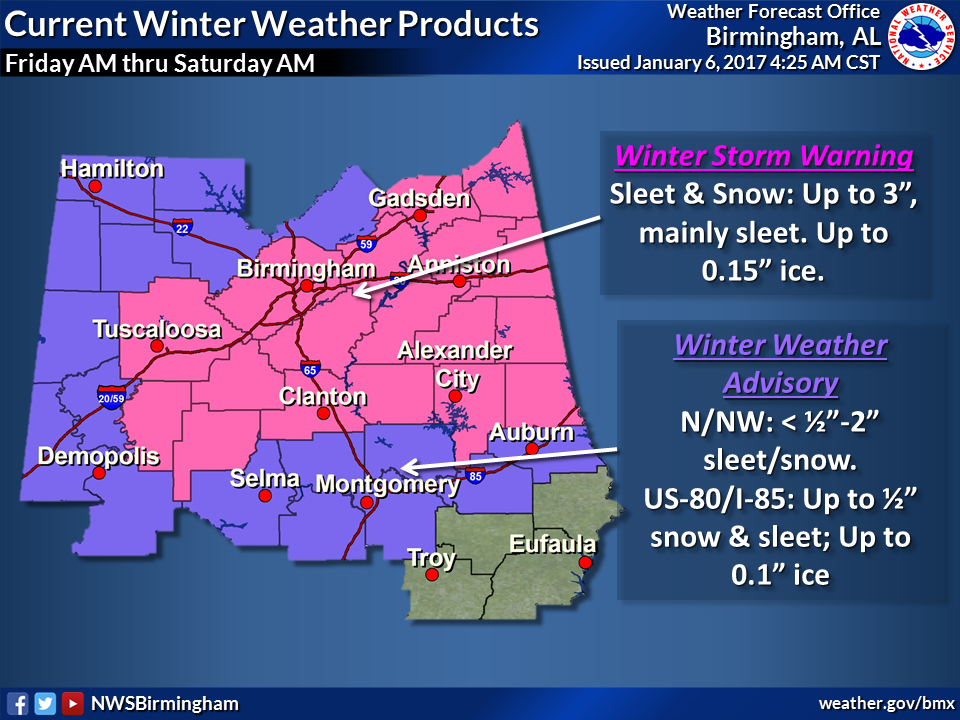 TRUSSVILLE –9 p.m. –Per Trussville Police- Roper Tunnel Road is completely impassable and has been closed.

According to Jerry Tracey, Jefferson county reports all bridges and overpasses are closed. Urging all to stay off the roads.

Temperatures will drop into the teens and twenties overnight, freezing any standing water. Driving is discouraged.

UPDATE Friday 6:30 p.m. –Snow is beginning to fall in the Trussville are. With heavy precipitation bands to the west, accumulations are expected.

AlabamaWX reported heavy sleet is now making its way into Jefferson County and into the Birmingham Metropolitan Area. Travel conditions could start to deteriorate quickly as it starts.

According to NWS in Birmingham, travel conditions deteriorating rapidly along I-20 between MS state line & Birmingham metro area. Icy patches already being reported. Travel is not advised!

Mostly snow now in parts of Tuscaloosa. Snow mixing in with the sleet on north side of Birmingham.

The Jefferson County Emergency Management Agency reported numerous crashes on the Interstate and urged everyone to stay off the roads this evening and overnight; frozen precipitation is moving in and temperatures will drop.

UPDATE Friday 1 p.m. –According to AlabamaWX.com, rain, freezing rain, and sleet is falling generally along and south of I-20, with only light snow flurries to the north, where a Winter Weather Advisory is in effect. A nose of warm air aloft, about 5,000 feet off the ground, is keeping much of the precipitation liquid for now.

That warm air aloft will erode tonight as cold air deepens, and precipitation will turn to all snow and sleet this evening. Heaviest accumulation will be in the Winter Storm Warning area.

We do not recommend travel across North or Central Alabama this afternoon and tonight. Road continues will only deteriorate. While the snow and sleet will end during the pre-dawn hours tomorrow, temperatures will remain below freezing through the day, so hazardous driving conditions will continue at least through the morning hours. Possibly through the entire day where the heavier precipitation falls.

In the heavier precipitation bands tonight, some scattered outages are possible, but widespread powe outages are not expected.

UPDATE Friday 8 a.m. –The National Weather Service in Birmingham has issued a winter storm warning for Jefferson and St. Clair counties until 9 a.m. on Saturday. This includes areas such as Birmingham, Tuscaloosa and Gadsden. The precipitation is also expected to reach the local area in the form of sleet and freezing rain earlier than previously expected.

Governor Robert Bentley has declared a state of emergency for all 67 counties across Alabama. 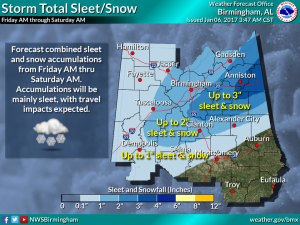 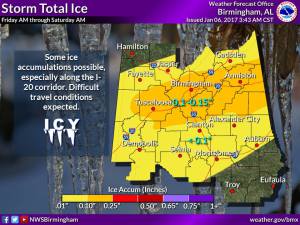 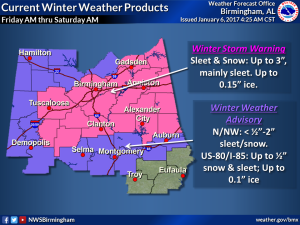 Many other areas (shaded in blue) are under Winter Weather Advisories. Scattered precipitation has already started with temperatures near freezing.

Sleet and freezing rain will affect areas along the I-20/I-59 corridors, including Birmingham and Tuscaloosa, as early as this morning. We will see several waves of wintry precipitation today and tonight.

The wintry mix will shift southeastward through the afternoon and tonight, with some locations changing over to snow later this afternoon. The main impacts are expected to be due to sleet and freezing rain resulting in icy travel conditions as temperatures fall into the 20s.

Up to 2 to 3 inches of sleet/snow combined are possible with ice accumulations up to 0.15″. Avoid traveling today if possible.

Friday forecast –Rain, freezing rain and sleet likely, possibly mixed with snow before noon, then freezing rain and sleet likely between noon and 3 p.m., then sleet likely, possibly mixed with snow after 3 p.m.. Cloudy, with a high near 33. North wind around 10 mph. Chance of precipitation is 70percent. Total daytime ice accumulation of around a 0.1 of an inch possible. Total daytime snow and sleet accumulation of less than a half inch possible.

Friday night forecast –Sleet likely, possibly mixed with snow, becoming all snow after 9pm, then gradually ending. Cloudy, then gradually becoming partly cloudy, with a low around 19. North wind 10 to 15 mph. Chance of precipitation is 70 percent. New snow and sleet accumulation of around an inch possible.

TRUSSVILLE –The latest information from the National Weather Service in Birmingham includes winter weather advisories and winter storm warnings for most of Alabama.

Governor Robert Bentley has declared a state of emergency for all 67 counties across Alabama.

According to the NWS, winter weather will produce accumulating snow and freezing rain along a corridor north of Interstate 20. The time frame remains 6 a.m. on Friday until 9 a.m. on Saturday.

In the local area, accumulations of ice and snow could range from half an inch to 2 inches in an area including Tuscaloosa, through parts of metro Birmingham to Gadsden and areas north.

Driving may become hazardous as roads and bridges could freeze over and become slick and difficult to maneuver. Periods of snow could also produce periods of limited visibility.  Caution should be used if you have to drive.