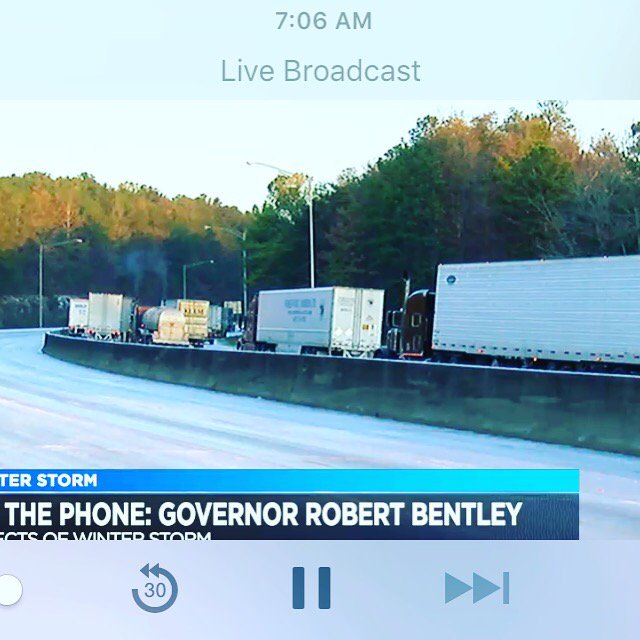 BIRMINGHAM –UPDATE 4:45 p.m. –I-20 is still experiencing significant travel issues in both directions between the 142 mile marker and I-459 in Jefferson County. I-20 eastbound is closed, and westbound is moving very slow. Please asks motorists to avoid the area. – Senior Trooper Johnathan Appling

In Trussville, road crews worked throughout the night to put sand on major thoroughfares, but motorists are still experiencing problems with icing on hills. Sand trucks were not able to get up the hills in areas such as Camp Coleman Road and in parts of Carrington due to the ice.

Roper Tunnel Road was closed on Friday night. Despite sand being placed on the roadway, motorists are still having difficulty making it up or down the hill.

Tim Shotts of Trussville Fire and Rescue said most of the main roads were passable with caution.

“You can drive on most of the main streets, but there are some slick spots,” Shotts said. “We certainly don’t advise driving if you can avoid, though.”

A truck has jack knifed in I-459 at the Trussville exit, according to Don Baker of Center Point Fire and Rescue.

According to multiple reports, Old Springville Road and Chalkville Mountain Road in Clay and Grayson Valley are impassable.

Troopers are working numerous crashes on I-20 in Jefferson, St. Clair, Talledega, Calhoun and Cleburne. Motorist should avoid I-20.

Interstate 459 is iced over and closed to traffic. The Summit shopping center is closed Saturday, but stores will reopen on Sunday.

Meteorologist James Spann said not to expect much relief before noon on Saturday as temperatures struggle to rise above freezing.

Ice has vehicles stranded on Interstates throughout central Alabama and ALDOT crews are scrambling to treat roadways to get motorists on their way.

Here’s why should stay off the roads this morning. 18 wheelers are stuck on ice on I-65 in Birmingham. pic.twitter.com/OZULudMHkg

In Jefferson County, 18-wheelers are reportedly stranded on I-65 with one truck blocking all northbound lanes at the Green Springs exit.

Governor Robert Bentley reports serious problems on I-20 from Jefferson County to the Georgia state line.

According to ALEA, all lanes of Interstate 59 in Tuscaloosa County are impassible. Motorists are encouraged to stay off the roadway.