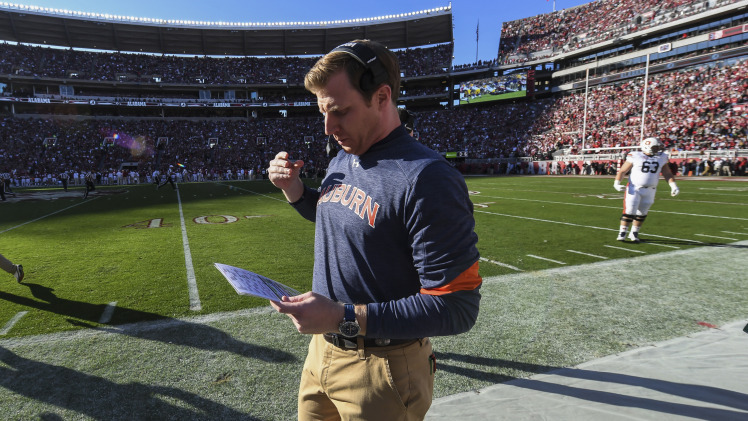 AUBURN, Ala. – After four seasons as Auburn’s offensive coordinator, Rhett Lashlee is leaving the Plains to become the play-caller at the University of Connecticut.

Lashlee, a Broyles Award finalist in 2013 as one of the nation’s top assistant coaches, coordinated some of the most explosive offenses in Auburn history. In 2016, the Tigers averaged 31.2 points per game.

“It’s probably one of the hardest decisions I’ve made, definitely in my professional career,” Lashlee said. “Auburn’s very dear to us. I’ve spent a total of six years here, two different times. All four of our kids were born here. We just love everything about Auburn. The Auburn family is always going to be very dear to us and a part of us.

“I’m obviously very close with Coach Malzahn. Our relationship will always be good. He’s been very supportive. I’m very appreciative to him for the opportunity he gave me at Auburn.”

“Our offenses have achieved great success and he has been a big part of that. This is a great opportunity for Rhett to implement and run his own offense,” Malzahn said. “I’ve known Rhett for two decades and he’s a man of great character and integrity and this is another step towards his goal to become a head coach.”

Auburn’s 2013-14 seasons were the best back-to-back offensively in school history.

Lashlee, a record-setting high school quarterback for Malzahn at Shiloh Christian in Springdale, Ark., first came to Auburn as a graduate assistant in 2009, contributing to Auburn’s SEC and national championships in 2010.

“I want to thank Rhett for all of his contributions and his friendship. I want to wish he and his wife Lauren all the best in this new endeavor,” Malzahn said.

“I look back on the things we accomplished at Auburn,” Lashlee said. “I’m really happy that we were able to win two SEC championships and play for two national titles. We did a lot of good things.

“Didn’t end the season the way we wanted, but I think things are set up as good as they can be moving forward. I feel really good about the staff, and really just the offensive personnel that’s in place going into next year. I think it’s set up for Auburn to have a big year.”

Jeff Shearer is a Senior Writer at AuburnTigers.com.