JEFFERSON COUNTY — Jefferson County Schools Superintendent Craig Pouncey announced at a press conference Wednesday that five schools in the system were labeled as ‘ failing’ by standards set forth in the Alabama Accountability Act. The Alabama Accountability Act is legislation passed in 2013 and amended in 2015 to identify schools around the state with sub-par test scores.

Pinson Valley and Center Point High Schools were among the five schools mentioned in the press conference, along with McAdory, Minor and Pleasant Grove.

Pouncey said the high schools were labeled based on results from last spring’s tenth grade ACT Aspire tests. This was, in fact, the first year the test was administered and according to Pouncey, results across the entire state were low.

In tenth grade, state math averages for the ACT Aspire dropped from 20 percent in both 2014 and 2015 to 18 percent this year. Reading scores, which rose from 21 percent to 24 in last year, lost one percentage point in 2016.

Center Point Principal Van Phillips told reporters during the conference that his school had an 89 percent graduation rate with only a four percent drop out rate, and he felt his school was not failing at all.

The Alabama Accountability Act was originally passed in 2013 with the stipulation that a school would be labeled as ‘failing’ if it were in the bottom six percent statewide for test scores in reading and math. In 2015, the legislation was amended to include only one year’s results.

On the test, only one percent of 10th grade students at Center Point High School scored what is considered ‘proficient’ on the test in math. Only seven percent of students scored proficient in reading at the high school. 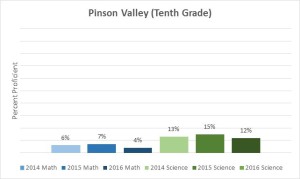 A chart showing the percentage of students which scored ‘proficient’ at Pinson Valley in both math and science on the ACT Aspire test.