Hitchcock and Maddox building on the site of the old Dairy Cone.

TRUSSVILLE — The Trussville Downtown Redevelopment Authority (TRA) recently awarded two grants to downtown business owners to improve the visual of their buildings. A total of three buildings will be renovated to improve the outside look.

Hitchcock and Maddox building on the site of the old Dairy Cone.

One of the grants will cover two buildings. Those buildings are Gunter Oil and the building that houses the Trussville Tribune among other businesses. The other grant was awarded to Richard Hitchcock, of Hitchcock Maddox Financial Partners, to not only improve the existing structure, but to build out to the sidewalk area.

Seeing an improvement in these downtown buildings is something the TRA and the city of Trussville have long awaited.

“My whole thought process on this when I was an original member of the TRA was we had to get something done,” said Mike Gunter, owner of the Gunter Oil and Trussville Tribune buildings. “People had to see things being done to get the excitement going for some of the other developers in town. As a multiple business owner in Trussville, I wanted to put my money where my mouth is and be the first one to do it. I hope this will help spur the other business owners to get on board with this.”

Hitchcock said he was just as excited to get started on his project, and has already spoken with a builder to prepare to break ground soon.

“We are in the process of bringing the facade closer to the street, and put the parking in the back. The goal is to have a nice sidewalk with landscaping as you go back down towards Chalkville Mountain Road,” Hitchcock said. “We’re trying to do our part that when we work on our building that it will be conducive to other people taking a chance on Trussville.”

Trussville Mayor Buddy Choat was very pleased to see progress being made so quickly.

“The whole idea was to get everybody to buy into the new look downtown,” Choat said. “There’s already been some other businesses now who are interested. We think this will definitely encourage other business owners to do the same.”

Gunter said the improvements to his building would be substantial to the aesthetic of downtown. 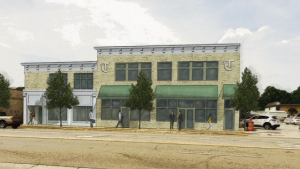 “We’re going to completely redo the outside. We plan to paint the facade out front, put some columns on the corners of the buildings. We plan to do some dimpled molding across the top to mimic the time the building was built,” he said. “We will add awnings over the Tribune building and window molding around our building.

“It will be completely around all four sides of the buildings. It will look as good at the back as it does the front. It’s going to really enhance the building a tremendous amount.”

Gunter said the project would likely take a few months, but had a target finishing date around mid-spring.

Hitchcock, who is renovating and building on to the old Dairy Cone restaurant, said he hoped this project would enhance the area and encourage others to do the same.

“Mike Gunter is ready to upgrade his building and we are too, so hopefully between us, it will start to come together,” he said. “Overall, when you start putting all the pieces together, it’s certainly going to look like a different Trussville.”