The National Federation of State High School Associations has named Hewitt-Trussville baseball coach Jeff Mauldin both the Alabama Coach of the Year and the South Sectional Coach of the Year for 2016 after leading the Huskies to their first state baseball championship in March. 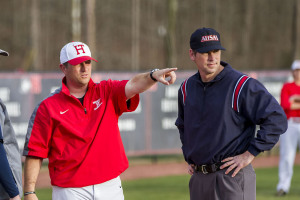 “It’s pretty humbling,” Mauldin said. “The letter came in the mail and funny thing, I get letters from the NFHS all the time — usually it’s selling stuff, or some product or video — and I almost threw it away. But I put  it in my bag and took it home. Opened up my bag and pulled it out, would’ve thrown it away but there wasn’t a trash can nearby, so I opened it up and just said, “‘Holy Cow!'”

He said looking at the state that the Southern Section comprises he started to realize how big of an honor it was.

He told his coaches that word might leak out, so he wanted them to hear it from him first.

“Without the coaches — and Jeff Schrupp and Guy Howard have been with me at Hewitt-Trussville from Day 1 — I said ‘None of this is possible without you guys. The state championship, any awards … and of course, the players.”

He said one of the most meaningful messages he got was from the father of Keegan Morgan. “He said ‘I just want to thank you. Please take the time to reflect on all the players and coaches and the impact you’ve made on their lives. … you have no idea how much we love you.'”

“And that really got to me, because that’s what it’s all about, impacting the kids. Wins and losses happen, and awards are nice, but having the chance to make a difference in a young man’s life is the ultimate reward.”