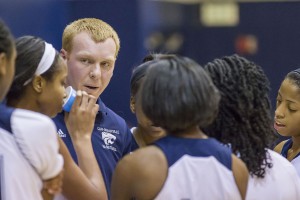 CLAY — The past two seasons, Clay-Chalkville’s Lady Cougars have wound up in a tie for the area championship.

“We’ve had to flip a coin the past two years,” Lady Cougars coach Justin Haynie said. “Not my favorite thing to do.”

Seventh-ranked Clay-Chalkville removed any random factor from determining the Class 6A, Area 12 champion Friday night, knocking off Pinson Valley 64-42 and wrapping up the title with an area game yet to play. The Lady Cougars (19-5, 5-0) close out the area slate with a game at Gardendale on Tuesday.

Despite the lop-sided win, it wasn’t all pretty for the Lady Cougars. Fiesty Pinson Valley took the fight to them early and the Lady Cougars looked rushed offensively to put the Lady Indians away. An Aaliyah May 3-pointer cut the Clay lead to 10-6 before some good offensive board work and a fastbreak basket by Raven Omar pushed the lead to 14-6 at the quarter break.

The Lady Cougars settled down in the second period and put the game away. Center Alex Johnson scored 10 of her game-high 21 points in the period on a variety of putbacks, turnarounds and point guard Omar added six points as the Lady Cougars outscored Pinson Valley 24-10 in the quarter for a 38-16 lead.

The Lady Cougars kept their margin above 20 for the most part, even as Haynie subbed liberally to rest his starters. Clay led 54-30 after three and withstood a 12-10 fourth-period burst by Pinson for the 22-point win.

Amiya Payne followed Johnson’s 21 with 12 as the only other double-figure scorer. Nine Lady Cougars scored.

For Pinson Valley, four players scored six points apiece: May, Kaylin Hamby, Kaitlyn Ambrose and Barryonna White for the Lady Indians, who are showing much improvement from the start of the season.

After the trip to Gardendale, Clay travels to McAdory for a Friday game and closed out the regular season with a home game against Shades Valley on Tuesday, Jan. 31, and a road game at Mountain Brook on Friday, Feb. 3.

The Area 12 tournament will be the next week at Clay