By Bethany Adams
For The Tribune 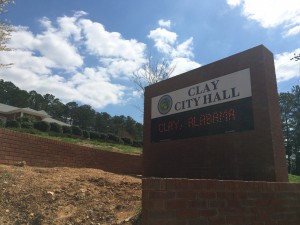 “[T]he City Council and the Mayor of the City of Clay wish to extend its heartiest welcome to its newest citizens of faith,” the Proclamation stated.

“We are so glad to be in Clay Al,” Pastor Ronald Wilder said. “We look forward to working with you; we are here to make a difference.”

Later during the meeting, Mayor Charles Webster motioned to approve Peggy Baxter to fill the open position on the Library Board. Baxter worked at the Clay Public Library for three years and currently volunteers with the library’s children’s program. The council voted unanimously to approve Baxter for the position.

Lisa Jenkins, the recipient of one of the city’s school grants for November, thanked the council. Jenkins, who teaches at Clay Elementary School, used the grant to purchase much-needed supplies for her class. “I was just very thankful to receive the grant to get some of the things for the classroom that we needed,” Jenkins said. “We’re excited about it; the kids are really excited to have it, and we really appreciate it.”

In light of the anniversary of the 2012 tornadoes, Councilor Dennis Locke urged community members to prepare themselves by purchasing weather radios “whether you can hear the sirens or not”, and being ready to go to a safe place. He also extended thanks to community members who assisted his family after the tornadoes in 2012.

“I live in a community that’s filled with compassionate people who will go far beyond any expectations to take care of those in need,” Locke said.

Webster also mentioned that the city has begun work on updating the facilities at the high school, including a new stone facade and painting.  “Things are really changing and looking really nice, and that’s just a work in progress,” he said.

The council later voted unanimously on a resolution releasing a lien at 5278 Balboa Avenue.

During the public comments portion, former council member Kevin Small suggested that, since the city is still waiting for the new deputies, the council should consider purchasing more mobile camera units.

“We’ll probably end up putting up some cameras in certain areas that are permanently-mounted,” Webster said.

The next Clay City Council meeting will be held Tuesday, February 14 at 6:30 p.m., with pre-council at 6.