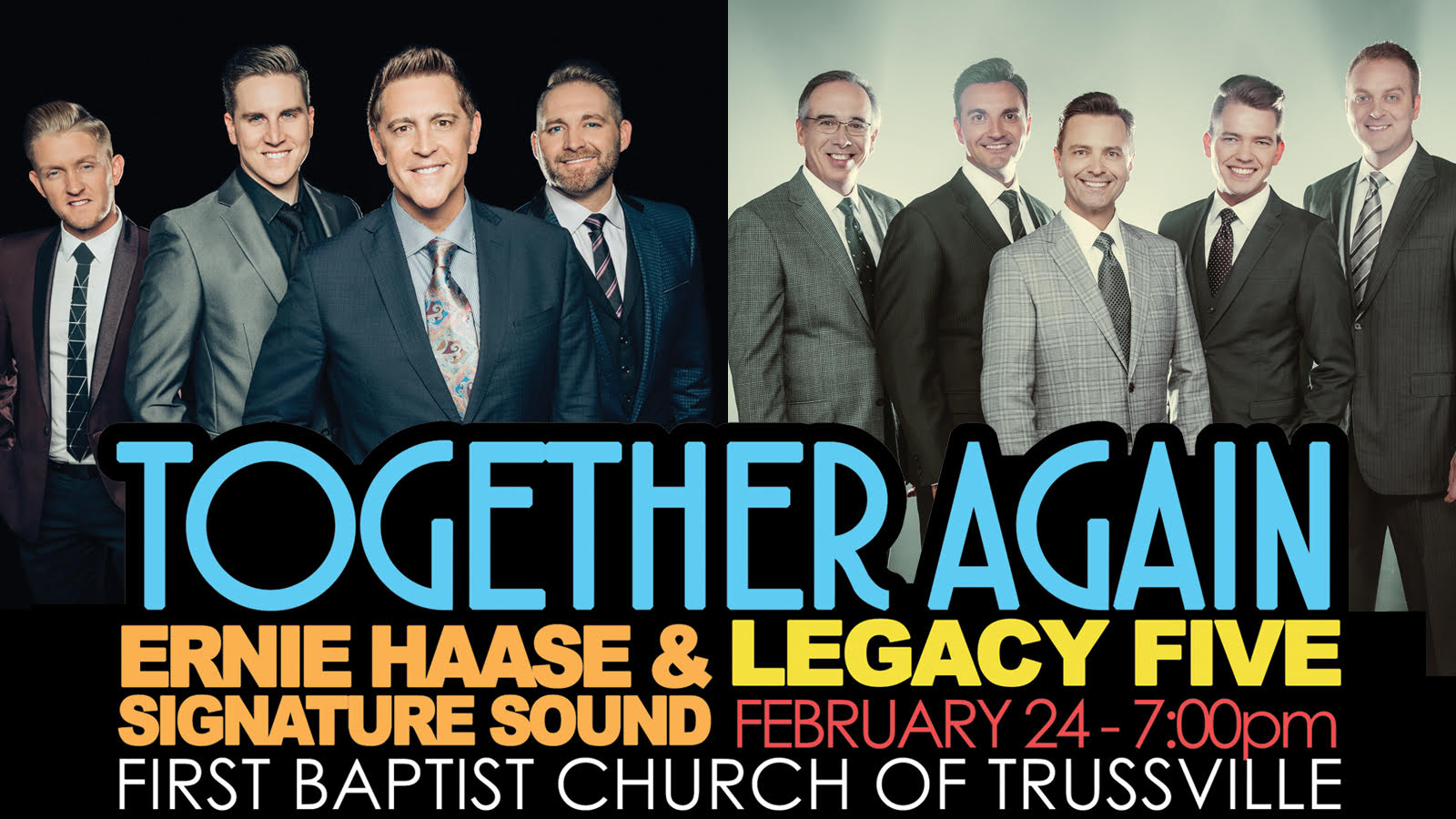 Legendary gospel groups coming together for concert in Trussville 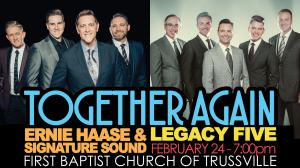 Ernie Haas and Signature Sound will be joined by Legacy Five, two groups formed by founding members of southern gospel icons The Cathedrals. This rare combination will be seen together on stage for one night only in Trussville.

Each of the quartets will sing their hit songs separately, but will also come together again and perform hit songs from their time with The Cathedrals.

From its formation in 2003, Ernie Haase has built the GRAMMY-nominated and GMA Dove Award-winning group Signature Sound into one of the most popular and beloved quartets in all of Southern Gospel music. The group has traveled all over the world, offering energy, excitement and encouragement through its powerful brand of gospel music. EHSS continues to gain fans all around the globe with its unique performances and unmistakable four-part harmonies. EHSS is one of the most celebrated quartets in Southern Gospel History mentioned with the same “trailblazing” reverence as groups likes The Statesmen Quartet and The Cathedral Quartet.

The group has sung and sold to millions worldwide, a feat that has not been accomplished by any other Southern Gospel quartet. From concerts in Latvia and India to South Africa and New Zealand, events all around North America, TV appearances on ESPN with NASCAR, multiple NBA appearances singing our National Anthem, and even a specialty tour of historic American theaters in support of the EHSS Broadway project featuring Les Misérables legend J. Mark McVey, Signature Sound is a world-renowned quartet that spans a wide variety of genres and cultures.

As group founder, Haase is a creative, hard-working tenor whose early roots with the unforgettable and legendary Southern Gospel quartet, The Cathedrals, helped begin his dream to form a powerhouse group of his own. Along with many appearances through the years on the widely regarded Gaither Homecoming Tour, his goal was soon accomplished and then some…as EHSS quickly gained an international platform in gospel music.

When the Legendary Cathedral Quartet retired in December of 1999, Scott Fowler and Roger Bennett decided to continue the rich musical tradition of Southern Gospel Quartet singing. Legacy Five was organized and had their official debut in January 2000 in Atlanta, Georgia. Since that day, they have made a major mark on the Southern Gospel Music world. Immediately audiences responded overwhelmingly to their four-part harmony and their ability to effectively communicate the message of Christ. Since the quartet’s formation, they have established and maintained a firm place at the top of Christian music.

Legacy Five has enjoyed more success in their short career than many groups experience in decades. In their first ten years, The Singing News Magazine, Southern Gospel music’s leading fan and trade publication, has nominated Legacy Five for some 75 Singing News fan awards. Year after year they are recognized as one of Gospel music’s favorite southern gospel groups. The Southern Gospel Music Association honored Legacy Five with Recording of the year and they have had 2 Dove Award nominations.

Legacy Five has been featured on numerous video tapings of the Gaither and friends Homecoming Video series, which has sold multiple millions of copies worldwide. They have also appeared on In Touch, with Dr. Charles Stanley, as well as In Touch Ministries’ sponsored cruises. Legacy Five is also regulars at Dr. David Jeremiah’s Shadow Mountain Community Church in El Cajon, California. Viewers across America have seen Legacy Five on TNN, TBN, Sky Angel, INSP, GMT, The Odyssey Network and a host of local channels.

The rich four and five part harmony that Legacy Five has become noted for are the result of a masterful weaving together of five unique and versatile talents. Matt Fouch sings the bass, Scott Howard sings the baritone, Scott Fowler sings the Lead, Josh Feemster sings the tenor and Trey Ivey is the group’s pianist

Some 130 times a year, Legacy Five presents Gospel music in a way that has endeared them to audiences all across the United States and Canada.