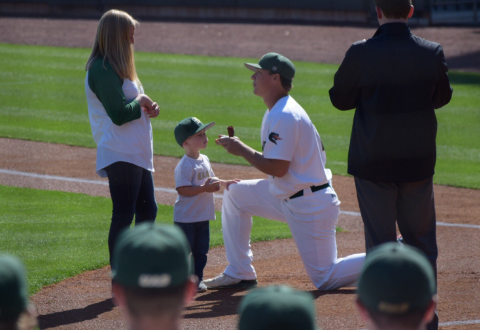 By Ron Hagood
For The Tribune

On Sunday afternoon the UAB Blazers completed a three game sweep of the Creighton Bluejays. UAB scored 11 runs off Creighton fielding errors in the game. 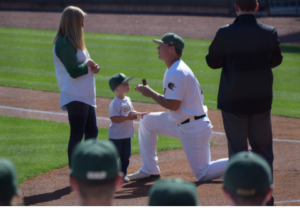 It was Clay-Chalkville’s own Matthew Calvert who hit a home run when he proposed to his then-girlfriend Amanda Love during the ceremonial first pitch. She said yes.

The Blazers scored first in the third inning, when Bluejay’s starting pitcher Jeff Albrecht made an errant throw to first base, allowing three runs to score. Then, as if one bases loaded error wasn’t bad enough, in the bottom of the sixth, Creighton’s Thomas Luevano overthrew the ball into right field trying to turn a double-play, allowing three more runs to score.

All the fielding miscues, overshadowed a solid pitching performance from UAB starter Tanner Graham. Graham struck out nine Bluejays over six innings of work. For UAB this is their third season opening sweep in the last four seasons. Before the game, the fans got to witness

For the rest of the Tribune area Blazers, Carter Pharis was 0-5 with two RBI’s and a run scored. Thomas Johns’ was 1-3 with a run scored. Tyler Tolbert was 0-1 with a pair of sacrifice bunts. The Blazers will return to action Tuesday evening at 4 p.m. against Alabama State.

The Bulldogs from Birmingham got the scoring started in the third inning. Kevin Williams Jr. crushed a 3-2 pitch over the left field wall, giving Samford a 1-0 lead. Two innings later Ayrton Schafer would hit his first home run as a Samford Bulldog giving the home team a 2-0 lead.

The home standing Bulldogs would add two more runs in the bottom of the sixth inning to make it 4-0. UNC-Asheville would load the bases on Samford deliver Connor Radcliff, but an infield fly, a  fielder’s choice and strike out would limit the visiting Bulldogs to just one run. Pinson Valley graduate Wyatt Burns closed the game out for Samford, picking up his first save of the young season.

For an opening day start you cannot ask for more than what Garrett Whitlock gave UAB on Friday. Whitlock pitched eight innings of shutout baseball allowing five hits while striking out six. Stephen Dobbs started the scoring for the Blazers in the second inning when he hit a line drive to right-centerfield scoring Antonio Ralat giving UAB a 1-0 lead. In the bottom of the fifth, the Blazers would put the finishing touches on Creighton starter Rollie Lacy.

A one out single from Brewer Hicklan made it a 2-0 game. Hicklan would score two batters later on wild pitch.

Despite taking the lose for the Bluejays, Lacy was effective at times. He stuck out six Blazer hitters over his five innings. In the bottom of the ninth, Creighton would make it a game. Jason Allbery would hit a blast over the left field wall, cutting the UAB lead to 3-2.

Blazers closer Thomas Lowery would make sure that was all for the Bluejays. A strikeout and hard hit line drive would end the game.

Local products, Carter Pharis, Thomas Johns and Tyler Tolbert were not at their best at the plate in this game, but defensively played outstanding. Tolbert was a part of two huge double plays, that would quiet down any chance of a Bluejays big inning.