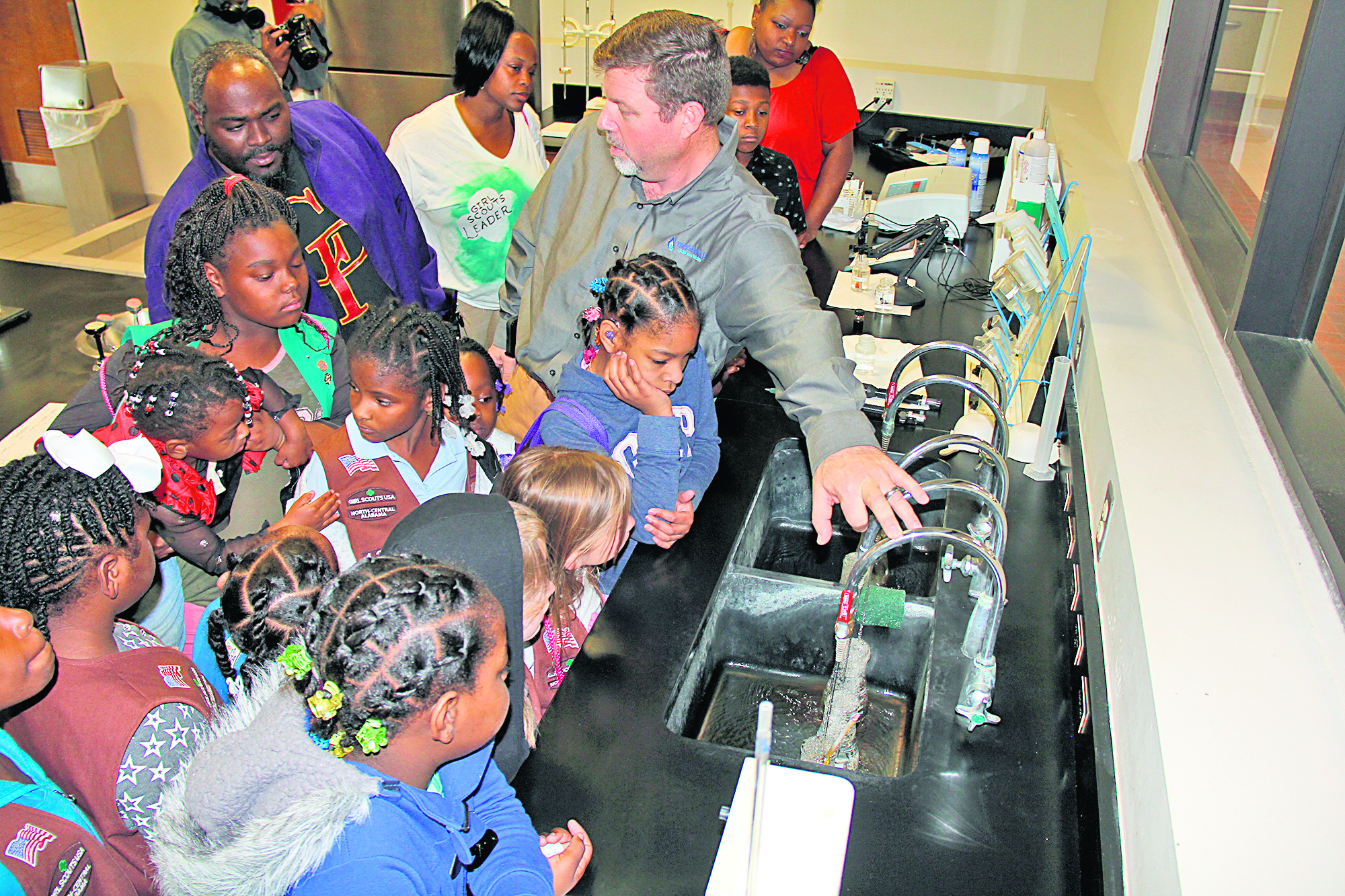 Trussville Gas & Water's Alan Long shows local girl scouts the difference in the water as it goes through each process in the plant. Photo by Chris Yow

TRUSSVILLE — How does water get to the tap? That’s what Girl Scout Troop 133, based in Pinson, wanted to find out Monday morning. 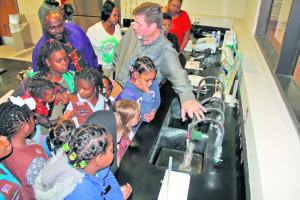 Trussville Gas & Water’s Alan Long shows local girl scouts the difference in the water as it goes through each process in the plant. Photo by Chris Yow

Trussville’s water has won awards for its purity, and that’s something upon which supervisor Alan Long prides himself. His face lights up when talking about the process the water provided by the company goes through.

“I look at my job as making water the best it can be,” Long said. “We’re here for our customers, and my job is to make sure they’re getting the best quality possible.”

For several years now, Trussville has been awarded a number of times on the quality of its water, and that process was something girl scout troop leader Cathy Carter wanted her girls to understand, as well as to help them earn a badge.

“I just wanted them all to know how water comes from rain to their house,” she said. “I think these girls have a different view on it. The only thing they knew about water was in a lake or the faucet or their swimming pool. Now they know how it gets there.”

The girls will take their knowledge from the tour and implement it with a presentation or demonstration about the water process. One group, the Daisies, are even planting a garden as their demonstration. 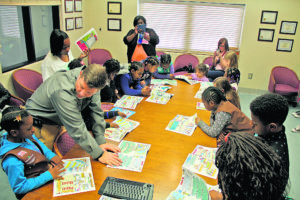 Girl Scouts look through the activity books they were given showing the water process. Photo by Chris Yow

Showing the girl scouts how water gets from the original source to the tap is a tour Long loves to give, and Monday was no different. The girls learned about the water cycle along with the treatment processes such as filtration, flocculation, coagulation and so much more. But putting those terms into something the girl scouts could understand was difficult. So, the analogy Long came up with for coagulation was the process of preparing rice krispies treats. The girls certainly understood then.

He explained that Trussville Gas & Water does not use surface water, or water from lakes and rivers. Instead, the company draws around 3-3.5 million gallons of water per day from underground sources. He then showed the group where unfiltered water flows into a 17-foot deep basin inside the facility. The water, having been through nature’s filtration system was clear enough to see the bottom of that basin.

From there, the tour led the group to the filtration stage where the raw water was run through several filters before finally being treated. Once treated, Trussville Gas & Water customers are then provided with some of the state’s purest water.
How do they know the water is ready? Testing, of course.

“We run a number of tests that will tell us the stability, characteristics and quality of the water, and that tells us how to adjust our process to make it the best it can be,” Long said. “We run tests daily to find out what our optimal levels should be, and we adjust that accordingly.”

Several other city systems have toured the Trussville plant to see exactly how the plant works in order to design new systems in a similar manner. The facility was built in the mid-1990s, but still remains one of the top-of-the-line facilities in the state.