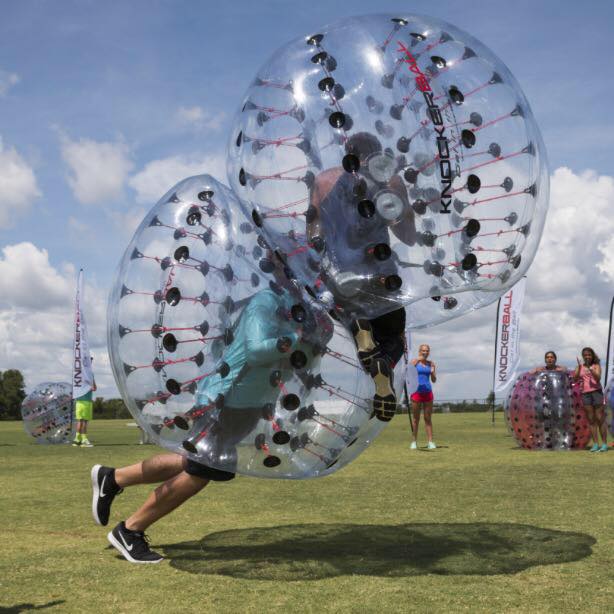 By Nathan Prewett
For The Tribune

TRUSSVILLE – If you’ve never heard of Knockerball, that’s because it hasn’t been around long. Ryan Hammock, owner of Knockerball Trussville, described it as “very new,” saying, “It’s only been around for maybe three or four years now. But we’re bringing it here in full force.” 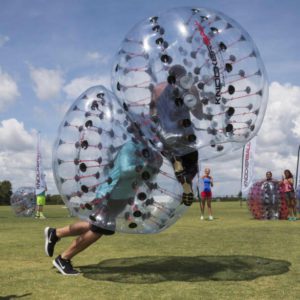 Hammock is a Springville resident that spent some time in the Marine Corps and was medically discharged in 2009 after a tour in Afghanistan. He worked in several businesses before having the idea to start Knockerball Trussville while managing a mobile car wash.

The idea was inspired by his daughters, who held a fascination with Knockerballs. Knockerball Trussville is a local, independently owned company that is an affiliate of Knockerball USA, a company that makes and distributes the products.

A Knockerball is an inflatable, single chamber sphere with handles and shoulder straps that go over a person’s body. The ball allows people to roll, flip and “almost defy gravity,” as well as play different games such as capture the flag and bubble soccer.

While children can definitely take part, anyone who is under 18 must be supervised by an adult while using one.

“It’s a good way to get out of the house and do something that makes you happy,” Hammock said. “Adults can do it, kids can do it, anybody can.”

Bubble soccer is one of the most popular sports to use with Knockerball. The pastime has gained some popularity outside of the U.S. and some have even formed leagues dedicated to bubble soccer. Hammock said that people can bring new games that haven’t been played before in Knockerball. 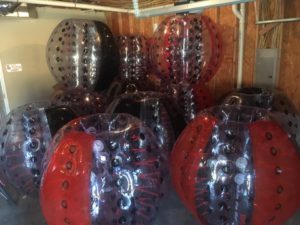 There are different prices for different packages. Anyone can rent four Knockerballs at a time up to as much as ten.

“We’re the cheapest in the area,” Hammock said on pricing. “There are other Knockerball businesses around but we got them beat.”

He said that because he doesn’t run Knockerball Trussville full time, he is able to keep the prices relatively low on rentals.

Knockerball can be used at a variety of events. The products have been requested at birthday parties, church events and even at family reunions.

Hammock said that his business is “100 percent mobile,” which allows him to cover anywhere in Alabama. But while Knockerball Trussville can service anyone in the state a price is charged for anywhere that is 20 to 30 miles out of Trussville.

Hammock hopes to add more products for customers to rent in the future. He also hopes that a league can be formed for sports with Knockerball.

“We try to offer as much as we can,” Hammock said. “It’ll all come eventually. Right now Trussville is my number one priority.”

For more information about Knockerball Trussville, visit www.knockerballtrussville.com or their Facebook page.