Mayor Buddy Choat is sworn in as Trussville's new mayor.

TRUSSVILLE — When Buddy Choat took the office of mayor close to four months ago, he had some ideas on what he wanted to improve in the city of Trussville. 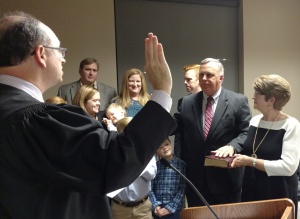 Mayor Buddy Choat is sworn in as Trussville’s new mayor.

The top priority has been the improvement of communication, not only among city workers, but to the community. With his new style of leadership, the growth in that area has been something Choat believes has been a success.

“It was kind of eye-opening for me how much people were starving for news and information,” Choat said.

Simple things like filling out an application to serve on one of the city’s many boards were not easily accessible or the process of how to do it was not well-known.

“Now anyone can go to our website and fill out an application instead of coming to City Hall to get a piece of paper to fill out and bring back,” Choat said.

In fact, with the new system, the number of applications for vacant board spots has substantially increased.

“We used to have to seek out people to serve on these boards,” Choat said. “Now we’ve got a way for everyone who has a desire to serve to let us know.”

Communication among city leaders and the community is not the only place it has improved. Choat met with all of the city’s department heads together earlier this year, and that meeting turned into a meet-and-greet. 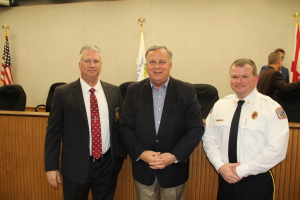 “It was amazing how many of our department heads didn’t know each other,” Choat said. “We spent the first meeting just going around the room and telling a little about each other.”

That knowledge, Choat said, will help the city in the end because there are times when one department has a set of skills that will benefit another department.

In fact, Choat is meeting with department heads monthly as well as the city council quarterly, which will allow for an open discussion and dialogue among those leaders.

Other areas where Choat has focused has been public safety. Obviously, the city promoted two of its own to take over as the police chief and the fire chief, but more importantly, both departments are believed to be at full strength as far as personnel is concerned. The city must hire through the Jefferson County Personnel Board, which elongates the process, but Choat believes the departments are full.

“We believe we’ve rectified the issue of personnel,” Choat said. “We just hired two police officers and we’re about to hire one more.”

Additionally, the police department will receive new vehicles soon, as the city council recently approved their purchase. The city is attempting to replenish the fleet of cars over a period of time rather than replacing them all at once.

Other hires in this administration includes Wayne Sullivan as City Engineer, along with his Public Works duties.
“Wayne is a guy who can talk the talk and walk the walk,” Choat said. “He works well with contractors who are doing road projects because of his longstanding experience as an engineer.”

Stacy Frazier has been hired as the executive assistant to the mayor, and has been instrumental in the communication of the office.

“Stacy has done a great job with our website and social media pages,” Choat said. “She’s jumped in and done very well. She’s a real team player with our staff.”

The city has also hired new office staff to replace some who have retired. Additionally, Rick Stotser of Massey, Stotser and Nichols is the new city attorney, while Johnny Amari is the city’s new public defender. Both are Trussville residents.

“It’s important for people understand who are in our courts,” Choat said.

One of the major points for Choat is selling the city of Trussville, and having local businesses being utilized by the city is important to recruiting new business.

“I think there are going to be many new developments coming in the next few years,” Choat added. “We’re going to make a difference — particularly in our downtown market.

“There will be people coming to our downtown because they will see the value of our community and are looking for new experiences.”

Recently, Slag Heap Brewing Company was announced as one of downtown’s newest businesses, and Choat said it was one major step in the right direction. Several other businesses, including Hitchcock and Maddox Financial Services have also located downtown in Trussville.

“I think, as a city, we are getting things done,” Choat said.