PINSON — Two passengers in a car accident were injured when the car they were in crashed into a house in Pinson, according to Erik Harris. 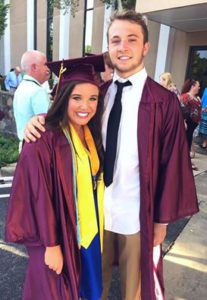 Tate Brannan, right, was involved in a car accident Wednesday that left him in a coma. Photo via Facebook

Tate Brannan was ejected from the vehicle during the accident, and  is in a coma, according to the report.

Marshall Tanner, a senior on the Pinson Valley baseball team, is reportedly suffering from a concussion and separated shoulder, but his injuries are not considered life-threatening.

The driver’s name has not yet been released.

Members of the Pinson community, including several former classmates have reached out on social media to express their support and prayer for Brannan.

“Praying for you Tate Brannan you got this. Every say a prayer for Tate he really needs them right now,” Kayla Lee Welch said.

“Everyone please stop and say a prayer for a friend of mine,” Bailee Bryant, pictured with Brennan above, asked on Facebook. “You can pull through this Tate.”