CENTER POINT — The dirtier a firefighter was used to be something he or she would tout. Now, however, studies are showing that dirty firefighting gear is leading to cancer in firefighters.

The Center for Disease Control (CDC) completed a study in 2015, showing firefighters were at a higher risk for cancer diagnosis or cancer-related deaths. The study also went on to show the chance of lung cancer increased by time spent at a fire, while the chance for leukemia increased with the number of fire calls run. 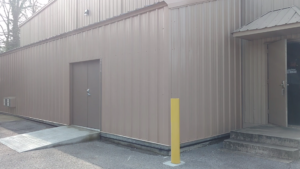 The Center Point Fire District is hoping to curb those statistics in its department.

The CPFD covers three cities in the area. Each of those cities — Center Point, Clay and Pinson — have agreed to help fund a project for their stations to construct a room in order to keep gear clean.

Keeping the gear clean is the biggest step a firefighter can take to eliminating toxic cancerous cells.

“The reason we’re doing this is because we want a healthy and clean atmosphere. We work in a dirty atmosphere,” Center Point Fire District Chief Donnie West said. “These guys wear protective gear, but this room will allow us to relocate the gear to a room where we can get the product of that off the uniform. Safety is our biggest concern.”

Currently the department keeps its turnouts, or uniforms, along the wall of the bay where vehicles are stored and cranked.

“All of the soot and exhaust fumes from the vehicles go straight on to those,” Captain Chris Horn said. “We’re putting them on and putting them inside of our trucks. Before we even get to a fire, we’ve already got cancer on us.” 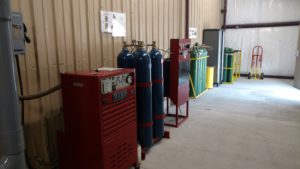 Those cancerous cells are seeping through firefighters’ skin, and the biggest area of concern is the neck. A firefighter’s hood, worn under a helmet, is often times just pulled down over the neck area once a blaze is under control. That simple habit is something the study has shown to cause much damage.

“Now they’re telling us the first thing we need to take off are the hoods. Because that’s where they’re finding the cancer in us; in our throat and neck area,” Horn said.

To combat that issue, the department has purchased a heavy-duty washing machine known as an extractor. This machine will not only wash the gear, but will extract many of the toxins firefighters walk into during each fire. The department has also mandated each firefighter wash their hood weekly on Sunday.

“Many of the older homes were made of wood and timber, but now there are so many synthetics and products that produce toxins,” West said. “It’s very important this happens because we’re finding out that firefighters who maybe didn’t wear respiratory gear or didn’t clean their gear are suffering from various forms of cancer.”

The department is asking each of the cities it covers for $15,000 per firehouse to add these rooms to the stations. The money is going to purchase a building kit, and the firefighters are actually performing all labor, as well as running calls. Center Point Fire Station 1 ran close to 8,600 calls in 2016, making it the busiest station in the state of Alabama, according to Horn.

The rooms will store off-duty firefighters clean gear, as well as the oxygen tanks and fill units used to fill those tanks.

“This is a movement trying to get a clean atmosphere and lessen our exposure,” West said. “For the money that we’re spending, it’s a value. We want to make sure our men and women are protected at all times with clean gear.”