MONTGOMERY — Alabama Governor Robert Bentley has been booked into the Montgomery County Jail on two campaign finance charges — both misdemeanors. 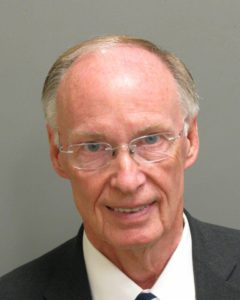 Bentley, who, according to sources, close to the situation is set to announce his resignation today, faced up to four felonies following a ruling by the Alabama Ethics Commission.

An announcement of his resignation is likely coming at 5 p.m. in the old House chambers of the state capitol building.