Vanderbilt Commodores lose to the Auburn Tigers 23-16 in NCAA football at Jordan-Hare Stadium in Auburn, Alabama. Photo by Joe Howell

Cunningham could be first round pick in tonight’s NFL Draft

PINSON – He is known as a silent warrior.

He came to SEC Media Days in 2016 as a featured player and didn’t even tell his mama. 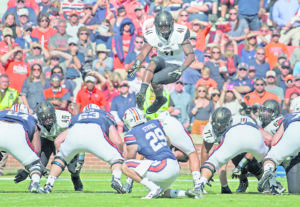 Vanderbilt Commodores lose to the Auburn Tigers 23-16 in NCAA football at Jordan-Hare Stadium in Auburn, Alabama. Photo by Joe Howell

But former Pinson Valley and Vanderbilt star linebacker Zach Cunningham has chosen to let his actions do his talking, and Thursday night that decision will almost certainly garner him a reward. Cunningham is expected to be selected in the first round of the 2017 NFL Draft.

If that occurs, he will be the first first-rounder in Pinson Valley history.

The only other former Pinson Valley football player drafted by the NFL was Warren Lyles, a ninth-round pick from Alabama in 1982.

CBSSports.com analysts have Cunningham going anywhere from 17 to 27 after impressive workouts. The All-American is projected at No. 20 to the Denver Broncos by veteran NFL scout Frank Coyle of NFL DraftInsiders.
Coyle rates him as the No. 2 inside linebacker in the draft after Alabama’s Rueben Foster and writes that Cunningham is one of the most versatile and diverse defenders he’s ever scouted and has the tools to play as three-down defender in any package as a rookie.

He’s picked as the best cover ILB and with Foster is rated as the only blue-chipper among the group.

Writes Coyle: “Tall rangy versatile junior has performed at a high level since his redshirt freshman season … . High cut angular frame with thin lower body, long arms and the movement skills of a 200 lb. athlete. Lined up at a few backer positions in their flexible 3-4 scheme where he excelled in both run and pass defense. He has the athleticism and fluidity to match up with backs and tight ends at the next level. Very productive big play defender since starting his final five games in 2014. He shows fine balance, fluidity and changes directions smoothly with top burst to close on the ball and finish. …. Very quick to read the play, shows good awareness in coverage and is a very reliable tackler. Reads and reacts quickly, is adept at avoiding blockers and makes plays all over the field. When blockers reach the 2nd level he is surprisingly adept at disengaging, though his lack of bulk can cause problems inside the box. Extremely effective as an open field tackler, showing good form to securely and consistently wrap up with both arms. While he arrives at the ball quickly, he can be a violent tackler. In the tackle box, he can struggle when engaged with big interior linemen. He can struggle to anchor if he does not gain a quick advantage and beat blockers to the gap. Can get engulfed by blockers at the line and will take risky angles to avoid them. At times, he can raise his pads and tackle high and give ground to make a stop. …”

ESPN will televise the draft Thursday night beginning at 7 p.m. CDT. Only the first round is Thursday. Rounds 2-3 are Friday (starting at 6 p.m.) and Rounds 4-7 are Saturday (11 a.m.).