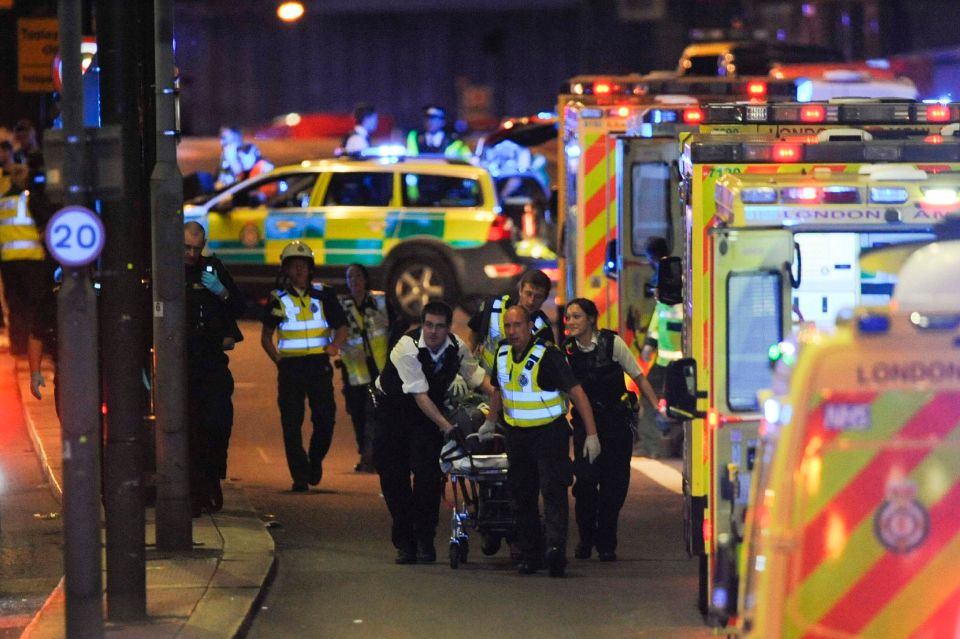 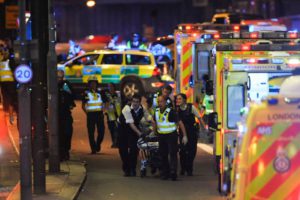 The assault unfolded — and ended — quickly, with police fatally shooting the three attackers within eight minutes. But the men had achieved their apparent goal of turning a balmy summer night in Britain’s capital into a scene of carnage.

It began Saturday night when a van veered off the road and barreled into pedestrians on busy London Bridge. The three men fled the van with large knives and attacked people at bars and restaurants in nearby Borough Market, police and witnesses said.

Emergency officials said 48 people, including a transport police officer and an off-duty officer, were treated at hospitals across London. Some suffered life-threatening injuries. The death toll of seven didn’t include the three attackers.

It was the third major attack in Britain in the past three months. Britain was already on edge after a suicide bombing two weeks ago at an Ariana Grande concert in Manchester, in northwest England, that killed 22 people and injured dozens more. Grande and other stars are scheduled to perform a benefit concert for victims under tight security in Manchester Sunday night.

May, facing an election Thursday, said the recent attacks, including an earlier one outside Parliament in March, are not directly connected, but that “terrorism breeds terrorism” and attackers copy one another. She said five credible plots have been disrupted since March.

“They are bound together by the single evil ideology of Islamist extremism that preaches hatred, sows division, and promotes sectarianism,” she said. “It is an ideology that claims our Western values and freedom, democracy and human rights are incompatible with the religion of Islam.”

The sequence of attacks has at times overshadowed the election. In March, a British convert to Islam ran down people with a vehicle on Westminster Bridge, killing four before fatally stabbing a policeman on Parliament’s grounds.

Then came the May 22 Manchester concert bombing. After that attack, Britain’s official terrorism threat level was raised from “severe” to “critical,” meaning an attack may be imminent. Several days later it was lowered again to “severe,” meaning an attack is highly likely.

Britain’s interior minister said the country’s threat level won’t be raised because police believe there are no perpetrators still on the loose.

May called on international communications companies to do more to block cyberspace to extremist groups who use it for recruitment and for encrypted information about plots.

The prime minister said the election would be held as scheduled.

Major parties suspended national campaigning Sunday out of respect for the victims, although the right-wing UK Independence Party said it would keep campaigning to show the extremists they couldn’t sidetrack democracy.

May’s Conservative Party had been expected to win by a wide margin but recent polls have showed the race tightening considerably. It is unclear how the unprecedented violence in the run-up to the election will impact voter sentiment.

Mayor Sadiq Khan said Londoners should remain vigilant but added: “I’m reassured we are one of the safest global cities in the world.”

Khan said some of the injured were in critical condition. French and Spanish citizens were among the wounded.

Assistant Metropolitan Police Commissioner Mark Rowley said that while police believe all the attackers were killed, the investigation is expanding.

“We believe three people were involved, but we still have got some more inquiries to do to be 100 percent confident in that,” he said.

As dawn broke over the capital, a large area on the south bank of the River Thames remained cordoned off. Police told people to avoid the area, leaving tourists and revelers struggling to get home. London Bridge and the adjacent train station, as well as nearby Borough subway station, were still closed.

Only hours before, bursts of gunfire echoed through the streets — likely from armed police — and at least three blasts rang out as officers performed controlled explosions after sweeping the area for possible bombs.

Renan Marquese, a sous-chef at a tapas restaurant, said he was working when he heard chaotic sounds outside the restaurant. He opened the door only to see three bodies on the ground.

“When I open the door I see three dead people on the floor,” he said. “People running everywhere, police shouting to run away.”

He said that he helped a man and his partner, even taking the woman into his arms because she was too upset to walk properly. He said it took him 20 minutes to carry her across the bridge, stumbling all the way.

“It was really scary,” he said.

Witness Gerard Vowls told The Guardian newspaper that he saw a woman being stabbed by three men at the south end of London Bridge as the assault developed. He said he threw chairs, glasses and bottles at the attackers in a bid to stop them.

“They kept coming to try to stab me. They were stabbing everyone. Evil, evil people,” he told the newspaper. “I want to know if this girl is still alive. I’ve been walking around for an hour and a half crying my eyes out. I don’t know what to do.”

Medics treated the injured near the market as shocked people cried and shouted around them. Police officers yelled at people to run from the area.

Police received the first call of reports of a vehicle hitting pedestrians on London Bridge at 10:08 p.m. (2108 GMT).

Soon after, reports started coming in of stabbings at Borough Market, a nearby area full of bars and restaurants surrounding a popular food market.

Police tweeted a warning telling people in the area to run to safety, hide and then call police if it was safe to do so. They asked Londoners to “remain calm but be alert and vigilant.”