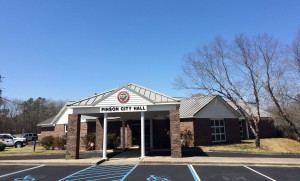 PINSON – Pinson City Council met on Thursday night for their regular meeting. Among the discussions was an extension of a lease agreement with the Jefferson County Board of Education and an amendment of a lease on Palmerdale Homesteads Community Center.

An extension was made to a lease agreement with the Jefferson County Board of Education on Palmerdale School. City Attorney Shane Black said that the lease had been for 20 years but the extension would be for 90 years. The council voted to authorize Mayor Sanders to sign for the extension.

A hearing was held on the abatement of 3142 Sleepy Hollow Drive in Pinson. The property at the address was declared a nuisance by the city as it had overgrown grass, garbage, trash and unused cars. A maintenance worker at the meeting said that most of the grass on the property has been cut but rain has caused further cutting to be delayed.

The council tabled further discussion of the property for two weeks to allow for the rest of the grass to be cut. No one from the public made any comments on the matter.

The first reading of an amendment to a sublease with Palmerdale Homesteads Community Center was presented at the meeting. The amendment adds several requirements for accessibility components. Three items were added: that people with disabilities “may ask for and receive assistance relating to turning on/off the light switch; operating the hood, range and oven controls; using the faucet controls; and reaching the common use sink.”

The amendment also prohibits the gym stage from being used during any programs where the public is invited on stage. The last item requires that the light in the accessible restroom be turned on before its use.

In other business, the council discussed the possibility of adding more features to the Splash Pad at the Pinson Bicentennial Park, namely grills but also picnic tables as well. The council is considering buying grills from a company called GameTime which could be mounted at the facility for public use.

The council approved a renewal of the salary supplement for the principal of Pinson Valley High School. The council also granted Pinson Elementary School principal Karen Jones’s request to pave a section of School Rd at the elementary.

At the end of the meeting the council voted to go into executive session to discuss real estate, trade and commerce.

The council has tentatively set the next meeting on July 20 at the Palmerdale Homesteads Community Center but may be pushed to August 3rd as two council members will be out. The council will notify when the meeting date is determined.

EDIT: Updated with additional information on the next council meeting.