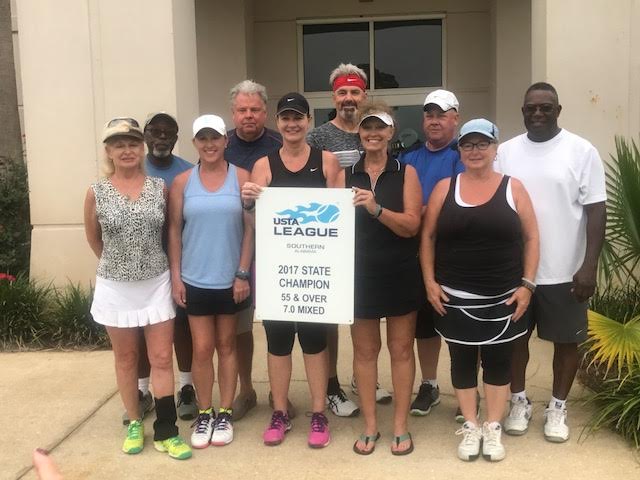 The winners of the state USTA league championship. Photo submitted by Carol Lockhart.

TRUSSVILLE – A tennis team that practices regularly at the Racquet Club in the Trussville Sports Complex had been taking part in the United States Tennis Association (USTA) state tournament for five years, coming in at second place “many times.” But this year they came through and took first place, which will bring them to a national tournament in Little Rock, Ark. in November. 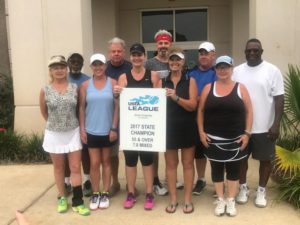 The winners of the state USTA league championship. Photo submitted by Carol Lockhart.

“It was neck in neck. I mean, it was just really fun, tough competition,” said team member Carol Lockhart on the tournament.

The 2017 USTA League State Championship took place in Gulf Shores where teams play six matches each. Whichever team has the best ranking is considered Round Robin. Fellow member Barbara Snider said that most matches in the tournament “went into third set tie-breakers.”

“It’s never a walk in the park,” said Lockhart. “When you’re at the state tournament you’re playing people that are committed to playing tennis at all ages. It’s something we look forward to. We practice before we go and work some kinks out. We put a lot of energy into preparing.”

The teams at the tournament are arranged according to their ranked abilities. In this competition, the teams had to have players ranked at 7. Players have to be ages 55 or over.

“It’s a challenge at this age to have something to do besides just work,” Lockhart said. “I do like competition. I like the state competition because you’re playing people you don’t know and you don’t know their game, so you have to play your best to outsmart them.”

Members of the team from the Racquet Club come from different cities. Three are from Trussville while others hail from Moody, Pelly City, Odenville and Oneonta. Previously, they have played at competitions not only in Mobile but also in Huntsville, Decatur and elsewhere.

It probably goes without saying that teamwork is every bit as important as skill. Snider said that getting along with your partner is an integral part of the game.

“We have a lot of good chemistry on this team,” Snider said. “The secret is to have a partner that you trust. We all have our skill set and we try to put people together that can complement each other’s game. Like if we have someone who can run fast but we have a strong person at the net.”

With some practice and dedication, anybody can get into tennis and take part in competitions, Snider said. And in addition to good exercise it’s also a great way to form bonds and make friends along the way.

“It’s not something we grew up doing so it’s never too late to start tennis,” Snider said. “Because you can play it at whatever level you’re comfortable at. There’s a lot of comradery and enjoyment in this.”

And more often than not, a tennis team can be as much as family to each other as they are friends.

“For us and for most people – even if they’re not on our team – it’s actually family,” Lockhart said. “It’s the family aspect of it. We’re friends. If anybody has anything that’s going on we check on them. That’s what we do.”