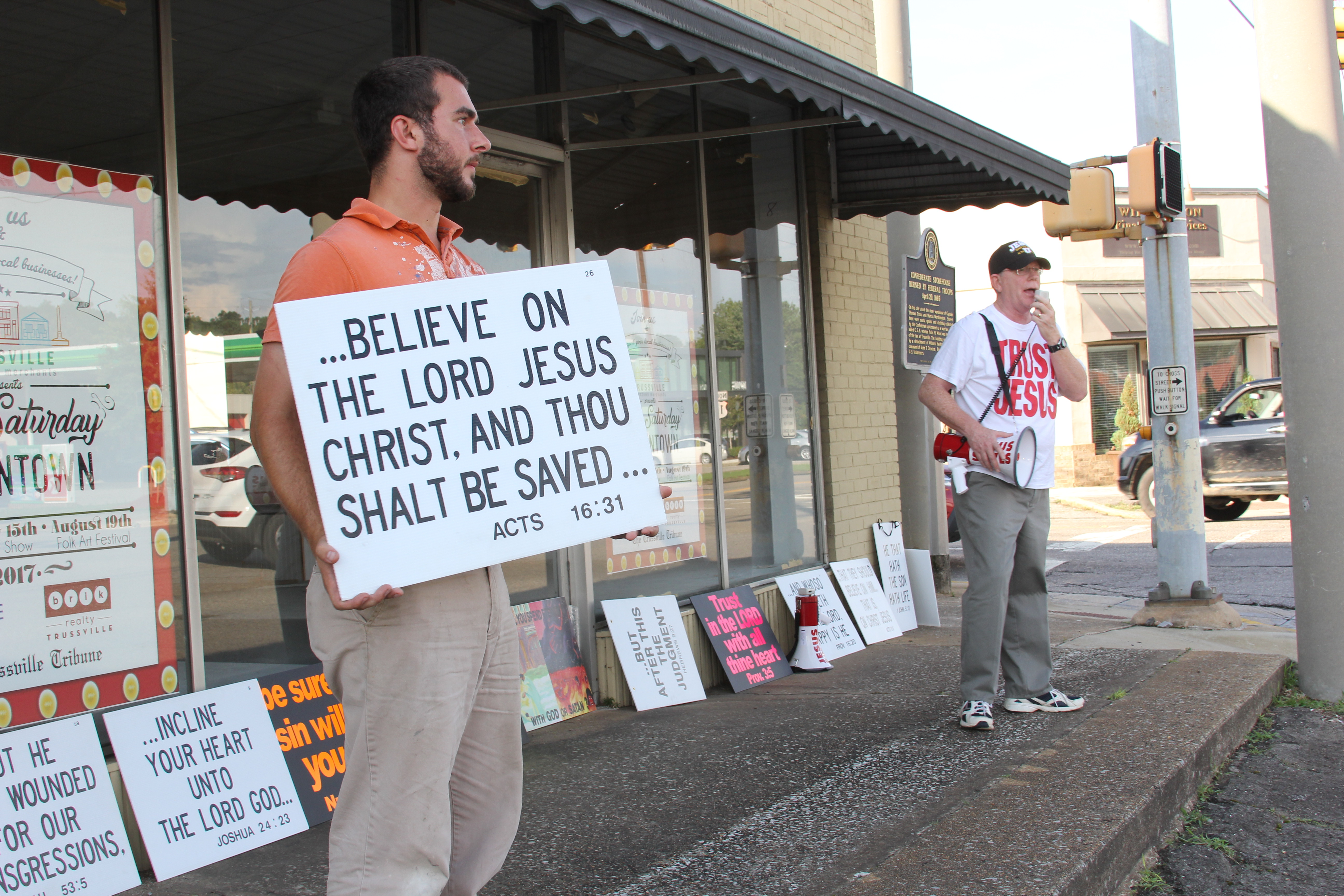 TRUSSVILLE — As motorists traveled on Main Street and Chalkville Road Friday afternoon — many presumably driving home from work — half a dozen members of area churches were at work, performing what they say is a duty instructed by The Holy Bible.
Terry Watkins, 62, the pastor of Pearl Lake Baptist Church of Springville, preached into an electronic Megaphone under the awing at the former location of Braden Furniture while his family and other church members hoisted signs with messages derived from the Holy Bible.
Watkins warned those driving along Main Street of the consequences of dying without having accepted Jesus Christ as their personal savior.
“The Bible says in Mathew 16 to go ye in all the world and preach the gospel,”Watkins said. “We’re just trying to do what the Lord wants us to do.” 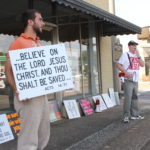 To make sure those who can’t hear Watkins’ words get the message, he wore a white T-shirt Friday that said in large red letters “TRUST JESUS”.
Other members of the church also bestowed messages of salvation through placards they held up.
The missive on a sign held by Watkins’ wife, Esther, was the message “For whosever shall call upon the name of the Lord shall be saved,” a verse from the Book of Romans.
Another church member, Karen Zito held up a sign with a verse from the Holy Bible’s Book of Acts. It said “Believe on the Lord Jesus Christ, and thou shalt be saved.”
Joshua Rotche also took a turn preaching Friday afternoon.
“If you reject the son of God, if you reject Jesus Christ, our Father will also reject you, and you will spend an eternity with the devil and his angels in a lake of fire,” Rotche warned. “We don’t want this for you.”
Terry said 95 percent of feedback from those to whom he preaches on the street is positive.
“People will give us a thumps-up or a little honk,” he said, adding that one well-wisher brought the group drinking water.
However, Terry said his group does encounter some adversaries when preaching at different locations where the church members take their message. He said usually this only entails a long honk from critics’ horns or the occasional obscene gesture. However, in rare instances he said he has been approached by individuals who want to argue with him.
Esther said once someone threw mustard and mayonnaise packets at her husband. However, she added these critiques do not hamper her desire to share their testament with strangers.
“We just want people to know Jesus is the only way to heaven and they have to believe in him and receive him.”
Terry said, “A lot of people have never heard the gospel, they’ve never heard these scriptures.” He added. “We’re just ordinary Christians that want to serve God.”