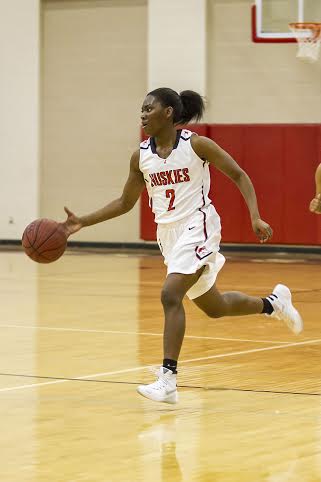 MONTGOMERY – The North girls and boys posted hard-fought victories Wednesday night over the South in the North-South All-Star basketball all-star competition with a crowd of more than 2,500 in attendance at Auburn University-Montgomery’s Basketball Complex. 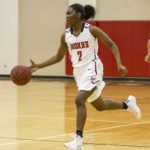 Hewitt-Trussville’s London Coleman helped the North’s girls to a 76-67 to improve to 18-3 in the series that got underway in 1997, and the North boys captured a 75-64 win and now holds a 48-27 edge in a series that got its start 64 years ago in 1953.
Coleman scored five points, grabbed a pair of rebounds and made a key steal in the win.
Homewood’s Ajah Wayne scored 22 points, grabbed eight rebounds and had three steals to earn MVP honors for her team and led the North to its 18th victory in the 21-year series. She had 16 points in the first half – virtually unstoppable when going inside and dead-on at the foul line as well.
LeFlore’s Daisha Bradford had 15 points, four steals and five rebounds to capture MVP honors for the South.
Hazel Green’s Brooke Hampel added 12 points, Allie Cruce of Lauderdale County had 11, Karleigh Sledge of Deshler chipped in nine and Athens’ Alexis Woods had eight to round out the North offensive leaders for North coaches Mike Chase of Spain Park and Lisa Bates of Sand Rock.
Chase was once head coach at Clay-Chalkville.
Samson guard LaTascya Duff added 11 points and five rebounds for the South. Teammates Brianna Harris of Blount and Lakhylian Rankins of Faith Academy chipped in nine points each. The South was coached by Geneva’s Rich Bixby and R.C. Hatch’s Willie Morgan.
The North dominated inside out-rebounding the South 53-36.
Huffman guard Travarus Carroll had a game-high 27 points to help the North boys win for the 48thtime in the 75-game series. No bucket was bigger than his startling round-house dunk with 57 seconds left in the third quarter that put the North ahead 48-40.
The South rallied midway through the fourth period to tie the game at 53-53 but Carroll sank a 3-pointer just under the four-minute mark to push the North ahead by four 62-58.
Carroll, the North MVP, finished 8-of-11 from the field, including 3-of-3 from the 3-point arc, and was 8-of-10 at the foul line. He also had five rebounds. Trey Jemison, a 6-foot-11 center from Homewood, added 13 points, 11 rebounds and two blocked shots for the North, coached by Paul Bryant’s Shon Peck-Love and Muscle Shoals’ Neal Barker. Parker’s 6-9 center Xavier Williams also had nine points and six rebounds.
The South, coached by Tony Hayes of Monroe County and Douglas Moore of Bullock County, were led by Anquavious “Quay” Pollard’s 23 points and eight rebounds. The 6-6 forward from Lanett was 5-of-12 on 3-pointers and a perfect 4-of-4 at the foul line. He also had three steals. Lanett teammate Emanuel Littles added 11 points and five rebounds.