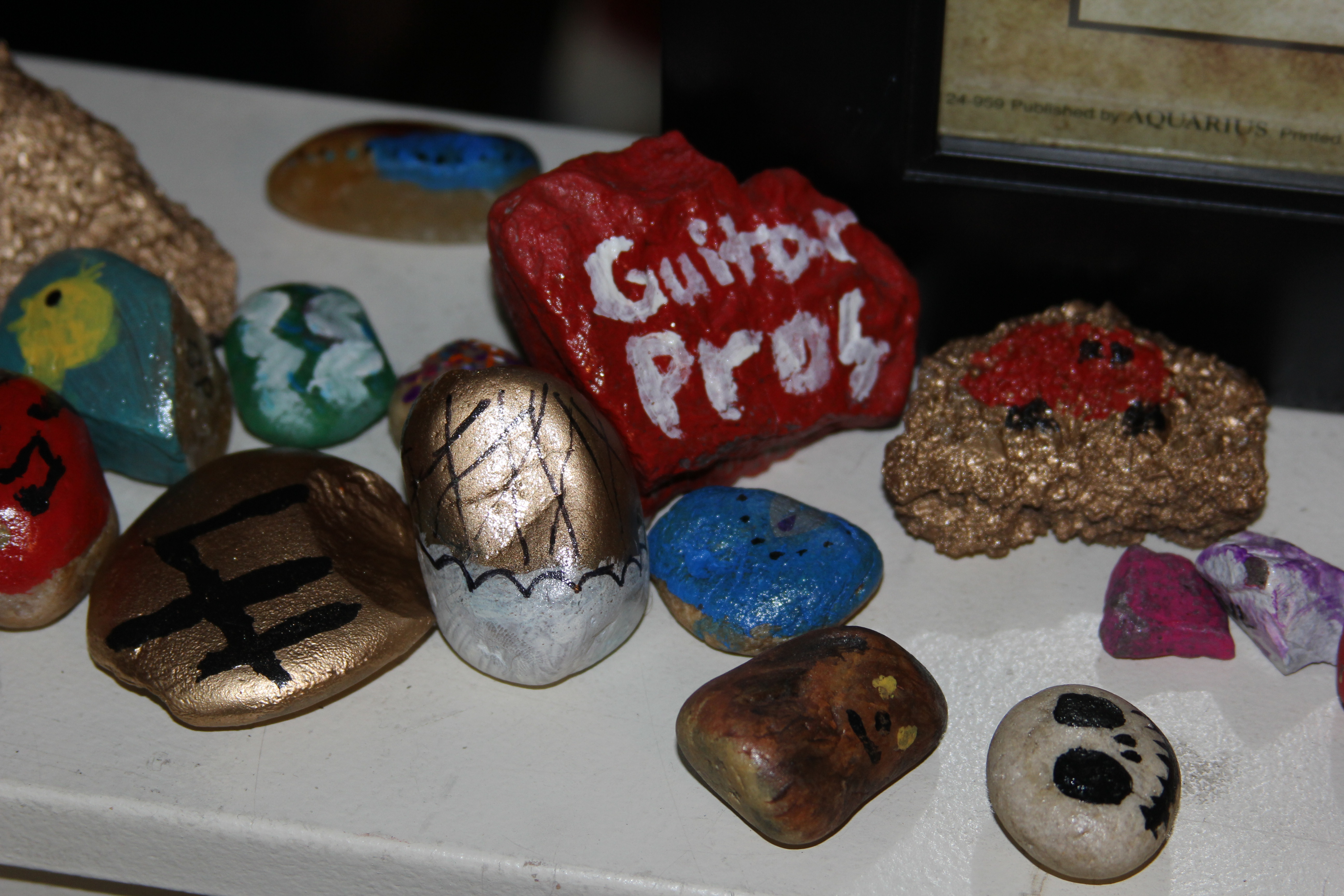 Rocks painted by the family that owns Guitar Pros are displayed at the downtown Trussville store.

This summer, rocks are on a roll. 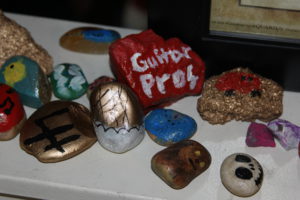 A trendy game involving painting rocks and hiding them has become popular in Trussville and other area communities, thanks in part to social media.

According to some participants, part of the fun comes when those who find the stones post pictures of the painted pebbles on Facebook.

“We found some outside and we really didn’t know what they were,” said Tara Bentley, co-owner of Guitar Pros in Trussville.

When Bentley and her family found out about the pastime, she said they were ready to rock. “We painted rocks outside, and they went and hid them yesterday,” Bentley said last week. “And somebody has already found them and posted it on Facebook.”

Bentley said her family and friends used acrylic paint and clear coat to decorate their gravel. At least one rock they created included the downtown music shop’s logo.

Other businesses are also capitalizing on the painted rock craze.

A Facebook page titled “Trussville City Rock Hide And Seek” popped up over the summer to showcase photos of the works of art as well as the children who create them and find them.

On the Facebook page, various restaurants and other companies have given hints about hiding places of their works.

Laurie Hopper, who founded the Facebook page with her children, said she learned about the trend from a Facebook friend in  South Carolina.

” I thought Trussville would be a perfect place to do this same thing,” Hopper said.  “I had no idea it would take off like it did.”

“It’s a great little experience for them to find something unusual,” Bentley said. She added that those who find the rocks usually hide the rocks themselves so someone else can enjoy the pleasure of the discovery. “The rocks can go through hands, four, five, six, seven, eight times,” Bentley added.

Some are still learning about the rock fad.

“When our custodian opened the doors at city hall … there were three painted rocks just outside the door,” Porter wrote in an email to The Trussville Tribune seeking information about the matter.

To make sure those who find rocks painted in Trussville know where the pebbles originated, Bentley said local participants usually write “TVL” on their rocks.

“It’s kind of a thing where you see how far it goes,” she said.

Hopper said  “Some of our rocks have ended up in Canada and Gulf shores.”

Robyn Weldon’s daughters, Zoe, 6, and Mia, 2, now have a rock painting workshop at their home.

“We paint them as a family almost nightly,” said the Springville mother.

Zoe said she enjoys painting, but her favorite thing about this activity is “finding beautiful rocks that other kids made. ”

Thirteen year old Rayleigh Farley said she has gotten several of her pals involved in the activity.

“It brings such a great joy to mine and my siblings’ faces,” she said.

Even adults have been charmed by the phenomenon.

Annette Gorham of Trussville  said her her grandchildren got her into the painted rock program.

“Have to admit I’ve been drawn in too,” she said.

Cheryl Mathews agreed. ” I have enjoyed sharing this simple pleasure with my grandchildren. They have gotten so much joy from painting, hiding and finding rocks. Summers when I was young were lazy and relaxed with lots of playing outside,” she said. “Painted rocks might have helped children feel a little of that.”

“I get just as excited as my kids do when they find a rock,” admitted Kristina Kinner.