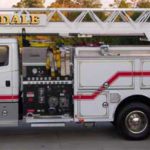 David Smith, the city’s public safety director, said an interim chief has not been named for the volunteer city fire department. He added that Fultondale officials are now in the process of finding the next leader for the  department that boasts approximately 30 volunteers.

Smith said he does not know why Powell stepped down or the exact day when he resigned.

Fultondale Mayor Jim Lowry did not immediately return messages left at his office today prior to this report being published.

Powell also could not be reached for comment today.

“We’re going to take our time to make sure we get the right person for the job,” Smith said about the search for the city’s next fire chief. “We’re not in a big hurry.”

Although an acting fire chief has not been named at this time, Smith said the fire department will continue to function normally in the interim.

According to the fire department’s website, Powell joined Fultondale Fire and Rescue in 2007. The website also stated he is employed as a career firefighter and paramedic at Homewood Fire and Rescue Service.

The site also states Powell earned an associate’s degree from Northwest Shoals Community College and a bachelor’s degree from the University of Alabama.