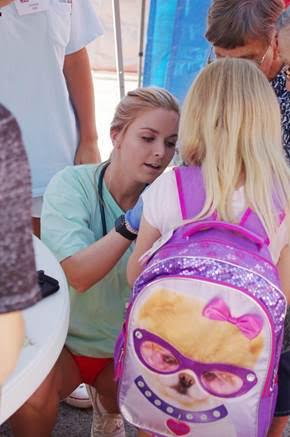 Alexis Caudle, a 22-year-old Trussville native and UA senior, works at a health station at a back-to-school event in Cumberland, Kentucky.

Trussville native uses nursing skills to give back 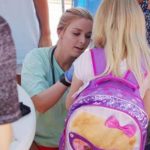 Alexis Caudle, a 22-year-old Trussville native and UA senior, works at a health station at a back-to-school event in Cumberland, Kentucky.

But the 22-year-old Trussville native had never truly grasped what that meant until she came face-to-face with the realities of poverty this summer.

Caudle was one of more than 20 Capstone College of Nursing students who spent a week in Cumberland, Kentucky, performing health screenings on both children and adults, as well as participating in other service projects.

“I had never seen a community who lived with so little,” said Caudle, a University of Alabama senior majoring in nursing. “I’ve always been privileged, in that sense.”

The students are part of a group called CCN Serve, which is a service learning opportunity for UA nursing students to help out the surrounding community, as well as other states.

The medical mission trip to Kentucky was the group’s first out-of-state experience. They partnered with Club 180 Ministry, a not-for-profit organization based out of Cumberland, Kentucky, that works to meet the “spiritual, emotional and physical needs” of the children and families in that area.

The nursing students set up a health station at a back-to-school event hosted by Club 180. They checked vital signs, height and weight, as well as provided educational information on hygiene, eating habits, exercise, abuse and more.

The students also went out into the community and met with adults, either at their homes or at public places like grocery stores, and checked blood pressure and blood sugar levels and performed hearing and vision screenings.

Caudle said the experience was one she would never forget, both medically and personally.

“It gave me an opportunity to get back to the basics and hone the skills that I’ll need throughout my nursing career,” she said. “But it has also just really opened my eyes to what is out there. It’s helped me be more aware and do as much as I can in those situations and not just be blind to wherever I’m living.”