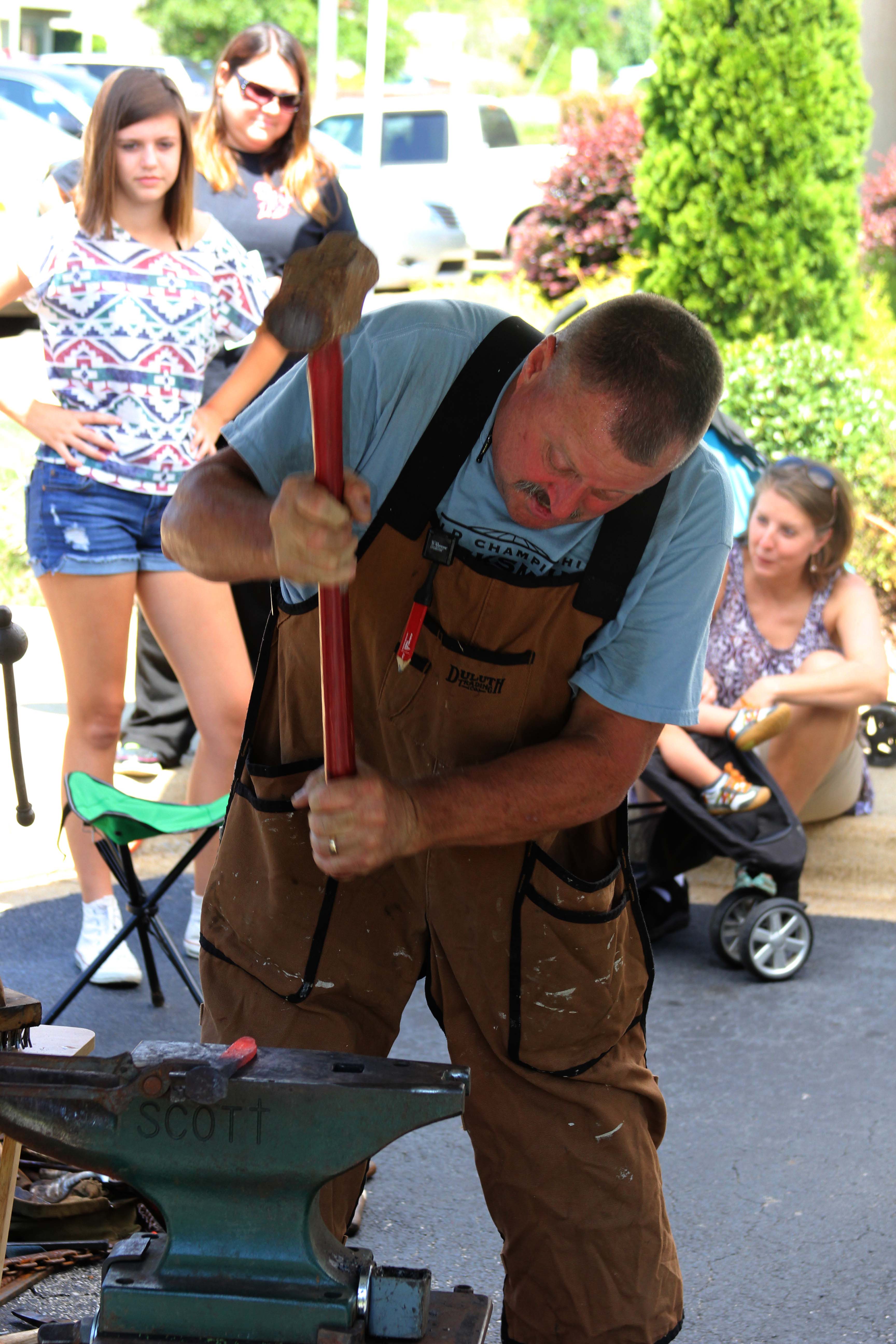 Paul Gibbons pounds an old railroad spike being transformed today into a knife as part of a Third Saturday demonstration at Carroll's Pharmacy.

Although today’s Third Saturday festivities do not officially kick off until 4 p .m., there is already excitement in the air in downtown Trussville as artists set up tents, food  providers get ready to serve  the public and area residents get out and about to enjoy a beautiful summer day. 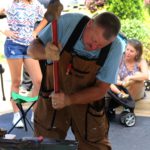 Paul Gibbons pounds an old railroad spike being transformed today into a knife as part of a Third Saturday demonstration at Carroll’s Pharmacy.

The fun started early with a  blacksmith demonstration that was held outside of Carroll Pharmacy.

Greg Carroll, president of the TDMA said the event was held earlier in the day to take advantage of cooler temperatures.

“It’s kind of hot for a blacksmith in the afternoon,” Carroll said about the event held at 115 North Chalkville Road.

Carroll said the blacksmith will be making horseshoes as well as ornamental works.

Those in attendance watched as Paul Gibbons, Bo Walker and other transformed simple pieces of metal into works of art.

One lucky child, Wyatt Williamson, was given one of the pieces constructed today.

Although the blacksmith demonstration is now over, the fun has just began.

As with Third Saturday galas before, there will be a plethora of food trucks set up around downtown Trussville  today to give those at the event new cuisine to sample.

Also, there will be again be a wide array of entertainment during the free gala today that will conclude with performances by DJ Rob Langford, and bluegrass band Shannon and Heather Slaughter & County Clare.

According to a post on the TDMA’s Facebook page, Shannon and Heather Slaughter & County Clare is a big deal among bluegrass aficionados.

“They have had several songs on the Bluegrass Today charts,” the statement read. “If you have not had the opportunity to see them play, you will not want to miss this chance! They just dropped their new single, “That Old Country Road” on Bluegrass Junction on Sirius XM with Kyle Cantrell.”

“We’re going to have good entertainment,” Carroll said. “If we have a good turnout with the weather, we should have a big time.”

The TDMA has announced the list of food trucks that will be in Trussville today. They are:
— Encore Rouge
—900 Degrees Catering
—Off The Hook Food Truck and Catering
—Southland BBQ Restaurant & Catering
—Dreamcakes Bakery
—Pops Cool Spot
—Doodle’s Homemade Sorbets and Ices

Like during past Third Saturday extravaganzas, there will be a ton of fun offered for children today.

Kuttin’ Up is sponsoring a kid zone in the Board of Education parking lot near the food court that will be open till 8 p.m..
Also today , a rock hide & seek kids Area will be located in the quadrant with Dede’s Book Rack, Balancing Point, Brian Plant, Attorney, Three Earred Rabbit, and Straw Hat.

According to Third Saturday organizer Katie Peoples, there will be rocks already hidden as well as the opportunity for youngsters to paint their own rocks to hide.

This kids area will be up-and-running from 2-6 p.m.

Another activity for kids and all ages will be located at Katherine Cindia Designs, Dixie Love T-shirt Company, and Triple Care. There folks will find a tie dye station where shirts and supplies will be provided.

Also in this location there will be an opportunity for folks to do some planting at a Succulent Station. Tie at the tie dye station, all supplies will be provided.

The Succulent Station will be open from 2-6 p.m. today.