CLAY – Clay Mayor Charles Webster took a moment during Tuesday night’s council meeting to speak about several improvements that have been made to Clay-Chalkville High School over the past year, and particularly over the summer. 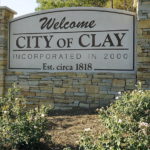 “The high school got a complete face-lift this year during the summer,” he said. “They are actually finishing up construction on the front. (They have) completely repainted the school, took out the purple, put stone up to the windows. They changed the wheel-chair ramps that were not really ADA approved. They’ve renovated some classrooms and the library (and) put air conditioning in the gym. There’s a lot of work (that’s) been going on at the high school and the students really have a better attitude when things go on (to) make things better. The start of school was really good this year.”
Webster said that he and CCHS Principal Michael Lee approached the Jefferson County Board of Education about making improvements at the high school, and that this has been in progress since last year.
“The county approved to put air conditioning in the gym at the high school, which we haven’t had since we’ve had the high school,” he said. “Brand new units. That was several thousands of dollars they spent. By the time (the school) starts basketball, they’ll be able to play in an air-conditioned gym. It’s really nice that the county has stepped up and spent some money on that.”
During the council comments portion of the meeting, Councilor Don Baker also recognized two Clay citizens on their contributions to the CCHS football program’s Kickoff Classic last Saturday.
“I attended the Kick-off Classic that the high school football program does,” he said. “There are some people out there that really need to be recognized. They’ve been consistent out there. Rod Pruitt, who is President of the Booster Club, cooked all day long, and Judge Alan Summers, (Jr.), he was out there. That was his ninth consecutive, I believe, consecutive year to be out there doing it. Those two are to at least be commended for the work they are doing in the community for all the kids and the school.
“Alan doesn’t have a dog in the hunt,” Baker added. “He hasn’t had one for two years. He’s consistent. He’s in there helping out just for the sake of helping out. His kids have come through Clay and he’s just a huge supporter.”
Baker said that the Kickoff Classic is a start-of-the-season scrimmage, with teams ranging from little league through high school varsity playing games throughout the day. The concessions also provide a fundraiser for the football teams.
“It was a hot day, but it should’ve been a good fundraiser for them,” he said. “It was a good turnout.”