BIRMINGHAM – A fire at the Kirklin Clinic has resulted in at least six vehicles being damaged, according to Carol Robinson. 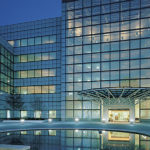 The fire occurred at the third floor of the parking deck at Sixth Avenue South and 20th Street. The fire caused a large plume of smoke to be seen throughout the Birmingham area. Birmingham Fire and Rescue responded to the incident after 1 p.m.

According to the report, the fire was contained after 20 minutes but at least six cars were severely damaged. No one was hurt but there are no details as to what started the fire.