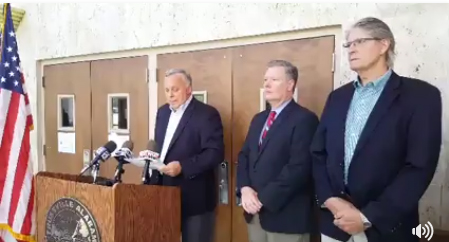 With the full council standing behind him, Choat explained the current status and next steps in the matter after an apparent failure of the Alabama Ethics Commission to complete the investigation in the allotted time frame.

“On September 30, 2016, after a preliminary internal examination, the city sent a letter to the Alabama Ethics Commission requesting an investigation into past financial and management matters involving the Trussville Volunteer Fire Department and certain city employees who assumed leadership positions in that organization,” Choat said. “While I will not go into detail due to the ongoing investigation, the general allegations involved the use of funds paid to the Volunteer Fire Department by the City of Trussville and, more specifically, the control of and use of those funds by city employees.”

Choat said the volunteer fire department was not part of the city, but the use of city funds allocated to the group raised concerns among city leaders following the internal investigation. Those concerns resulted in filing a formal complaint with the state ethics commission.

“The city stood ready, willing and able to assist and conclude the investigation as soon as possible and made regular inquiries to the Commission’s investigation team as to the status of the matter,” Choat said. “Unfortunately, over 11 months later, and despite the city’s best efforts to assist in the investigation, there is still no resolution and we are disappointed.”

Choat said that the Ethics Commission told the city that the investigation will not be completed within the state law mandated 360 day time limit and that no ruling will be issued.

“Nevertheless, the city continues to work to ensure the allegations are properly investigated by law enforcement to determine if any wrongdoing occurred and to bring anyone responsible to prosecution,” Choat said. “The city still has options to pursue and we fully intend to do so.”

Choat did not name the law enforcement agency that the matter will be referred to, but did say the Ethics Commission has assured the city that they would cooperate with information and manpower to whatever extent was required.

“Let me be clear, the council and I will do everything within our power to protect the citizens of Trussville of any impropriety,” Choat said.