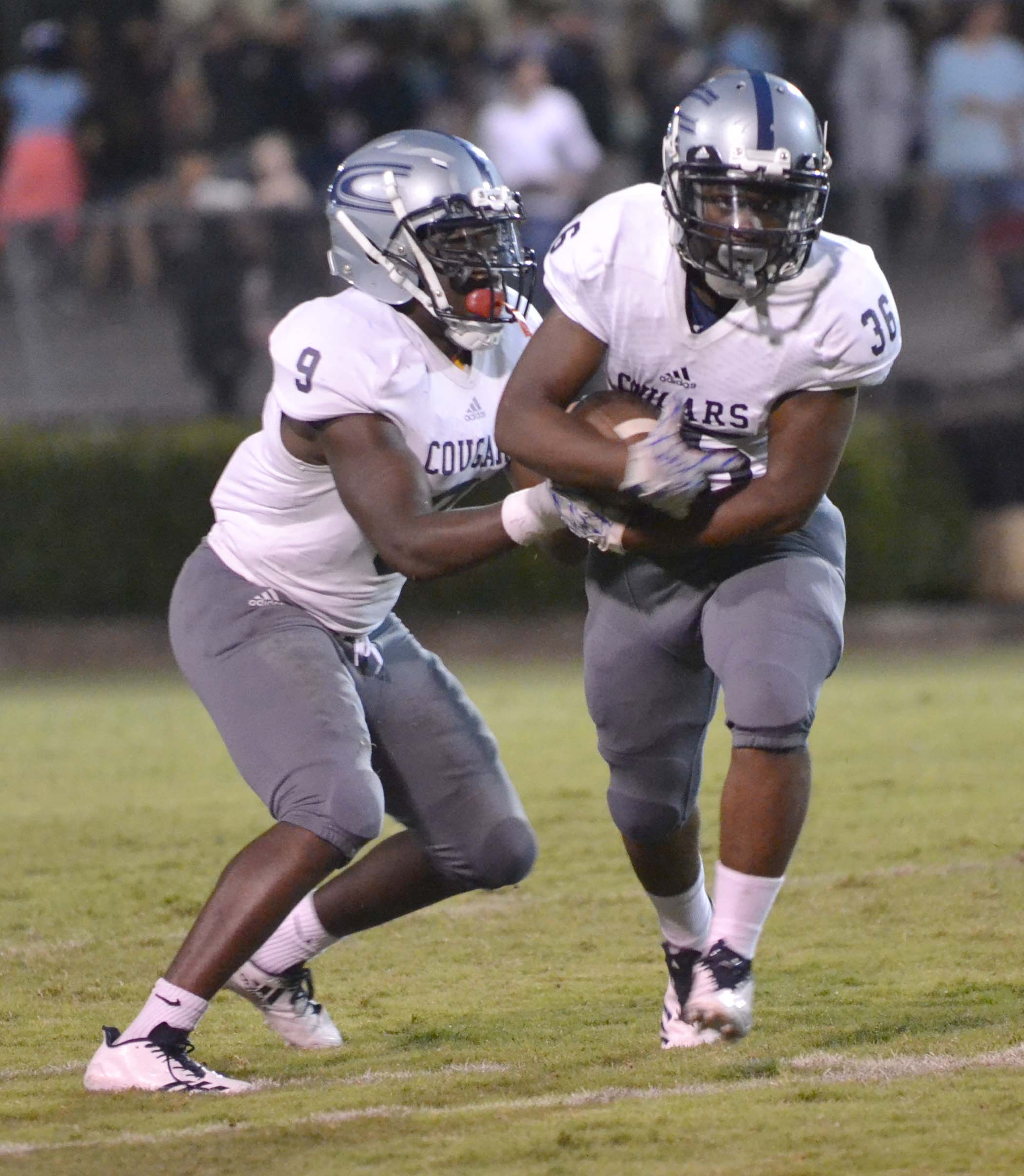 Quarterback Damion Ward hands off the rock to running back Jeremy Rice during Clay-Chalkville's 41-6 win over Jasper.

JASPER – Shortly after Friday’s game with  Clay-Chalkville got going at Ki-Ro/Gambrell Field, it was clear the Vikings were on a sinking ship. 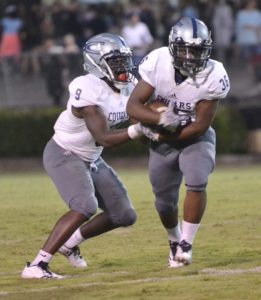 Quarterback Damion Ward hands off the rock to running back Jeremy Rice during Clay-Chalkville’s 41-6 win over Jasper.

Jasper was forced to punt time after time as the team went three-and-out while the Cougars consistently found a way to scratch and claw its way into the end zone in its first game this year against a regional opponent, a game that the Cougars won 41 -6.

Willie Miller was the first to put point on the board at the tail end of a 75-yard drive. His 6-yard scamper into the end zone would not be the last time he made referees put their hands in the air Friday night.

Lawson Hinkle had his own impressive short run for pay dirt shortly after the Vikings first of many 3-and-out series during the game.

On the Cougars’ third possession, the team got on the outer-rim of the red zone, but couldn’t pull off the touchdown hat trick. Regardless, a field goal allowed the team to end the first quarter 17-0.

Other ball handlers who were effective in moving the chains included juniors Courtney Braxton and Logan Pruett who had a diving catch on third down that set up Hinkle’s first-quarter touchdown.

“He really moved the chains for us in a crucial situation,” said first-year coach Drew Gilmer, who added that the big-time play was not the only clutch catch on third down that the 5’7” wide receiver made.

Another wide receiver with a big game on Friday night was senior Roderick McCloud who held onto a deep-ball pass into the end zone at the beginning of the second half.

“We did a good job of distributing the ball to our play makers,” Gilmer said.

The defense obviously did its job Friday, night holding Jasper scoreless until the final minutes of the last quarter.

“Defensively, we did a good job of leveraging the quarterback,” Gilmer said. “I though Leroy King  came in and did an outstanding job.”

“We just couldn’t get an rhythm on offense, Brunner said about his 1-2 Vikings. “And defensively we gave up too many big plays. We talked about that all week, that they were going to throw the ball deep and force us to cover them, and we weren’t able to stop the run.”

Brunner said he was proud that his team kept playing hard in the second half despite being so far behind. One bright spot during the night of Viking misery came with less than five minutes in regulation when senior running back Dylan Norris found the end zone.

Gilmer praised his offensive line that he said did a good job of sustaining blocks. He also complimented Clay-Challville’s special teams and kickers, that he said made a vast improvement over last week’s 43-20 outing against the Bessemer City Tigers.

“We did a lot better job staying in our lanes and covering  on kickoffs,” Gilmer said.

Other team members who Gilmer named as key players in Friday’s game were running back Kendall Moultrie and  defensive back Keyuntae Moultrie.

Next week the 3-0 Cougars will host Pinson Valley in a clash between two undefeated 6-A teams.

The Vikings next game also will be against the Indians since they have an open week before Jasper heads to Pinson Valley on Sept. 22.