TRUSSVILLE – With weather permitting, Children’s of Alabama will be hosting its DUI Experience at Trussville Playstation on Sept. 14 at 9:30 a.m. to 10:30 a.m. This year, Children’s – as well as State Farm Insurance and the Alabama State Troopers Office – invites students from Clay-Chalkville High School and Pinson Valley High School to attend. 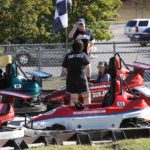 Students from local schools try out go-carts and googles meant to simulate DUI driving. Photo by Children’s of Alabama.

DUI Experience is a program that aims to educate the public on the dangers of driving while under the influence. Last year the event was attended by students from Springville, Thompson and Trussville high schools.

The program will have hands-on demonstrations, a guest speaker and teaching stations. The guest speaker at this upcoming event will be Alabama State Trooper Gary Daniel. Students will have a chance to experience what it’s like to drive while under the influence by driving go-carts while wearing “Fatal Vision” googles. These googles are meant to simulate impairment from drinking or taking illegal drugs.

Students will also have a chance to use a portable driving simulator from the University of Alabama at Birmingham, as well as an emergency room reenactment and an interactive game.

According to Children’s of Alabama, car crashes are the leading cause of death for teenagers in the U.S., with teen drivers having accident rates three times those of people who are above 20 years of age. Alcohol consumption, drug use and texting while driving are some of the leading causes of traffic accidents among teens.