Homicide suspect from Missouri captured in Greene Co., Ala

GREENE COUNTY – A suspect wanted in a St. Louis, MO homicide has been caught in Alabama, according to Carol Robinson. Andre Lemoyne Williams, 32, was apprehended in Greene County and is currently awaiting extradition to Missouri. 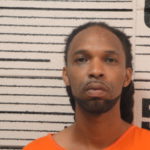 According to the report Williams was charged with first-degree murder in case of Eugene Roberts, 34, who was shot in St. Louis on Aug. 31. An eyewitness identified Williams as the shooter. He was later found in Boligee in Greene County where he was arrested without incident.

As he awaits extradition, Williams is being held in the Greene County Jail with a million bond. The arrested was assisted by the 17th Judicial Circuit’s Drug Task Force and the Eutaw Police Department.