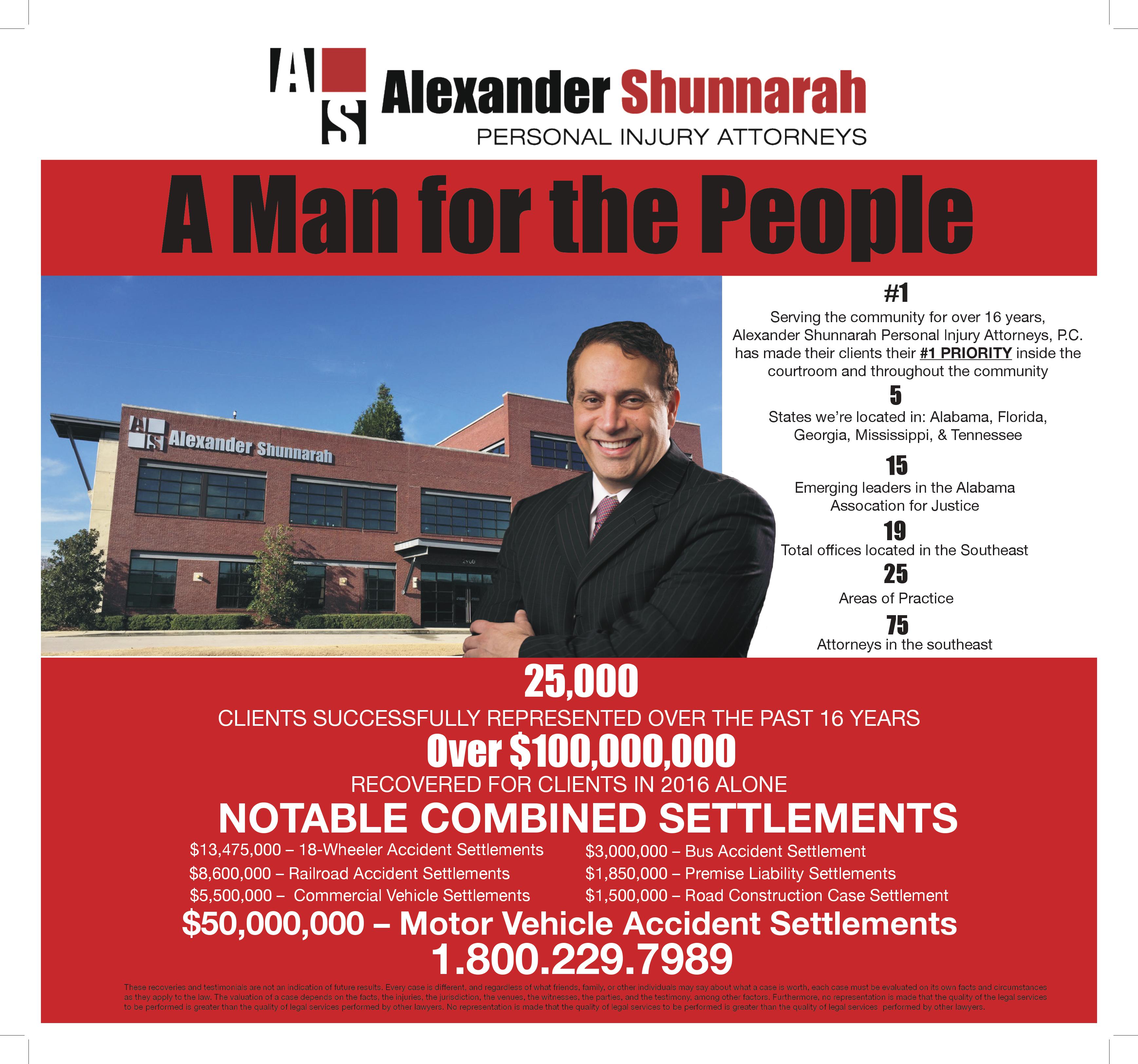 By Ryan Jennings
For The Tribune

With the recent explosion of high interval training (crossfit, cardio flex, barre etc) and along with the creation of fitness technology; everything from the FitBit to apps that count macros and map or track your running, it appears that the Health & Wellness “trend” isn’t only a trend, but rather a necessity in the life of Alexander Shunnarah. You might find it incidental that he appears in a special health and wellness issue, but underneath the surface of the southeast’s most well-known lawyer and marketing opportunist, lies a God-centered family man that is a huge advocate of living the healthy lifestyle. 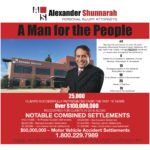 Before the interview “officially” began, he excitedly and passionately referred to how we were created in God’s image and how our bodies are a temple of the Holy Spirit, and eagerly proceeded to jump-start a conversation about our youth and the children of our nation: distracted by video games, social media, apathy, and obesity. Immediately, I sensed a true and genuine concern asking him where this passion comes from.

“I grew up on the southside of Birmingham and just like every neighborhood boy, from the time we got out of school, until the time it got dark, we played outside. I understand back then there were not too many obese children. You see a little bit of childhood obesity now with the advancement in technology, but I’m 50. When we were young, Atari is all we had . . . and it was boring. So we were very very active. I try and walk 10,000 steps a day now and I bet we clocked 30,000-35,000 steps as children without ever thinking. I bought my daughter Natalia a Fitbit and she’s only 10, and this summer I couldn’t believe it, but it was accurate and she would do 35,000 steps a day, because she never stops moving. That’s why my children are lean and muscular. We were designed as humans to move and not be sedentary.”

For some, a desire to live healthy comes naturally. But for most, unfortunately, it happens after a scare from a doctor’s visit. For others it’s just difficult to allow other priorities, responsibilities, or excuses to keep us from taking care of ourselves. ForShunnarah, it began with a good foundation. However, like most of us, the balance of work, raising children and other responsibilities create obstacles that eventually become excuses.

“When I became a lawyer I was pretty healthy and active until about 35 and then I had a bad run between about 35 and 44. That was the first time in my life I became sedentary to some degree. I was absolutely miserable. I was in the process of building my law firm. The first 8 or 9 years I was so overwhelmed that I put it (healthy living) to the side. It’s kind of like you’re making a choice but you are aware the choice you are making is not a good one. I would try to get back in (the gym) and would get pulled out, try to get in and get pulled out. And one day about six years ago, I woke up one day and just knew what it was and got back into it full force.”

One might find it difficult to understand how such a busy individual can find the actual time for such a commitment. After all, we all face the same challenges like balancing work and home. When asked about his time management and dedication to the gym, Shunnarah said, “I work out in the evening time. A lot of people do it in the morning because they get that energy rush. But I do mine at night because I work out and it’s my coping mechanism, it’s my stress relief and it puts me to sleep. I sleep really hard. I’ll get home and eat something clean like some boar’s head turkey and a spoon of avocado or something, and I’m out! And until I wake up, a hurricane could hit the house and I’m not waking up. I’m a light sleeper by nature, but when I work out I sleep hard. And when I wake up I feel refreshed. I feel great. Nobody feels great every day, but I’m on my game six out of seven days because of my routine.”

I was curious just how rigorous his routine might be. Without hesitation he described the previous night’s workout: “Last night for example was leg night and it was absolutely the worst,” he chuckled. “We did squats, deadlifts, lunges, step ups, leg presses, hamstrings, box jumps. I won’t feel it today but I will tomorrow. I mean we just killed our legs. I probably did 500 reps of something where your legs are incorporated.

I do a mix of stuff but in order to be healthy you have to incorporate it all, like the night before when we did arms, we finished with a 30 minute run.”

A common truth when it comes to working out, diet, and exercise, is that it not only provides the physical benefits, but most certainly stimulates the mind, mental aptitude and performance. “The explosion of the firm has actually occurred in the last six years, and that’s exactly when I got back into my health and well-being kind of ways. So, Is it coincidental? I don’t think so.”

A Shunnarah story regardless of theme wouldn’t be a story unless there was at least a little information on everyone’s favorite topic: The Billboards.

“It really came about with me looking for a new place to put my marketing dollars. I read an article in 2008 that said that the city of San Francisco city council voted and said they were not going to let publishers/phone companies, print those 5 million phone books and put them on the doorsteps of their 5 million residents. The people in the west are typically ahead of us when it relates specifically to technology. They know where this is going, so I’m going to follow their lead. The phone book advertising days were soon to be dead. I wasn’t necessarily looking at billboards, but Idid notice that there weren’t any lawyers on billboards at that time. I took it upon myself to research billboards because I was curious why the Coca Cola’s of the world, the Nike’s of the world, the Chik-Fil-A’s of the world, the McDonald’s of the world, the Apple’s of the world used billboards. And I realized it’s just a branding tool. It’s not a direct response tool.

You don’t put up a billboard and expect the phone to ring. However, I was trying to brand myself. And with billboards, the longer a billboard is up, the more effect it becomes. For a law firm like us that was established here in Birmingham, it was a long term plan. And in the law business it’s not seasonal, it’s 12 months. It’s literally every day of the week that someone could get hurt at work or be in a car accident. Also,I’m from Birmingham. The business is based in Birmingham. I am in the law business. I don’t plan on getting out of the business. I want to do this until I leave the earth. I actually enjoy what I do. I’m married. At that time I had a 4 year old, a 2 year old and a newborn. I just made a decision based on all of these things.

So at that time, the thinking was, my roots are established, I’m not going anywhere, so I’m going to try this outdoor advertising. Never anticipated, but I wondered if a law firm could actually build a brand, because I’d never seen it done.

At the end of the day, Shunnarah isn’t just a lawyer, an entrepreneur, business owner, employer. He is a husband, father, mentor and friend to many. In closing, he commented, “I’m just the kind of person that really believes in myself, and that any human being can accomplish anything they desire to accomplish. I’m realistic. I’m not gonna pitch for the Dodgers. You have to have certain tools and certain gifts. The movie “Rudy” is a great movie, but he only played one down.

The Bible says God will make room for your gifts and we all have gifts so we have a responsibility to find out what our gifts are. And one of the gifts I have is I genuinely love human beings. Even though it is the second commandment, it comes natural for me. I genuinely love human beings. I understand human beings are flawed because we are born with a sinful nature. We have pride and greed and lust and all of that, but I believe in the human spirit. I believe when people aren’t acting good, it’s because they are making a choice not to. They are allowing outside interferences to influence them. I instead choose to love people. I invest in people. The main reason I decided to do this interview with The Trussville Tribune was to use the platform God has blessed me with, to hopefully reach someone who is unhealthy and be their catalyst to a better lifestyle.”