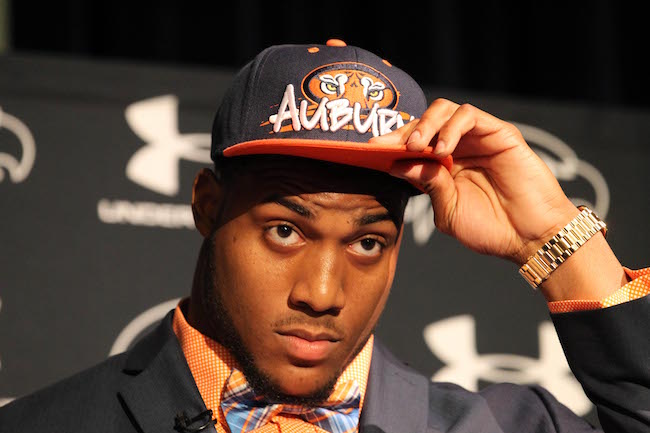 Byron Cowart announces his decision to play at Auburn on Feb. 4, 2015.(Photo by Kim Klement-USA TODAY)

Auburn defensive tackle Byron Cowart today revealed in an interview with al.com why he asked to be released from Auburn. The former five-star recruit said a health issue with which his mother is coping and the amount of playing time he receives in games led to his decision. 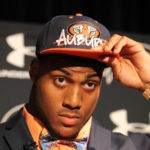 Byron Cowart announces his decision to play at Auburn on Feb. 4, 2015.(Photo by Kim Klement-USA TODAY)

Cowart said he will return to Seffner, Fla., his hometown, next week to resume his academic pursuits at an area school before transferring to another program.

“I can guarantee you football is not over for me,” Cowart said during the interview with al.com.

Cowart came to Auburn with high expectations.  247Sports ranked him as the No. 3 overall prospect in the 2015 recruiting class. However, in his three years with the Tigers, he has accounted for only 15 tackles in 26 games.

Cowart also failed to meet expectations off the field, when arrested in 2016 for second-hand possession of marijuana.

In a press conference today, head coach Gus Malzahn said Cowart approached him several times since the start of the 2017 football season to complain about the amount of time he was spending on the bench. Cowart has accounted for only three tackles so far this season.

News that Cowart was leaving the Tigers came one day after backup quarterback Sean White was dismissed from the team following his arrest in Auburn for public intoxication.

“Every time you have to dismiss a player it’s not a very good feeling,” Malzahn said today. That’s probably the best way to put it.”