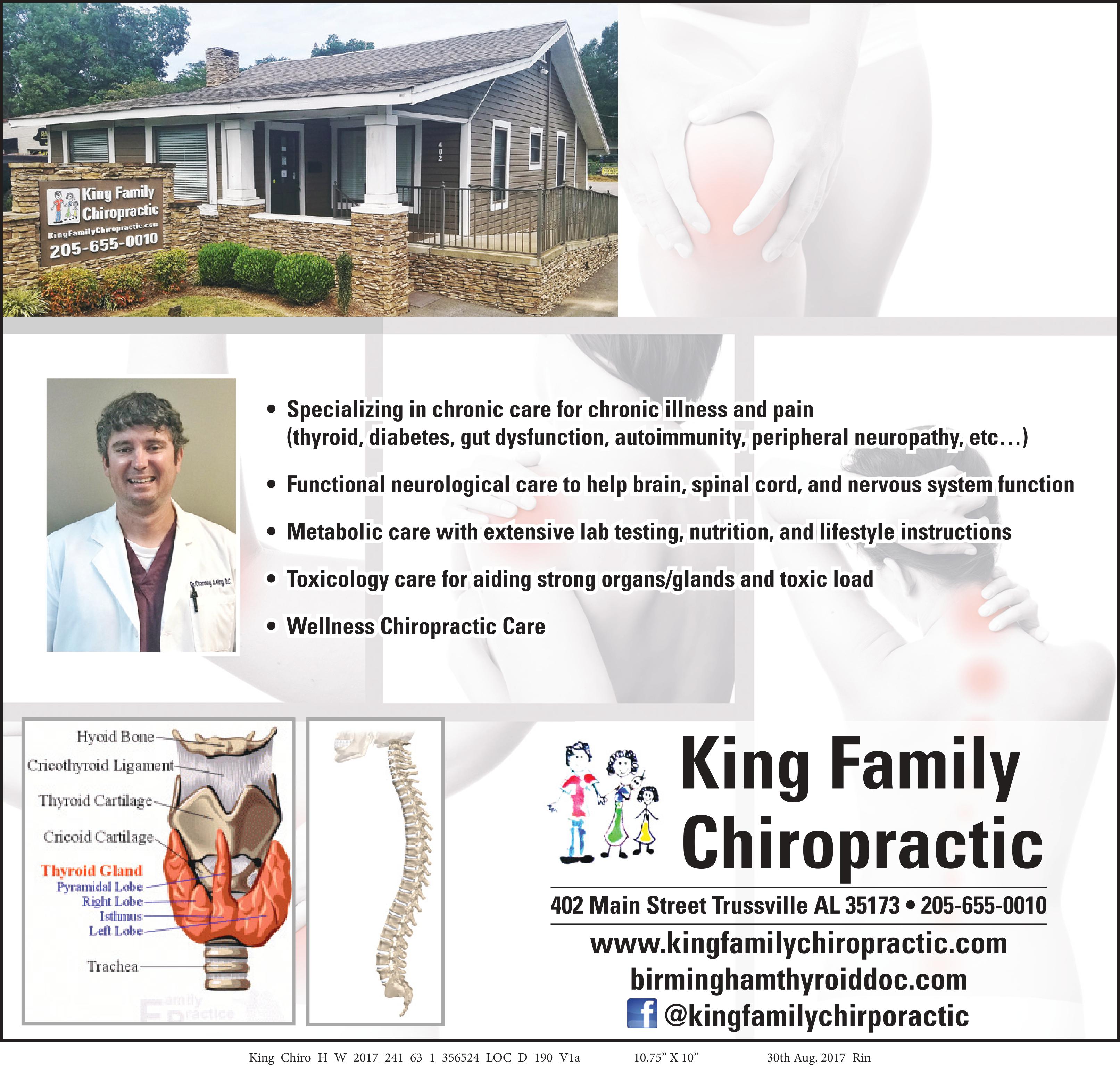 TRUSSVILLE – For those looking for a chiropractor that takes a more alternative approach to the practice, you don’t have to go much further than King Chiropractic located on Main St in Trussville. 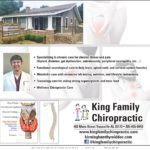 “I do see chiropractic patients but mostly see chronically ill patients with thyroid, adrenals, gut, diabetic, peripheral neuropathy type issues, etc.,” he said. “A good bit are thyroid patients. Most people that come to see me want to do it natural and get to the cause and not keep treating the effects or symptoms.”

King said that he does this through “a three-pronged approach.” Those approaches consist of metabolic, neurological and toxicology. Each “prong,” he said, has a treatment side and a testing aspect to it.

The metabolic aspect is what King called a traditional approach, which would be bloodwork, and the treatment side is when your doctor prescribes medication, recommends nutritional supplementation and dietary suggestions.

The other two aspects require a longer, more detailed description. With the neurological side of it, the brain is the central focus.

“We work with adults and kids who have chronic neurological disorders,” he said. “Through functional neurological examination we can determine where weak areas of the brain are and use treatments such as brain-based therapies, adjustments, and other neurological therapies to bring back a better balance and improve function.”

The left and right side of our brains can sometimes experience balance issues. Often, patients with issues in their brains are stronger in one side and weaker in another. This can create problems in coordination, pain, numbness, tingling, burning, visual issues, learning, mood and focus.

“If someone is functioning with a weak right side of the brain causing symptoms or dysfunction, we want to stimulate that side or area of the brain to improve its function bringing it back to balance with the other side,” King said.

And then there’s toxicology, a trickier thing because there’s been little testing and treatment that’s been effective, according to King.

King went on to explain that if a toxin somehow makes its way inside, the first thing the body is going to do is to try and get rid of it. A toxin can be expelled through breathing, sweating, urination or defecation. But sometimes these don’t do the trick.

If a toxin is not expelled then the immune system will try to attack it. But if that doesn’t work, then the body will implement a sort of “backup plan” where the toxin is taken out of the blood and stored into fat. From there it can migrate into the tissues.

So, if it gets into fat and tissue, how do you get it out? That’s where Field Control Therapy comes in, King said. This was developed by Dr. Salvey Yurkovsky, a board-certified cardiologist from New York still practicing today.

“What FCT does is it uses a different mode of analysis in treatment,” King said. “For example, the cells of the body communicate with each other to get things done. If your body needs to get something done, one way it does this is by transference and communication through hormones, enzymes – through chemistry. We can test this through labs like blood work and treat it through diet, drugs and nutritional supplements, but science has found that it is not the only way that cells work.”

King said that a biophysicist from Germany, Dr. Frizt-Albert Popp, discovered that cells communicate through frequency or energy. Healthy cells have frequency as opposed to an unhealthy cell, such as a cancer cell, which has little to no frequency and doesn’t communicate with others.

According to King, many people will still be feeling bad despite having a lot of blood work and testing. They are not “looking into the right chapter,” he said. FCT is a tool that can help with that.

“After this process, we are able to determine what areas of the body are under stress, if it’s from a toxin, what’s the nature of that toxin and where it is,” King said. “The process is science-based and very effective. I would not work with chronically ill patients without it. I know, using FCT, I can help you to a further degree than what I would be able to do without it.”

King stressed that our neurological health is an extremely important thing to keep an eye on. This is something that is very easy to overlook or ignore for many people in the world. King makes this a large part of his practice as a chiropractor.

“With neurological health, I do functional neurology,” King said. “Most chronic patients have not had their brain and nervous system checked. This system is so important because it is what God gives us that controls the function of the body. It is a missing link for many.”

King Chiropractic is located on 402 Main St in Trussville and can be reached at 205-655-0010. For more information, visit kingfamilychiropractic.com.