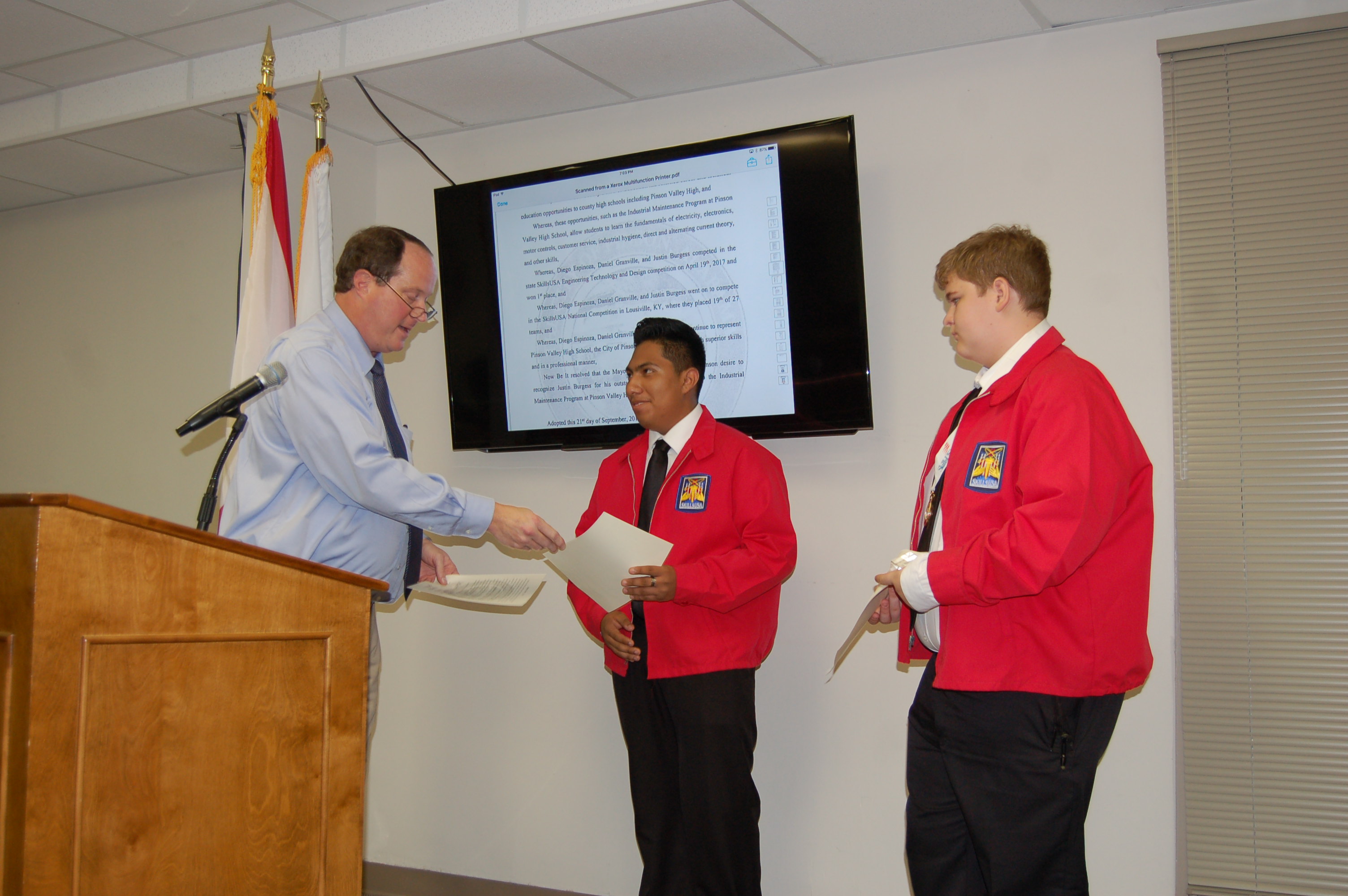 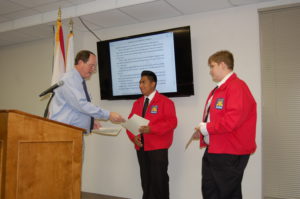 Diego Espinoza, Daniel Granville and Justin Burgess went on from winning first place in the state SkillsUSA Engineering Technology and Design competition April to the national SkillsUSA National Competition in Louisville, KY where they placed 19 out of 27 teams there. Espinoza and Burgess were present during Thursday’s regularly scheduled council meeting to be recognized.

According to the resolution, the Industrial Maintenance Program at PVHS is dedicated to learning, “the fundamentals of electricity, electronics, motor controls, customer service, industrial hygiene, direct and alternating current theory, and other skills.”

Later in the meeting, the council unanimously approved a request for additional funds by PVHS Exceptional Education teacher Elizabeth Martin for future trips to Special Olympics competitions being held throughout the state. Several of Martin’s students who won gold and silver medals were recognized by the council at a meeting on Aug. 17.

Martin said that the community has been supportive in donating money, including online from DonorsChoose where applications from her and another teacher were accepted and brought in $2,400 in funds. More funds were needed this year because of the size of the classes increasing, prompting the teachers to use two buses to transport students to competitions.

In his comments, Pinson Mayor Hoyt Sanders gave a report on progress on Palmerdale Homesteads Community Center, the Civitan Park and the Pinson Community Center. He said that work on PHCC to make them compliant with the American Disabilities Act has been completed with the exception of some rooms in need of painting.

Sanders also brought up the Civitan Park where he said that he has received a proposal from Pike’s Plumbing and Gas Services to install an ADA-compliant drinking fountain at the park along with an ADA toilet and an ADA Wrap kit. The overall cost would amount to $3,048.28.

Sanders said that he will appoint new members to the 2017-2018 Education Committee along with new assistants and PTA members. A meeting will be held in late October to present more information about the appointees.

The staff of Pinson Public Library will be celebrating the sixth anniversary of its founding with a celebration on Oct. 2 from 5-7 p.m. Scanlan said that the library will be partnering with the Literacy Council of Central Alabama to bring weekly English language classes to Rock School, located across from Pinson City Hall.

The next Pinson City Council will be held on Oct. 12 with pre-council at 6:30 p.m. followed by the regular meeting at 7 p.m.