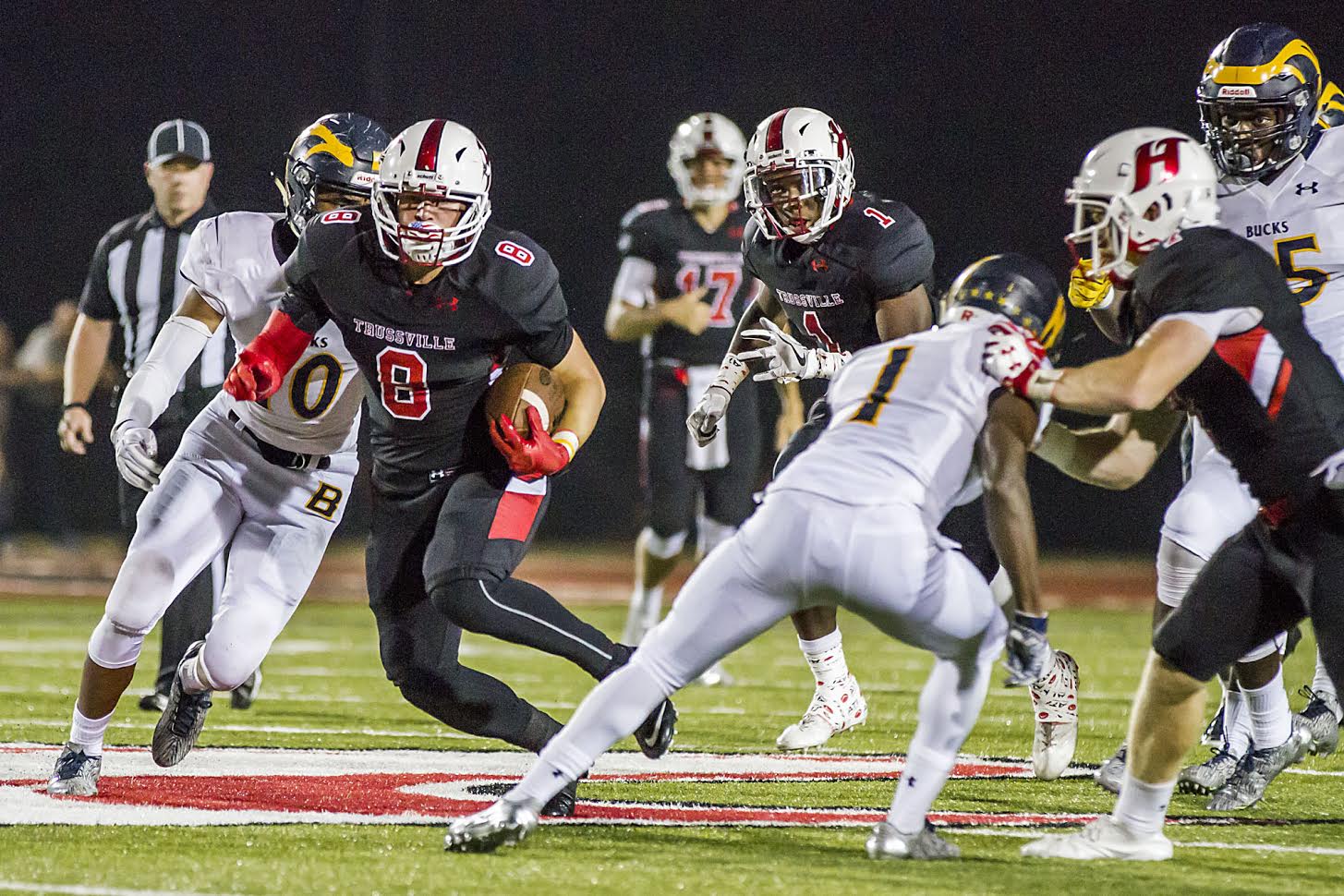 Elliott McElwain runs the ball during Friday's game against Buckhorn. McElwain rushed for 96 yards and one touchdown during the first half of the game. (Photo by Ron Burkett)

TRUSSVILLE— The Hewitt-Trussville Huskies move to 4-0 on the season with an easy 49-0 win over the Buckhorn Bucks. 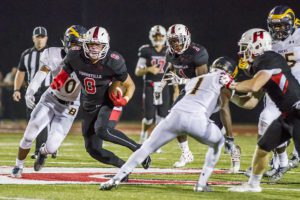 Elliott McElwain runs the ball during Friday’s game against Buckhorn. McElwain rushed for 96 yards and one touchdown during the first half of the game. (Photo by Ron Burkett)

The Huskies offense came into the game with a balanced approach, totaling 321 yard through the air and 204 yards on the ground. Junior quarterback Paul Tyson led the way, going 10-18 for 235 yards and three touchdowns. Grey Ryle stepped in during the fourth quarter and went 3-4 for 86 yards with a touchdown and a pick.

Myles Mason led the team in rushing with 87 yards on 3 carries, the longest of which was a 66-yard scamper on the Huskies second drive of the game.

Seven different Huskies tallied a reception, with the most notable of those receivers being Elliot McElwain, Michael Pitts, and Malachi Moore who finished with 96, 66, and 63 yards respectively. Defensively the Huskies recorded their first shutout of the year.

“It’s huge,” coach Josh Floyd said of his defensive performance. “Our coaches did a great job preparing those guys this week and I’m just proud of our guys.”

The Huskies led at halftime 35-0, which Coach Floyd described as “sloppy.” The Huskies first drive ended with a 14-yard touchdown run by Mason. The Bucks’ potent read option was able to move the ball, but the Huskies defense got a stop on fourth down at their 25. The Bucks would fail to move the ball the rest of the first half. Mason’s 66-yard run would set up the next Husky touchdown, a 7-yard pass from Tyson to McElwain.

The Huskies would score on their next three drives before halftime. The Huskies would encounter similar success in the second half with Ryle running the offense. Ryle’s first pass went for a 63-yard touchdown to Malachi Moore. He almost added another, as a Buckhorn defensive back wrestled the ball away from Nathan Reed in the end zone.