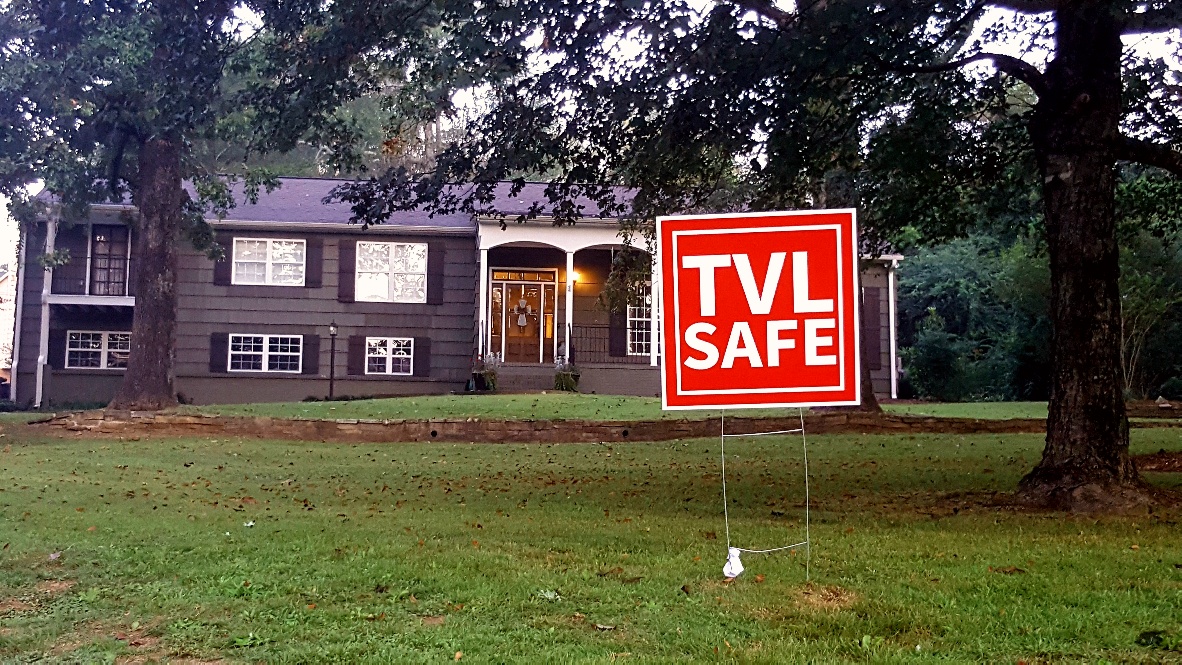 Yard signs for Trussville Safe are popping up all over town. Photo by The Trussville Tribune

TRUSSVILLE — Seemingly overnight, red and white lawn signs that read “TVL SAFE” have popped up in front yards across the city.

The placards, created as part of a grass-roots campaign called Trussville Safe, are meant to remind motorists to be more careful when they are on the road. 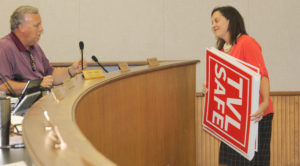 Kristi Jones, who is chairing the campaign, handed out yard signs at Thursday’s monthly luncheon of the Trussville Area Chamber of Commerce held at the Trussville Civic Center. Immediately after the event, signs had been already been planted by residents along Chalkville Road.

Jones hopes to plant the idea that drivers need to decrease their distractions — and their speed — while driving through the city, especially near schools and in residential areas.

“Every morning and afternoon we have so many children walking to school,” she said Thursday. “We’re redeveloping our downtown to be a more walkable city. But we don’t think, as drivers, about it being a walkable city because it’s not right now. But that’s our goal; that’s where we are headed, so we need to retrain the way we think as drivers so this new walkable downtown is safe for everyone.”

In addition to getting drivers to limit distractions and follow to rules of the road, the organization also hopes to encourage those behind the wheel to be more courteous drivers.

Since late August, Jones has been promoting Trussville Safe. She spoke with Mayor Buddy Choat before talking about the campaign at a Sept. 12 Trussville City Council meeting. Sponsors of the organization will also be present at the annual National Night Out for Trussville scheduled for Oct. 3, from 5-8 p.m. at the Target parking lot off U.S. 11. 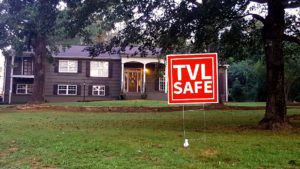 Yard signs for Trussville Safe are popping up all over town.
Photo by The Trussville Tribune

One Trussville Safe participant says she is pleased how the group’s message has been embraced by the public.

“This has kind of snowballed,” said Dianne Rotenberry, a Trussville Safe sponsor who was at Thursday’s Trussville City Council meeting where Councilor Alan Taylor read aloud a proclamation regarding the city-wide effort.

“We applaud the citizen-driven effort to make Trussville a community of safe drivers for the protection of our children and adults who share our roadways and walkways,” the proclamation stated.

Jones said several local businesses have been responsive in lending their support to the campaign. On Thursday, one of the group’s corporate sponsors, Eddie Seal, president of Jefferson Memorial Funeral Home and Gardens, donated his time as the sponsor of Thursday’s luncheon to promote Trussville Safe.

Jones said part of the inspiration for Trussville Safe came when she and her 7-year-old daughter had a close call with a driver who was not only driving too fast through the parking lot of Publix super market, but appeared to be texting while she drove.

Jones admits she too has found herself driving without giving the task her complete focus.

“The whole idea is to start a conversation about holding ourselves more accountable,” she said. “It’s about saying ‘You know, I need to pay more attention because this is important.’”