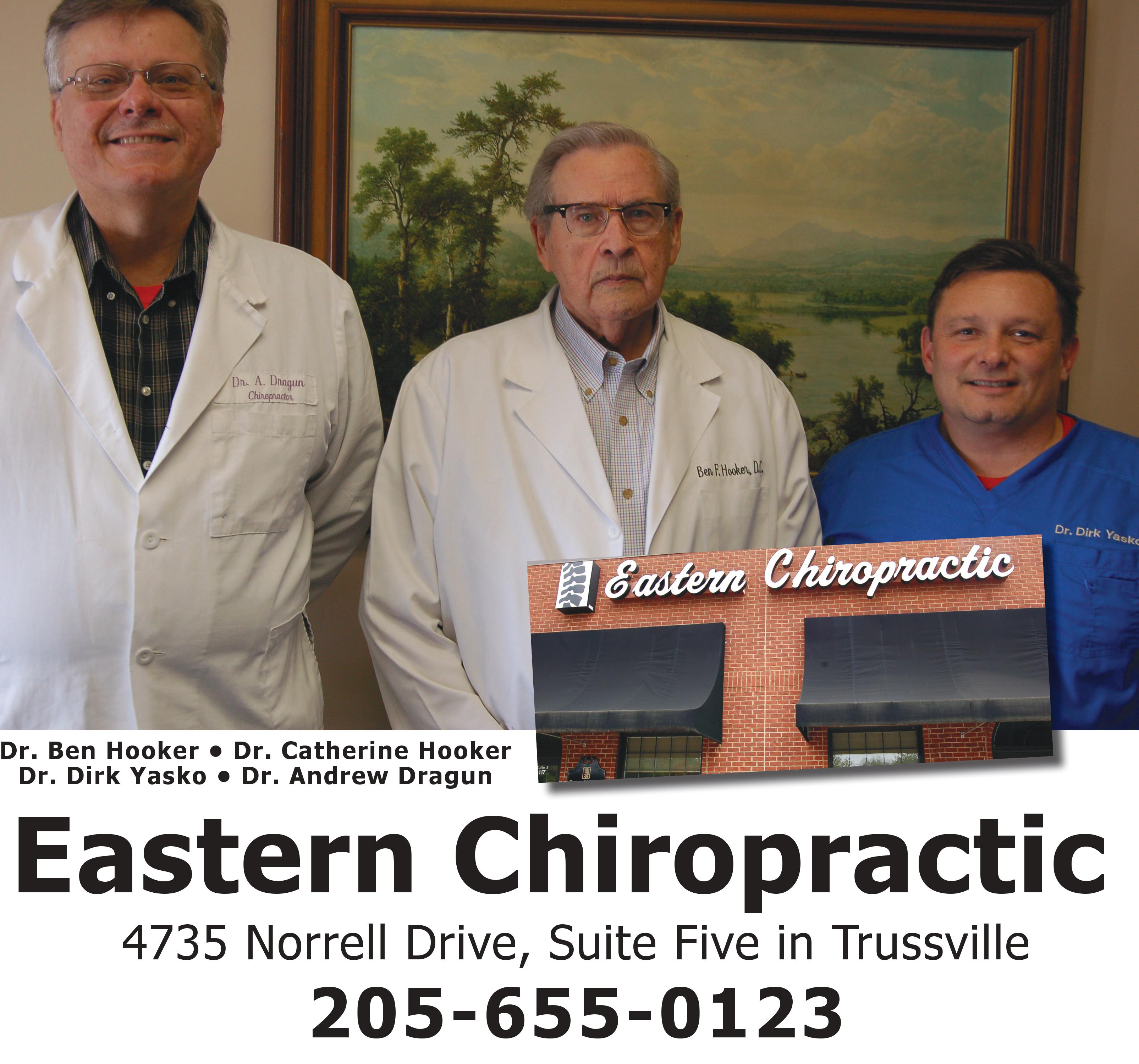 TRUSSVILLE — Eastern Chiropractic is a practice with a significant backstory. The practice was established in Trussville, but that is not where the story starts. It was originally started by Dr. Ben Hooker as Roebuck Chiropractic in the 1960s, but he decided to move it to Trussville when people in Roebuck began moving to the area. 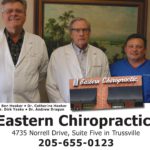 Hooker has been a practicing chiropractor for 57 years.

“The body is very capable of doing some wonderful things,” Dragun said. “But if something prevents that — inhibits that — what we do is look in the (musculoskeletal and neurological areas) and by looking at those, we can track down a path that’s not doing its job correctly. And as we open that up and correct it, the body responds as it would normally do.”

Dragun took an opportunity to brag on Hooker, saying that his colleague has years of experience which has allowed him to treat patients with certain conditions such as displaced spines that most other chiropractors would be reluctant to treat.

“It may also be stated that Chiropractic is more than just manipulating the spine to relieve pain. Chiropractic makes all body systems work in harmony,” said Catherine Hooker. “Such as Circulatory, Respiratory, Digestive, Muscular, Skeletal, Endocrine, Lymphatic and Nervous

Systems so your own immune system can heal from within holistically.”

Students of chiropractic will go to school to study the basics of the practice, but more often than not they choose a specialty on which to focus.

Dragun specializes in what’s called craniopathy, which he said only a “handful” of chiropractors in Alabama do. Craniopathy addresses issues with the skull. Some problems associated with the skull that he encounters are vertigo, balance issues and migraines among other symptoms.

Dragun said that treating patients is sometimes a team effort. There have been times when a patient comes in and it takes them all to figure out a solution together.

“A lot of people think, ‘My back’s okay. Why should I go to a chiropractor?’” Dragun said. “Well, sometimes the ankles need help or their knees have an issue, and if they don’t do something about it, it’ll become an issue. Or they have a problem in their elbow or wrist or shoulder and they say, ‘What’s a chiropractor going to do for me?’ There’s a lot that we can do for that.

And the neat thing is how we can work it together. There’s some things that I will do and take it to a point and then I can incorporate Dr. Yasko because he can do things I can’t do. He has experience that I don’t have. When you put them together and incorporate nutrition, all of the sudden you have a real mighty force trying to help the patient.”

Yasko specializes in treating conditions related to athletics. He said that he has been a coach and athlete himself.

“I have a background in athletics. I got into chiropractic because it’s saved me many times in competition,” he said. “I enjoy it all. We all co-manage and work together as Dr. Dragun said.”

Hooker introduced nutrition to Eastern Chiropractic. Nutrition is a vital part of taking care of the body. And when you’re not getting enough, your body will let you know about that.

Unfortunately, most people are not aware of this connection, according to Yasko.

“That’s a problem that most people don’t understand,” Yasko said. “Your body is trying to communicate the way — unfortunately we don’t listen — and when your body talks to you via a cramp, or a pain, or a twinge, or euphoria — whatever you want to throw in there — it’s trying to communicate, ‘I like this, I don’t like that, I need more of this, don’t give me that.’”

Yasko compared the body to the workings of an automobile to communicate how all systems work together. He said when something is wrong with a car, you may get a “check engine” light or something similar on the dashboard. The body acts very much like that when one requires more in the way of nutrients, exercise or other vital needs.

Eastern Chiropractic carries vitamins and supplements that are tailored to get optimal heatlth with chiropractic adjustments. The website for

Eastern Chiropractic is being updated to include an option to order vitamins and supplements from home.

Yasko and Dragun pointed out that a problem they encounter with some people is that they get warning signs that something is wrong with their bodies but they put off going to see a professional to do something about it.

Oftentimes, they say, people get caught up in their busy lives, which makes them put off getting treatment.
“The body is simple in nature,” Yasko said. “But complex in how it orchestrates itself. Let me put it this way: what if you drink too much water? What’s going to happen to your electrolytes? It’s going to throw them off and you’re going to get sick.”

Dragun gave an example of two patients with fibromyalgia, a condition in which a person experiences widespread chronic pain. He said that one patient who had been dealing with fibromyalgia for years made the decision to work with him twice a week for several months. The treatment was gradual but eventually worked.

On the other hand, however, there was another patient who had the same condition and waited too long in between visits, which only made her pain worse.

Eastern Chiropractic deals with the run of the mill problems that every chiropractic faces: back aches, headaches, muscle pain and other common conditions. But Yasko said that pregnant women often come in need of assistance.

With pregnancy issues, there are sometimes problems with the hips and spine, Yasko said. This is because the nerves in a pregnant woman can be inhibited and causes balance issues.

A chiropractor that makes adjustments on a pregnant woman’s hips and back and can help relieve pain, as well as help the baby keep developing normally in the womb. This can also make delivering the baby easier for the mother.

However, he said there is treatments that correct imbalances in the body.

“We’ve had people come in here and they’ve been studied around the U.S. We send patients out for epidural blocks, surgical evaluations, reconstruction because they have lost hope and we give them hope. And when they come back and they’re like ‘Oh my gosh, that was it.

That’s the greatest feeling in my opinion.”

Some patients that the staff at Eastern Chiropractic treat are those with neurological conditions, which includes those on the autism spectrum.

And with the advent of increasingly sophisticated technology, chiropractors are seeing what has been dubbed “Text Neck.” This is a problem in which people have neck and back pains from spending long periods of time looking down on their cell phones.

“We are seeing more of these patients frequently and are able to provide them relief,” said Catherine Hooker. “Our office not only performs adjustments of the spine but we also do cranial adjustments to relieve migraines and TMJ Conditions.”

Other conditions that patients experience include vertigo, problems with the extremities and “frozen shoulder.”

“Our office also adjusts some patients ears to alleviate and assist in the treatment of vertigo. We also do adjustments on extremities such as fingers, toes, knees, ankles, wrist and shoulders,” she said. “We have had many patients with a condition known as frozen shoulder that are able to come in for chiropractic treatments. These specific treatments are to break up the scar tissue and resolve mobility issues to prevent the patient from having surgery.”