Birmingham Police detectives are conducting a homicide investigation into an incident that happened Tuesday in the 2600 block of Tempest Drive adjacent to the Forest Hills Village apartment complex that resulted in the death of a 1-year-old girl. 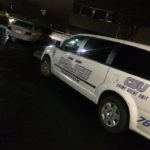 Around 4 p.m. Tuesday, officers from the West Precinct were dispatched to Children’s Hospital because of a non-responsive child. There, police were informed by the hospital staff that the victim was transported to the hospital by the victim’s mother and medical treatment was administered to the victim who was later pronounced deceased.

Detectives learned the victim had been left at home with an acquaintance of the mother.

The mother’s acquaintance said he found the child unresponsive when exited the home’s shower, according to Birmingham police. The acquaintance also said the victim’s mother came back to the house and decided to transport the child to the hospital.

Both the victim’s mother and acquaintance were brought in to police headquarters for questioning.

No arrests have been made at this time.

Jefferson County Coroner’s Office on Wednesday ruled the death of the victim a homicide. The death was caused by blunt force trauma.

Anyone who has information pertaining to the case is urged to contact the Birmingham Police Homicide Unit at 254-1764 or Crime Stoppers at 254-7777.